T-Guard is CEO and co-founder Ypke van Oosterhout’s life work. He told us about the technology that he has been developing since his graduate studies.

It was during his post-MSc research that Ypke van Oosterhout ‘discovered’ T-Guard, a technology which neutralizes rogue T cells. Seeing its clinical potential, Oosterhout took the concept and ran with it — T-Guard became the subject of his PhD and then the foundation of his previous commercial company, Immunotoko.

Since it was acquired by Henogen (now Novasep Belgium) in 2004, Oosterhout founded a new company, Xenikos, in 2009 to further refine T-Guard as a treatment for acute graft-versus-host disease (GVHD) and other orphan diseases.

We talked to him about his technology and company outlook.

What exactly is T-Guard?

It’s an antibody-based combination product to swiftly and safely remove hyper-reactive or misdirected T cells in patients suffering from T cell-mediated diseases like transplant rejection or certain autoimmune diseases. T-Guard consists of two monoclonal antibodies (mAbs) that home in on CD3 and CD7. These are both individually conjugated to ricin toxin A (RTA).

The combination of two ‘immunotoxins’ that act synergistically to kill their target cells is what makes it special — it’s only the second immunotoxin combination ever to be tested in the clinic. 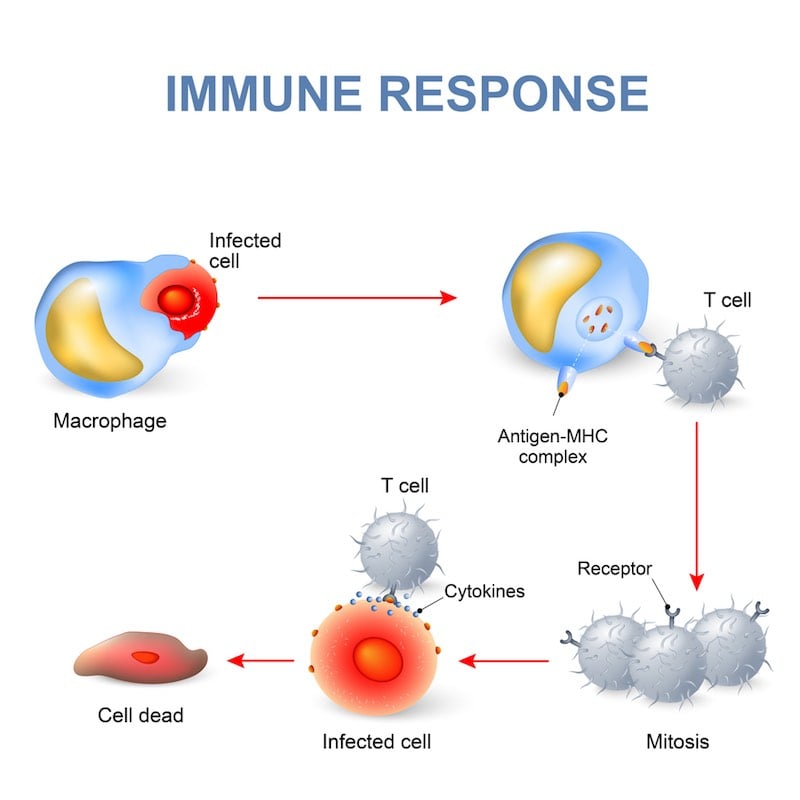 How does T-Guard work?

Each mAb has an important role. The anti-CD3 one provides immunosuppression independent of the RTA-induced cell killing through its action on the CD3 complex, which plays a central role in the antigen recognition process. Since CD7 is overexpressed on recently activated T cells and under expressed on anti-viral T cells, it is a good target to kill disease-causing activated T cells while sparing ‘normal’ antiviral T cells.

Selection of RTA — that is, only attaching the A chain of the ricin toxin — is also necessary. The B chain is responsible for binding to eukaryotic cells and internalization of the toxin; once that happens, the molecule is irreversibly bound to its internal target and causes cell death. However, we’ve replaced the B chain with these specific mAbs to select for diseased cells and leave the bystanders unharmed.

What are its target indications?

We’re trying to treat patients suffering rejection following transplantation with allogenic hematopoietic stem cells — that is, cells derived from a donor rather than the patient. It’s a common procedure for cancers of the blood and immune system. It used to be known as a bone marrow transplant, and it is performed to help fight leftover leukaemia cells in an effect known as Graft-versus-Leukemia (GVL).

However, the donor T cells that come with the stem cell graft might identify the healthy patient tissues as foreign and attack them in what is known as Graft-versus-Host Disease (GVHD). It can be either acute or chronic, with the acute form typically occuring within the first 100 days after the transplant. The first-line therapy is a corticosteroid, but the patient doesn’t always respond; the prognosis for these patients is typically very poor.

Lack of response is the biggest danger after an allogenic stem cell transplant, because there is no approved second-line therapy. Patients in these cases are typically treated with off-label or experimental agents that either deplete or suppress the immune system, and they can induce tolerance. Some of them are effective at treating GVHD, but with less active T and B cells, the patient is vulnerable to life-threatening opportunistic infections. So, there is a clearly a high unmet clinical need.

What results have you seen in the clinic thus far?

We just completed a Phase Ib/II trial in The Netherlands and Germany, co-led by Dr. Walter van der Velden of Radboudumc in Nijmegen. We’re still preparing the formal report, but the preliminary data show that T-Guard has a favourable tolerability and safety profile, with very promising clinical efficacy.

By Day 28, we saw a high Complete Response rate, an important and commonly used surrogate endpoint for acute GVHD studies. We also observed a substantial increasing 6-Month Overall Survival compared to controls. As a company, we plan to present the results later this year.

Editor’s Note: Walter van der Velden commented, “The preliminary results we have seen with T-Guard are very encouraging. From a conceptual point of view, it is interesting to see that a complete remission of even severe acute GVHD can be achieved by using a short course of targeted therapy. Faster immunoreconstitution after achieving a response might prove beneficial as it can influence long-term mortality that is related to complications such as infections and relapse of the underlying disease. We are looking forward to the start of the multicenter active-controlled pivotal Phase 2 study that is scheduled in the end of the 2017.”

Are you going into any other areas?

In principle, our technology could also be applied to the rejection of solid donor organs. The reaction is caused by the same type of T cells, though the patient’s tissue attacks the donor’s in this case. Similarly, patients with T cell-mediated autoimmune diseases not responding on regular therapy might benefit from a T-Guard treatment to rebalance their immune system.

What sets T-Guard apart from its competitors?

Beyond its characteristic use of a combination of antibodies, we’ve seen that it’s able to induce impressive and durable responses after just a week of treatment. Importantly, both non-clinical and clinical observations suggest that T-Guard seems to spare anti-viral T cells over the disease-causing T cells that are attacking healthy tissues..

T-Guard has a short serum half-life of only 7 hours, so it’s rapidly cleared from the body. After this period, new non-disease-causing T cells can be formed, as the immune system has been reset. If these characteristics are confirmed in further studies, our strategy would have the advantage of providing a more targeted immunosuppression of shorter duration than the current methods, which tend to induce a more general immunosuppression of longer duration.

What are the next steps in the development of T-Guard?

Preparations for a Phase II study are underway, and it’s expected to start by the end of the year. We’ll look at its performance compared to the best available therapies. The results thus far have sparked the interest of several renowned EU and US transplant centers that now want to participate in the study.

In the meantime, we’re addressing a request from investigators to reopen the Phase Ib/II study in a simplified form to enable the treatment of patients with severe acute GVHD until the start of the Phase II study.

Moving forward, we think T-Guard could be applied earlier in the course of the disease. There is an increasing number of biomarkers being developed and validated, and they could be used to identify acute GVHD patients at high risk of not responding to steroid treatment. For these patients, it would make sense to apply T-Guard in combination with the first-line steroid treatment. This method would hopefully prevent irreparable damage to the organs and immune system.

Overall, we’re confident that T-Guard will fulfill its promises and, together with other developments in the field, it will hopefully improve the treatment of patients with this devastating disease.

Thanks to Ypke for taking the time to tell us about Xenikos and its technology! If T-Guard sounds like a useful addition to your work, drop the company a line, or meet Xenikos at BIO-Europe Spring 2017!