How do you manage a planet with a growing population with increasing consumption needs when you only have a limited amount of ressources available? Everybody knows it’s a never-ending debate, but some companies are grabbing their chance to change the world. Ynsect is one of the many firms trying to do so, and could be a future champion of the Yellow Biotech field!

Let’s start with these figures and let’s keep it simple. We’re wasting a lot of food! The reason is often because we don’t like “ugly” products. Distributors and sellers throw food away in order to make consumers happy by meeting their high expectations. Customers, therefore, are pushed and incited to buy more appealing, nicely-shaped and colored products (okay, I’ll admit this is another topic to debate). Then, you have this huge amount of cheap, unused, available “ugly” food, with which you can feed insects (because they like it of course, but more importantly they do not care about the appearance of what’s presented to them. If it’s edible, it will be consumed!). The company Ynsect has found a nice way making money out of these leftovers. The price for fish-food is constantly increasing and the current diet of aqua-cultured fishes is mainly composed of soya meat (which sounds strange, as a soy diet doesn’t represent a fish’s natural diet). One can only imagine very unhappy fish being held in captivity, requesting much more appetizing meals!  At the top of any fish’s wish list: insects! and that’s where Ynsect found a genius idea. They feed insects with our wasted food and then sell the plump insects as fish-food! 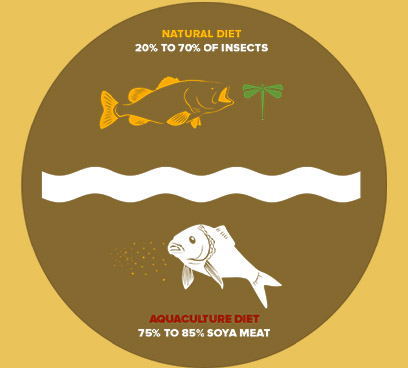 But when you try to disrupt a market, it’s never easy. Currently only pet food applications are authorized in Europe for insect products. So the only available product of Ynsect, the TMP-Y365 (yes the name sucks!) only goes to pet food applications. To change this situation, Ynsect became a founding member of Ipiff, the International Platform of Insects for Food and Feed, which tries to change the European legislation about insect products. A nice way to say that Ynsect is lobbying with several other insect producers to change the current situation and legislation, and here, I think it’s worth it!

Ok, now you have the big picture of the problem Ynsect is trying to solve, we can now focus on what they actually do.

Their product, Ynsect TMP-Y365 is a source of protein, fat and fiber that can feed our pet companions and our lovely aqua-cultured fishes…  Well, it seems that the TMP-Y365 is basically a slop of Tenebrio molitor; you know, this larvae we use to fish. So, where is the biotech inside this magical solution?

Ynsect has developed a real expertise regarding insect transformation. Insects are made of protein, lipid and chitin. The downstream processing part of the insect biorefinery consists in the extraction and purification of insect bioproducts. This downstream processing comes in after the larvae have been harvested and cleaned to separate the different valuable materials, as they target different markets. This is where the Ynsect’s project becomes really interesting! Since the beginning of this article I have been talking about feeding fishes. That’s a good opportunity for Ynsect, but the real potential and vision of the company goes way beyond!

In some regions of the world, insects have been traditionally used as pharmaceuticals or even as cosmetics. Given the tremendous insect biodiversity, it is sure that insects synthesize molecules. This, of course, can be of a great interest for green chemistry markets, like the chitin which can be use as a biopolymer. Ynsect also aims at developing bioactive compounds from insects, like chitosan, glucosamine or chitooligosaccharides, to enhance animal, plant and human health and well-being. Some studies are already emphasizing the importance of the impact insects can have on fish health. The company claims to be investing a lot in R&D for these specific topics.

Ynsect’s insect bio-refinery would use only natural resources and generate almost no waste at all (even the insect manure can be valorised as a fertiliser). This environmentally friendly approach could help reduce the levels of CO2 emissions usually associated with traditional production of nutrition for animal feed, plant nutrition, nutraceuticals and many other related areas… in theory. Because in reality, the project is still at an early stage. The company plans to open a demo-plant in early 2016 and develop an international partnering campaign. According to an information they gave to the MIT Technology Review,  this world’s first fully automated large-scale insect production facility, should be capable of producing 10,000 tons of dried protein meal, liquid fat, and chitin-derived products from insects each year. So here is how Ynsect came to this point: 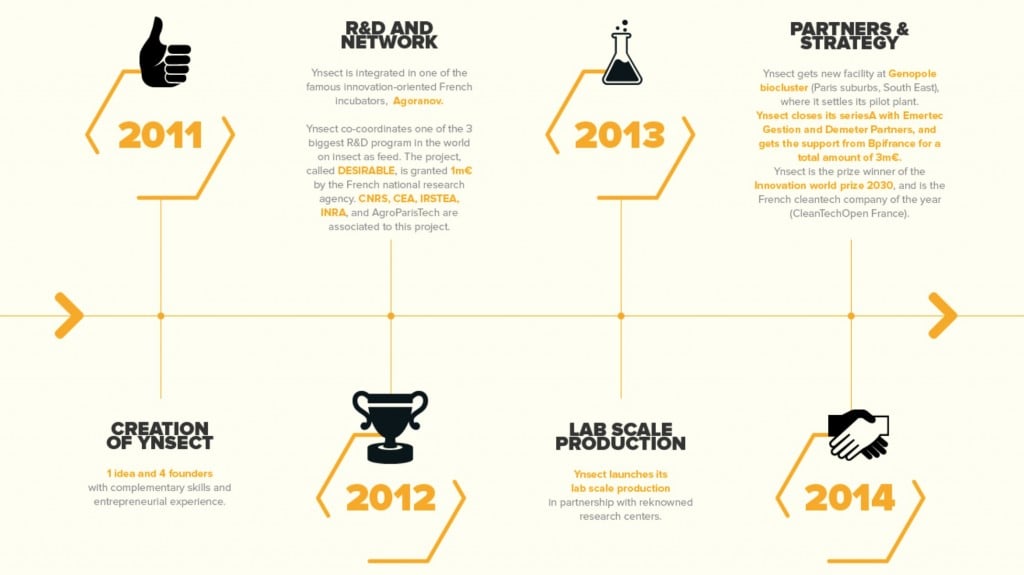 €7,3M have been raised in 2 investment rounds both concluded within 9 months only, with two French Venture Capital funds (Emertec and Demeter Partners) and one Singaporean investment company (New Protein Capital). Together with public support, in particular from the French investment bank BpiFrance, Ynsect affirms leading the first investment and capital in the insect industry worldwide.

I think Ynsect has bright days ahead of itself should they succeed in developing strategic partnerships and an innovative product portfolio. Competition seems already rude, with other companies like Enterra or Protix Biosystems entering the race. The winner will surely be the one who succeeds to produce large amounts of insect food at a price more advantageous to what current soja meals offer. Using insects is surely a good way of innovating. I hope the project of Ynsect will succeed as it can change and disrupt the animal food market for the better.

If you want to find out more, take a look at this cool video made by Ynsect: