The University of Cambridge is world-famous, but unlike its US equivalent, the city isn’t as well known for its startup culture. Jason Mellad, CEO of StartCodon — a new accelerator based there — believes the area is a great place to set up a new biotech.

“When I arrived in 2004, there were several people, particularly from the Cambridge Angels and some of the early programs like iTeams, thinking about how entrepreneurship should be something that’s encouraged and I was fortunate enough to ride that wave,” he told me. That said he agrees that an entrepreneurial attitude hasn’t always been Cambridge’s way.

“I would say that maybe previously it was frowned upon and there might still be some academics that think that ‘commercialization’ is a dirty word. I believe Cambridge is a completely different place now, full of startups, full of spinouts, full of ambitious people who really want to take these things off the bench and progress them.”

Mellad is originally from the US and came over to Cambridge to do a PhD. After working as a postdoc in London for a couple of years, he decided to move over to work in the more entrepreneurial side of life sciences in the biotech industry.

“In my mind, I always had one foot in science and the other foot in business, so it was a natural transition for me after I ended my PhD to be thinking more entrepreneurially and considering industry. I originally started off hoping that I would become a professor someday like my dad, but I quite quickly realized that it wasn’t where my heart was. I love the science, but I really enjoy being closer to the coalface of translating research rather than just the more theoretical side that you tend to find in academia.”

After trying out a few different options, including a brief stint at the diagnostics company Horizon Discovery, Mellad joined Cambridge Epigenetix, a small diagnostics-focused biotech based in the city. Starting in business development, he was quickly promoted and went from being its third employee to CEO within five years.

Mellad believes his business development skills served him well as CEO. “It taught me how to focus and define which direction the company was heading and come up with a plan, as well as how to hire a team to help us achieve it.”

He says he could not have achieved success without the support of his board and the company chairman. “It wasn’t as if I just woke up one day and I was CEO. Instead, they said, ‘Jason, we understand you have the strength, you have the background, we think you’re ideal to do this and to really pivot the company in a new direction, but we’re not just going to leave you on your own. We’re going to give you the support you need to be successful.’ That was essential.”

Taking inspiration from his own experience, Mellad decided at the end of 2018 that he would like to help others to achieve their entrepreneurial goals rather than heading up his own biotech and helped to found the new accelerator StartCodon.

“My happiest times at Cambridge Epigenetix were getting things started from scratch – both when I first joined, as well as when we pivoted into the new direction. To be able to help other companies do that again and again and again was an amazing opportunity. I said, ‘This is what I want to do, this is my calling.’”

There are a number of terms used to describe organizations that provide help and resources to new startups and knowing what they do can be confusing. However, in general incubators are more ‘hands off’ in style and provide office space, lab space and perhaps some mentorship, whereas accelerators are more focused ‘hands on’ programs that often invest in the companies they support.

StartCodon fits into the accelerator category and has its first intake of companies this year. It will support 10 companies a year that are between seed stage and Series A fundraising, giving €274,000 (£250,000) in financial support per company.

Of course it is possible to make it without the support of an accelerator or an incubator, but they can be invaluable to new startups. “It’s a very efficient way to leverage resources that most startups benefit from, but they often don’t know where to go or where to begin to access them. Whether it would be legal support, R&D guidance, intellectual property, team building – you name it – there’s a lot of knowledge that’s around and having a program like ours focuses it and makes it easily accessible to these companies.”

Mellad emphasized the importance of networking and collaboration within the community. “We have extensive partnerships with multiple accelerators, incubators and beyond, and investors as well. That means that companies that come to us, we are either working with those other parties or we’re making recommendations for companies who may not be right for StartCodon to approach those other parties and we’re happy to make those introductions. That way, we make sure we have a community.”

Knowing where to go to get funding can be tricky for new startups. Mellad advocates networking and building personal relationships in the first instance.

“I would recommend that any young startup founder spends the time to get to know investors, to take onboard their feedback, and to really look for people who are going to complement and help drive them to achieve their goals.”

He explained that it is all about persuasion and influencing, particularly if a company’s research and development is at an early stage. “Ultimately, it comes down to trust and belief in the individuals, the founders, the individuals who are running the project. Investors are weighing heavily on their gut feeling as opposed to years of data or looking at sales figures because the companies are so new.”

Another thing that is very important at this stage is for founders to know their worth and be willing to listen to feedback.

“Have self awareness and appreciate the stage that your company is in, know that there is potential, but don’t think that you have more than you’ve been able to demonstrate. Investors are looking for great potential, but they also need to see that you’ve validated and have proven yourself. They won’t just take you at your word.”

In his experience, Mellad says it is common for founders to value their companies incorrectly and that their estimations can differ depending on their background and gender.

“Women tend to undervalue themselves greatly and men tend to overvalue themselves. If I had to say, from all the companies that I’ve seen pitching – this is my personal experience – it’s more common for me to find female founders who have something really amazing, but they’ve undersold or undervalued what they have. It’s also more common for me to find male founders who have over-egged their position. As a whole, overall, there are exceptions either way, but that’s the general trend that I’ve seen.” 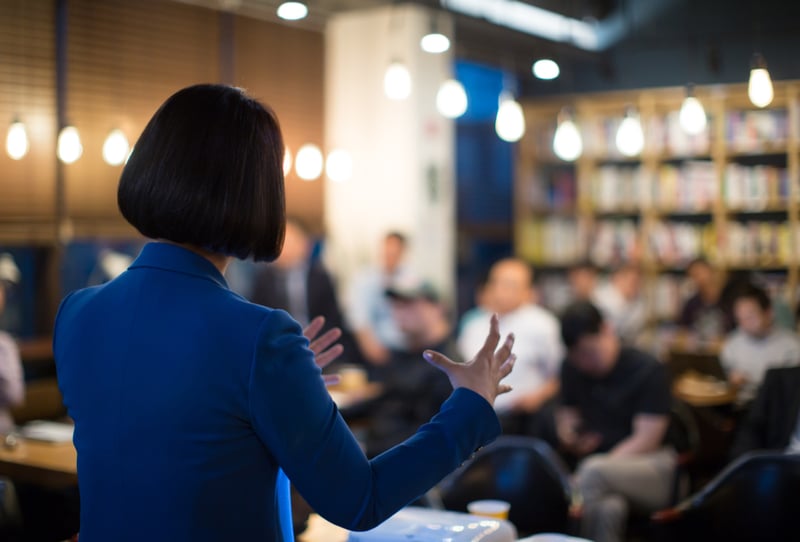 Getting constructive feedback from more experienced people can really help with the success of fundraising, emphasizes Mellad. Additionally, he believes one of the best ways to help your startup succeed as a founder is to recruit a diverse team of people.

“There’s been more than enough empirical evidence to show that diverse teams, whether it be gender, ethnicity – the lot – perform better commercially, so all founders should be keeping that in mind. I’m always encouraging every company that we evaluate to consider how important diversity is, not only for the founding team, but for building the company.”

Looking back on his career, Mellad says one of the things he wishes he had done more when he first worked in the industry was to speak up more and don’t give in to self-doubt.

“I always encourage my team members, ‘I don’t care if you are the most junior scientist or sales person… If you have an idea, if you think that we could be moving in a better direction or just want to suggest something new, speak up and say it.’”

He is also a huge advocate of mentoring as a method of self improvement. “I have a personal philosophy of paying it forward because when I was younger, throughout my entire career and my life, if it weren’t for some very key, near and dear mentors in my life, I wouldn’t be here where I am today. The only thing that my mentors ever asked of me was to pay it forward to the next generation.”

While StartCodon is still in its infancy, Mellad has high hopes for what it can achieve. It is just one of the new generation of entrepreneurial organizations in the city. With a combination of experience in academia and biotech, as well as an infectious enthusiasm for the sector, he’s well placed to make it a success

“There’s quite a buzz in the city and there’s a strong desire to replicate what you see in Silicon Valley and Boston in the US. In Cambridge today, you see more and more professors, both new and established faculty members, saying not only do they want grants and publications, but, ‘I want to have a spin out. I need to be thinking about partnering with the industry.’ It’s a very different mindset.”