Thomas Bold, CEO of RenovaCare, shares the story of how his team developed a futuristic stem cell gun to heal burns and wounds.

Inside the building that used to be home to Berlin’s Tempelhof airport, whose abandoned runways are regularly visited by picnickers and skaters, an American and a German company are collaborating on the development of a technology that seems taken out of a sci-fi novel: a gun that can shoot stem cells onto second-degree burns to heal the skin faster than ever before.

It all started when the scientists at the Tempelhof lab took on a government-funded project to grow human skin on bioreactors. “A nice idea,” says CEO Thomas Bold, “it just didn’t work.” His team had been selected for its expertise in growing liver cells in bioreactors to use them as dialysis support systems for patients awaiting a transplant. But skin cells turned out to be tougher to tame.

“It was a nightmare. We were sitting there day and night thinking about it,” he recalls. “It was about three or four weeks before our midterm presentation, and we were desperate, when, all of a sudden, somebody stood up and said, ‘let’s use the wound as a bioreactor.’ And here the idea was born.”

With a new plan in place, the challenge was to keep the cells alive until they were transferred to the wound. The team found out that commercial systems could only keep 50-60% of the cells alive. So they decided to design their own. After multiple prototypes, the team came up with a device that distributes the cells evenly and gently enough to keep over 97% of them alive. And it turned out looking a lot like a laser-gun that might well appear in the next Star Wars movie. 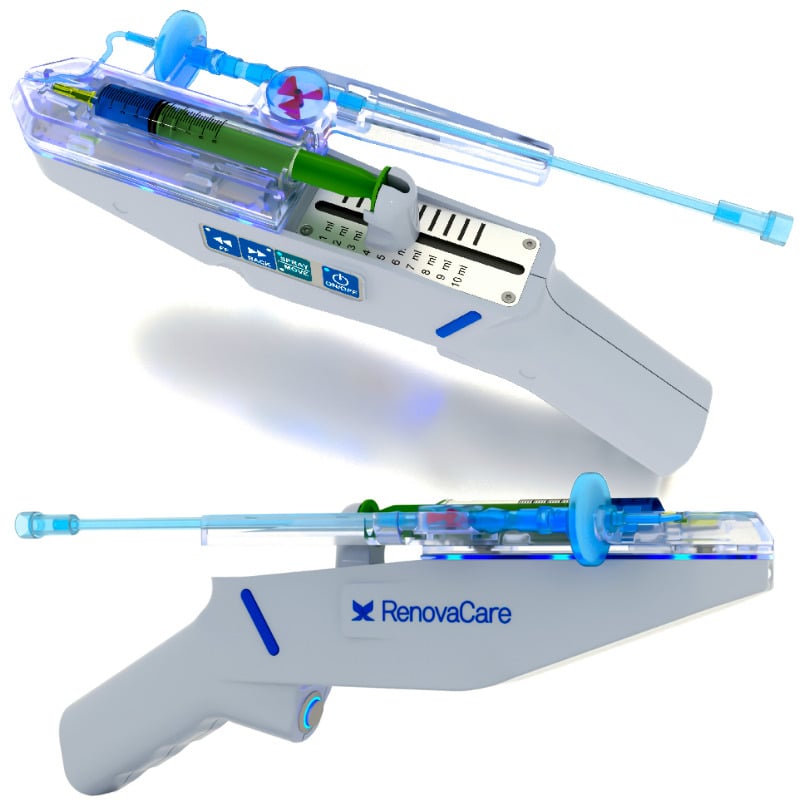 The futuristic design of the aptly named SkinGun makes treating patients easy. To use it, you just load the stem cell solution into a syringe, attach it on top of the stem cell gun, point at the wound, and pull the trigger. As the solution is gently released, a beam of light illuminates the target and makes the fine mist of healing stem cells visible.

“The magic here is that we’re taking the patient’s own, skin-derived stem cells,” explains Bold. These stem cells naturally reside within the skin and are responsible for replacing the estimated 500 million skin cells our bodies shed everyday.

After being isolated from the patient and sprayed evenly on the skin, these stem cells form “thousands of little regenerative islands throughout the wound.” This way, the whole surface of the wound heals simultaneously, instead of doing it from the edges to the middle, which is the natural — and slower — mechanism. “The longer it takes, the higher risk for inflammation and scarring. The bigger the wound, the higher the risk.”

The technology has already been tested in experimental settings on dozens of patients, with impressive results. Matt Uram, a patient suffering from second-degree burns on 30% of his body, was treated using the SkinGun and released only four days later. He had fully regrown the epithelial layer and didn’t need any more dressings or special care.

“If that same patient had undergone mesh grafting, he would have faced weeks of treatment, and probably months of post-surgery care,” explains Bold. Indeed, current skin graft procedures for large areas of skin require a lengthy process of harvesting healthy skin, expanding it and stitching it back to the wound — which also leaves life-long scars and markings after healing.

The stem cell gun can reduce that time to a total of 90 minutes from the moment a skin sample is taken from the patient to when their stem cells are shot onto the wound. And, with a sample of skin as small as a post stamp, this method can produce enough skin to treat large burns and wounds. While current skin grafts can achieve a ratio of 1:6 between the donor area and the wound area after expansion, the Berlin team can raise it to 1:100, no expansion required.

With the design ready to go, Bold is now getting ready to test the SkinGun in clinical trials. This means a ton of paperwork and tests to evaluate everything from biocompatibility to checking what happens when you drop the device on the floor. The final goal is to make the technology available as a routine practice for doctors to treat burn victims.

This endeavor is now on the hands of US company RenovaCare, which back in 2013 bought the technology and its IP and appointed Thomas Bold as CEO of the company. Yet, all the engineering work continues in the Berlin lab, in which the American firm still collaborates with Stem Cell Systems, the German company that first inspired the idea of the stem cell gun with its liver bioreactors.

These bioreactors are also the reason why the lab is located in such an unusual building, originally built in the 20s and now home to an emergency shelter for thousands of refugees. Back in the 90s, when the airport was still active, the team required fast routes to receive and send fresh samples to their network of collaborators.

“The first time we thought it was so cool to just walk out of the lab and enter the plane with the samples in briefcases,” recalls Bold. “But then we were told we had to go out the other way and pass the controls like everybody else,” he laughs. Those times are long gone, and Thomas Bold is now less concerned with airport regulations and focused instead on translating all these years of research into bringing forth a technology that can change lives with just a small skin sample and a “gun.”