In 2020, fundraising seems like an even bigger challenge than before. The biotech industry, however, is seeing a record high in capital raised to finance new therapeutic developments.

A recent white paper entitled “Biotech’s resilient response to 2020” summarizes the findings of a detailed analysis conducted from January through August – showing that funding levels across the globe are at a record high.

Within this period, they have already surpassed the totals of previous years, exceeding $87B (€73B).

Investors worldwide have acknowledged the biotech industry’s potential to meet the healthcare challenges highlighted by the Covid-19 pandemic, and increased their biotech and pharma activities.

“The society is recognizing the value of medical science and innovation. Healthcare is now regarded as a rather defensive stock,” Michael Ward, author of the white paper, told me.

Ward is the Global Head of Thought Leadership at Decision Resources Group (DRG), part of Clarivate, a company supporting commercialization efforts in biotech through high-value data, analytics, and insights into the healthcare industry.

New indications and the rise of telemedicine 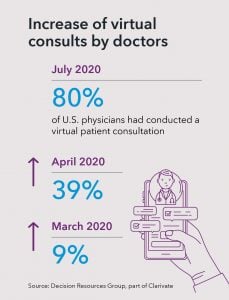 While about one-third of the invested money goes to oncology and cell therapy applications, the area of infectious diseases has increased to more than 10% of venture and private financing, from 3.9% in 2018. About a quarter of new grants are funding work on therapeutics and vaccines targeting SARS-CoV-2, the virus responsible for Covid-19.

In response to the pandemic, US health insurances have started reimbursement programs for telemedicine services, kick-starting investments in digital health businesses.

“One of the surveys we carried out this year showed that the fraction of US physicians who had conducted virtual patient consultations increased from 9% in March to 80% in July. And given the positive feedback we get from both physicians and patients, we believe that telemedicine is here to stay,” Ward explained.

Where in the biotech industry does the money go?

From a global perspective, the US is still the biggest player, soaking up two-thirds of biotech venture funding. Within the country, money continues to gravitate to the centers of excellence, with almost 60% going to California and Massachusetts.

An exception to the rule is Sana Biotechnology Inc. in Washington State. The cell and gene engineering firm raised $700M (€591M) in June – the largest ever private financing by a US biotech.

This record was broken only by the German company CureVac. The biotech firm developing mRNA-based vaccines, including one against SARS-CoV-2, raised $725M (€612M) this year as a private company before successfully concluding an initial public offering (IPO) on NASDAQ in August.

In the Asia-Pacific region, the Chinese biotech sector is still in the lead. Despite the pandemic-related setback, Mainland China saw a substantial increase in venture capital and IPOs of more than $2.5B (€2.1B) by the end of August.

Since the Hong Kong stock exchange (HKEX) overhauled its listing rules to welcome pre-revenue biotech companies in 2018, investments are now split between NASDAQ and HKEX. The latter has evolved into the second most interesting market for public financing of biotech companies globally. 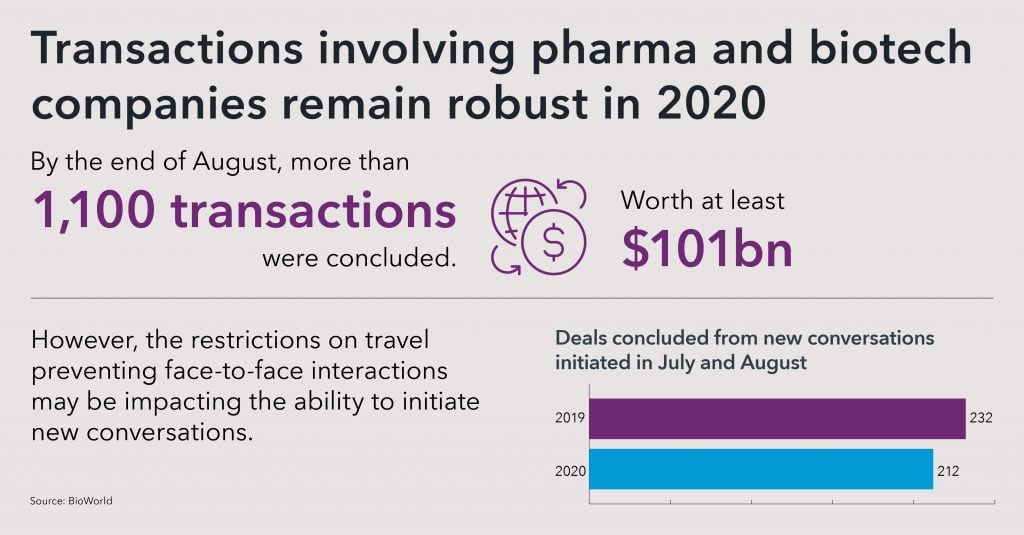 Still, it is difficult to tell how the situation will develop over the next months. “We need to consider that many personal meetings laying the groundwork for current collaborations and investments had already taken place before the pandemic,” Ward said. “For example, the largest pharma company transaction completed in 2020, AbbVie’s $63B (€5.1B) acquisition of Allergan, was in train months before SARS-CoV-2 was even identified.”

Pitching and due diligence processes take time, and seven out of eleven pharma/biotech mergers and acquisitions above $1B (€843M) were closed in the first quarter of 2020. Accordingly, companies with existing relationships seeking series B and later financing rounds have encountered fewer difficulties than startups in need of seed or series A funding.

And while there is no drop in the number of patents or scientific papers – for work already completed – travel restrictions are impacting ongoing projects. At least 427 clinical trials were stopped or postponed within the first eight months of 2020.

“On the other hand, we see that the biotech industry has shown an extraordinary degree of flexibility. Companies that historically would have been competitors are working together to resolve the current issues. Some of these behaviors may become permanent, allowing us to address not only health crises but also unmet medical needs in the future,” Ward concluded.