A presentation on the financial state of biotech kicked off BIO-Europe in Cologne this week. The hostile American political climate has done some damage.

There’s a political storm brewing across the Atlantic that has everyone in biotech worried: what does the American political climate mean for the future of the industry? The numbers already look worrying.

David Thomas, the director of Industry, Research and Analysis at the Biotechnology Innovation Organization, presented a preliminary financial report on biotech’s performance in 2016. This year has been the worst for biotech in a decade, including 2008 which was marred by the financial crisis; but this year, there was no macroeconomic cause, but rather a generally politically hostile environment. 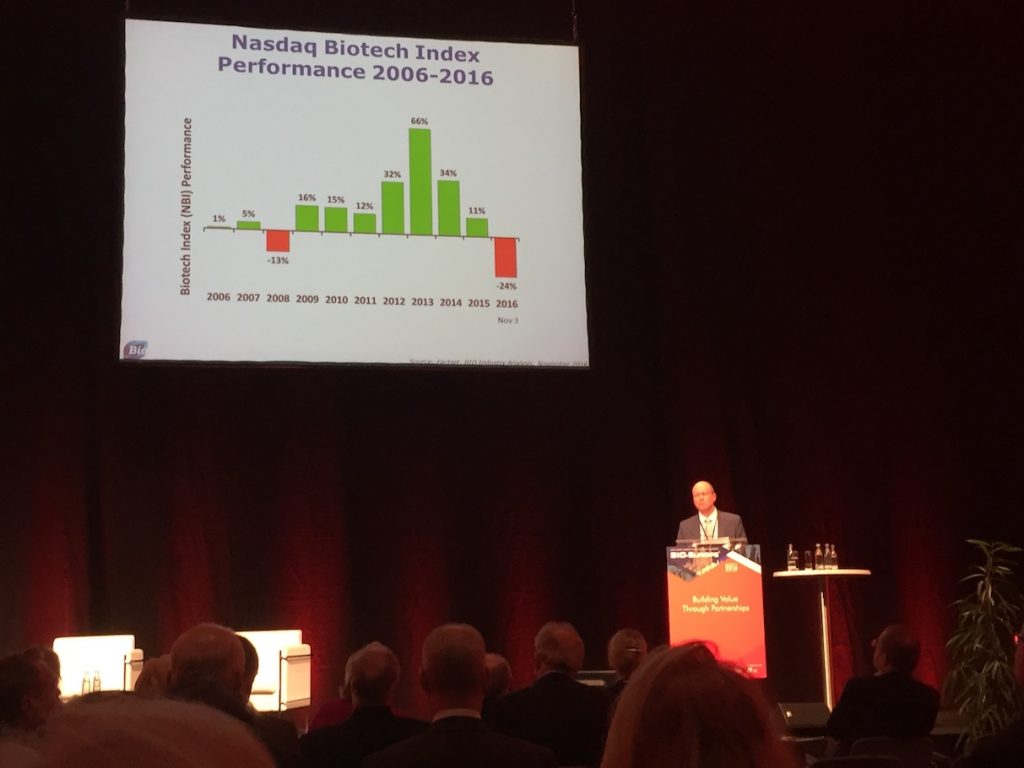 Thomas showed that this year’s economic effect on biotech was industry-specific, indicating the poor performance was a direct result of policy. Overall, those that suffered the most from this poor performance were smaller, emerging biotechs instead of big pharma.

For obvious reasons, American companies suffered most from policies in the country, but the war on prices has led to fallout in Europe as well. The US dipped 39% and dragged Europe down along with it by 27%.

This decline reflects that fundraising has generally suffered this year. CRISPR Therapeutics finally went for an IPO but came up with half the revenue of its competitors, Intellia and Editas. But some companies, like ADC Therapeutics, have held their own in Series fundraising roudns.

While there have been fewer IPO’s this year and valuations are down, Thomas said there has been “a respectable amount of activity” regarding dealmaking. Pfizer’s jaw-dropping acquisition of Medivation seems to be carrying the field, but there have been some smaller but still impressive deals: Ganymed was recently acquired by Astellas for a German record of €1.3B, for instance. However, as Merger Markets reported, the sector has been suffering since Brexit.

However, out-licensing has dropped dramatically in almost all areas, but especially neurology, endocrine disease and oncology. Notable exceptions are in ophthalmology and metabolic diseases, as well as “other,” which covers Genmab’s deal with Gilead for access its DuoBody platform as part of its efforts towards an HIV cure.

These decreases are mostly accounted for a drop in clinical-stage upfront payments, as their preclinical counterparts are holding steady. In fact, 2016 may yet be a record year for preclinical deals. A large part of it may be credited to Allergan, which has been on a deal shopping spree.

Of the biggest deals this year, 11 out of 12 were in the preclinical stage. Moreover, 7 of 12 belonged to immuno-oncology, suggesting the field isn’t in as much trouble as the overall decrease above suggests. One such examplar was a recent deal between Medigene and bluebird bio for its TCR platform, followed by another deal between the upstart Crescendo and Takeda.

While the numbers came as a bad review of the biotech industry, the winds are changing with the result of the American election yesterday. Since it was announced that Donald Trump will be the next President of the United States, biotech stocks have climbed back up. Thomas also noted that we may yet see a spike in acquisitions if last year was any indication. However, there probably isn’t enough time for the industry to recover and score a positive end-of-year report, but 2017 looks like a more favorable year already.