The diversity debate in biotech has always been there. In the month of Pride and after LifeSci’s party scandal at JPMorgan 2016, I was wondering what’s the real situation about diversity in biotech? And what could be the solutions?

Haven’t you heard about the LifeSci’s party scandal? In short: the editor of BioCentury Karen Bernstein and Kate Bingham from SV Life Sciences, supported by most of the American biotech leaders, published an open letter to call for an end of any event that present women as “chattel”. The party was one of the largest and most famous of JPMorgan (over 1000 people).

The letter was republished by all major American biotech media and reached most of the biotech community. I have heard of this story at literally every biotech event I’ve been to since JPMorgan. LifeSci’s reputation was obviously seriously damaged, and it apologized publicly.

This story seriously raised the debate on diversity in the biotech field. This is far more valuable, as the problem is more spread than you might think.

As Bloomberg reported, women occupy only 20 of the 112 top management position at the 10 most valuable pharma and biotech companies worldwide. This is very similar in the top 10 biotechs startups that raised the most money in 2014: only 19 percent of senior executives were women.

I had a closer look in Europe and looked at executive committees and board of the 10 billion-euro biotechs. The results are even worse than those from Bloomberg. The average women as executives make up only 18% and on the boards only 13%. The most diverse biotech company in Europe is Morphosys whereas Actelion is the least diverse one (not by far). 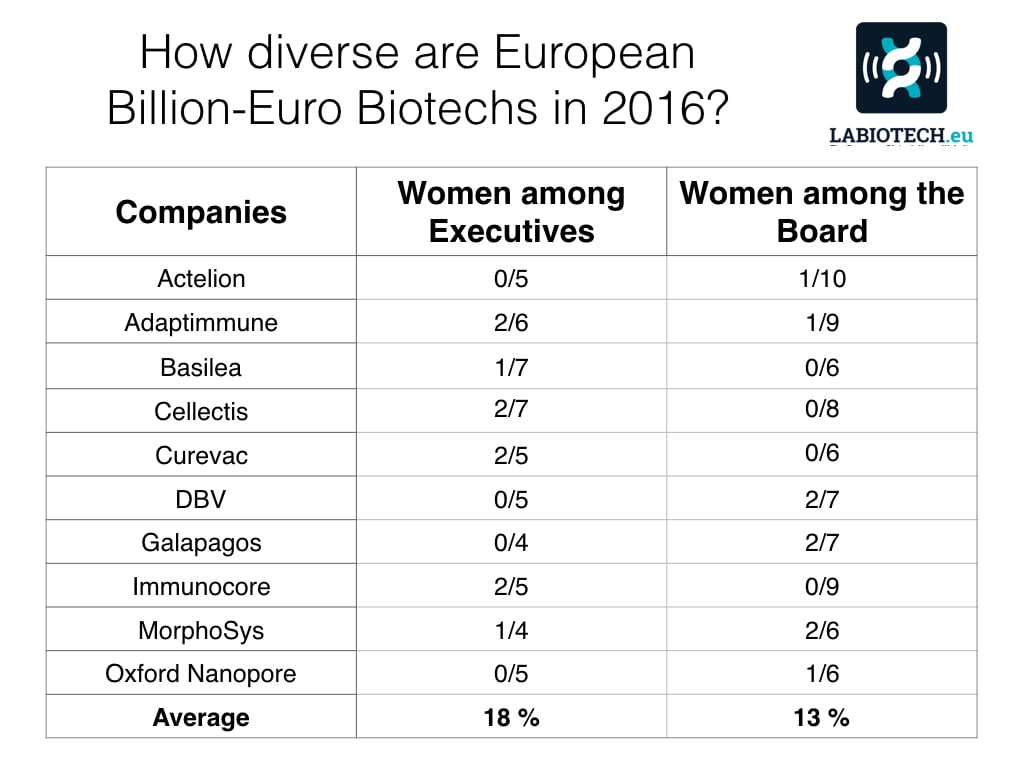 Moreover, it’s not just numbers. Miriam Boer, the chief technology officer at Baltimore-based Sonify Biosciences, gave Forbes an example of how it’s harder to raise money as a woman.

“I’ve had investors’ first words to me upon walking into a room be about my body, others have leered at my chest, and still others have refused to deal with me because of my gender and didn’t mind saying as much.”

At our first conference Refresh, we had about 20% women among our speakers. Our first criteria was to look for top executives all across Europe, and we had trouble finding women (as the figure shows above). Nonetheless, we are conscious that we have to improve on that and will put more effort to get the balance closer to parity for our next edition (btw, we’re looking for speakers right now for our next event. If you have any nice suggestions, please reach out!).

Inside Labiotech, it’s different. We actually have over 50% women and people from 6 nationalities (from all across Europe). We didn’t really planned it, as we are looking for skills first. We simply hired the best people we could find, and it turned out to be diverse. This is a great plus on a daily basis.

How can we solve such a complex situation?

One of the solutions might reside in the talent pool available.

It worked for Labiotech, but it’s not the same for Illumina. The CEO Jay Flatley told Bloomberg that his company is struggling to find women. “The frustrating part is that we have had a reasonable amount of senior roles that open up in our company, and the number of women that become candidates is very small.”

The reality is also that women are often hired for lower position compared to men at the same qualifications or for lower salaries.

Regulations might help. In France, the actual government decided to be at 50% equality among the ministers. It seems to work well so far. Could this be applied to executive committees or board of directors in biotech companies? Maybe. Biotech companies should see an incentive in showing a better diversity. Having a better balance is positive for the image of a company, which helps to attract better talents.

Is the situation going in the right direction? Yes, for sure!

Of course, the problem of diversity is far from being solved, but the trend seems to be going in the right direction.

The Internet industry and Apple, in particular, are showing the right path. Its CEO Tim Cook is the first Fortune 500 CEO to have made his coming-out public. The company is marching at the San Francisco Gay Pride and published reports on how it is working hard on improving diversity. In Research, L’Oréal and the UNESCO have created the Women in Science Award, which promotes and encourages the participation of women in scientific research.

And in European biotech, you have some examples of highly successful biotech women as well. Take for example Isabelle de Cremoux from Seventure, Emmanuelle Charpentier, inventor of CRISPR/Cas9 or Eva-Lotta from Immunocore

I’m curious to see how the situation will evolve in the coming years. Debating is great, but acting is much better. I will be following the topic in the coming months with a special focus on Europe, and I hope strongly that the improvements will be significant.

What do you think? Please let me know in the comments or by email