Biotechnology is a broad domain, which includes numerous areas such as healing, feeding and fueling the world. Historically-speaking, the biotech sector started in the 80s with the discovery of gene cloning. The first “Biotech” ever born was Genentech (contraction of Gene and Technology), founded in South San Francisco, which successfully produced human insulin in bacteria.

The Organisation for Economic Co-operation and Development (OECD) defines biotechnology as “the application of science and technology to living organisms, as well as parts, products and models thereof, to alter living or non-living materials for the production of knowledge, goods and services.”

This means it is possible to genetically modify and exploit living organisms (micro-organisms, animals, plants) in order to produce biological molecules. This refers to what we commonly call GMOs (Genetically Modified Organisms).

The biotech industry is a fast-moving domain thanks to the evolution of techniques in some disciplines, such as in biology, IT, physics and chemistry, as well as in robotics. In fact, new sciences – generally known as “-omics” sciences – have blossomed since the beginning of this fast developing industry. These new disciplines (proteomics, transcriptomics, metabolomics, metagenomics…) are cross-disciplinary and attempt to bring new answers to the new issues public health, remediation, biodiversity exploitation… etc face today.

Due to its several application domains, the biotech sector is classified by color:

Nowadays, the colors are crossing one another and some of them, “green” or “blue”, are developing therapeutic products essentially!

Who are the medical biotech pioneers?

Genentech founded in 1976 in San Francisco (California) develops therapeutic recombinant proteins and became a subsidiary of Roche in 2009.

Genzyme founded in 1981 in Cambridge (Massachussetts), develops innovative therapies against rare genetic diseases and multiple sclerosis, and became a subsidiary of SANOFI in 2011 for €20Bn.

founded in 1980 in Thousand-Oaks in California is focused on the development of innovative drugs to fight cancers, renal diseases, rheumatoid polyarthritis, bone diseases and other severe illnesses.

Actelion founded in 1997 in Switzerland is a biopharmaceutical company near Basel in Allschwil which is specialized in orphan diseases. Actelion, leading independent european biotech, is focused on innovative drugs for diseases with significant unmet medical needs.

What is the situation of the global market?

Thirty years later, the total revenue of the Biotech sector amounts to nearly €100Bn. It is divided in 3 markets with the US counting €63Bn, whereas Japan ranks second whilst Europe records €30Bn. However, there is no real link between the number of companies and the turnover. Indeed, Europe which has a little more companies than the US, only amounts to half of the US’ turnover. Regarding other markets, China, Singapore, India and Brazil, invest a lot to catch up. 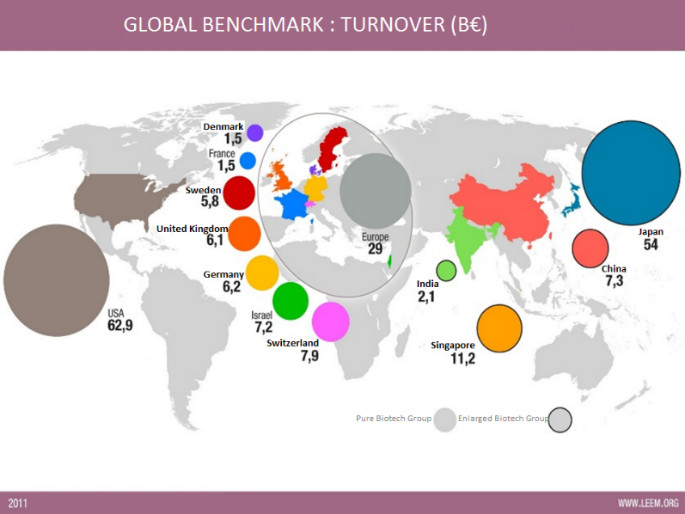 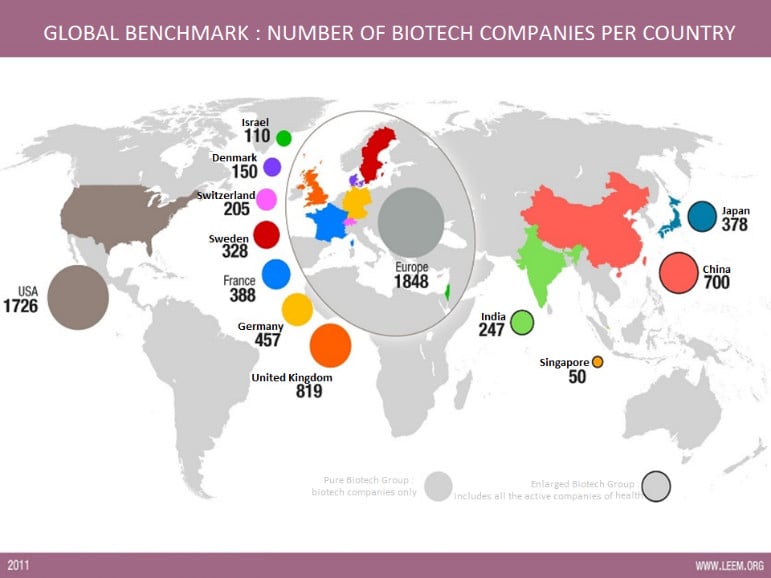 What do we need to keep in mind?

Nowadays, thanks to mergers and acquisitions, biotech companies and bio-pharmaceutical companies build strong partnerships with pharma industry. This is not only for a financial and industrial guarantee to help the biotech companies develop their lead, it is also a way for pharmas to fill their product pipeline (all the products they have in development). Although the health area is the most important sector for the biotech industry regarding its global economy, the new “blue” and “green” biotechnologies arouse a lot of interest. Indeed, these new bio-industries could bring therapeutic, cosmetic and agro-food solutions, because these resources are still not well exploited and our knowledge still remains limited. Keep in mind, that we only know between 5 to 10% of the biodiversity on the planet.

Regarding this context, there is also an impact on financing, business models, intellectual property and regulatory affairs. The biotech industry, considered as a growth industry, brings new drugs, services and knowledge. This knowledge brings new skills, innovative methods and techniques that consequently transform professions. The new links between hard sciences and management, allows the biotech field to foresee interesting perspectives in the near future for the new generation of students and young graduates still to come.