Paris-based Onxeo has proved in humans the potential of a cancer treatment that interferes with DNA repair mechanisms. The therapy has potential to work in a wide range of tumors without cancer cells becoming resistant.

Onxeo has reported preliminary results from an ongoing Phase I trial in which six different doses will be tested. All three doses tested so far have proved safe, and the second dose proved enough for the treatment to reach tumoral cells and activate its target.

The treatment, called AsiDNA, consists of a short strand of DNA linked to a cholesterol molecule. It induces the hyperactivation of the molecular mechanisms that cells use to repair DNA, so that the proteins involved are not available to repair DNA damage in the tumoral cell. Healthy cells, however, are not affected.

“Healthy cells are able to put themselves in sleeping mode, so they stop dividing when AsiDNA gets in the cell,” CEO Judith Greciet told me. “AsiDNA is metabolized very quickly, so they wait for it to be kicked out of the cell and start the replication again, whereas the tumoral cells have not the ability to stop dividing, so their DNA is damaged.”

Onxeo plans to start a Phase Ib/II trial testing the treatment in combination with either chemotherapy or DNA damaging agents, such as PARP inhibitors. 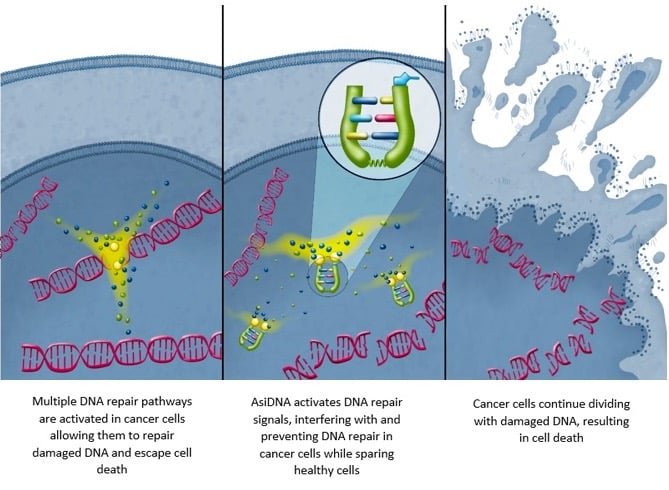 Cancer treatments targeting DNA repair mechanisms are relatively new. AstraZeneca’s Lynparza (olaparib) was the first to receive approval in 2015, becoming a treatment for people with ovarian and breast cancer that do not respond to chemotherapy.

“PARP inhibitors like olaparib are very interesting in terms of efficacy, but resistance appears,” said Greciet. “AsiDNA targets a mechanism that exists naturally and is needed for tumoral cells to survive, which means they cannot develop any resistance.”

The field has been gaining momentum in recent years, which Greciet sees as a sign of how attractive it is, confident about the potential of the company’s unique mechanism of action.

“All [other] compounds target only one pathway. We are very different because we are acting upstream, targeting all the pathways of the repairing machinery,” she said.

Because of this, the treatment is not limited by a specific mutation or molecule being present in tumoral cells. The treatment has therefore potential to treat multiple types of tumors.

The tumor types that will be targeted in upcoming trials will largely depend on the specific drug that is chosen for the combination, as the plan is to target a form of cancer for which the combination drug is already approved.