Hopes for an Alzheimer’s cure took a hit with Eli Lilly’s recent failure, but it’s not over yet. Probiodrug explains the failure and response.

Alzheimer’s Disease devastates families and represents one of the largest financial burdens in society. Now the sixth leading cause of death for all age groups, the neurodegenerative disease cost the US an estimated $236Bn in 2016, and a new patient is diagnosed approximately every three seconds. How is biopharma progressing towards a cure for Alzheimer’s Disease?

By some measures, not well. Despite some recent encouraging results from companies like Biogen, Eli Lilly crushed hopes with late-stage failure of its star Alzheimer’s therapy, solanezumab. However, some experts like James Peyer, a managing partner at Apollo Ventures, a VC funding biotechs tackling aging, take the flop in stride.

“Eli Lilly’s results were certainly a blow to biopharma’s efforts to cure Alzheimer’s,” he says, “but this last generation of drugs was aimed at clearing amyloid beta (A-beta) plaques as the neurons were already dying. At that point, the snowball has already rolled down the hill.”

The CFO of the German Alzheimer’s biotech, Probiodrug, Hendrik Liebers, agrees and attributes Eli Lilly’s failure to a flawed approach. “Solanezumab was based on the old understanding of Alzheimer’s developed in the 1990’s, when therapeutic efforts focused on clearing plaques. Clearing plaques once they’ve formed doesn’t really solve the problem. You have to attack the source of the plaques to stem the flow.”

A-beta plaques impair neuron function until they reach a critical mass and kill the cell. Echoing Liebers’ strategy, Peyer argues that “it would be most effective to stop plaques from accumulating in the first place. Lilly’s failure seems to support the point that starting earlier to prevent the disease is really the way to go.”

The Tipping Point: How Early do you Start?

“We should start as early as possible,” says Liebers. “But there is such a thing as too early. The problem is, how do you run a clinical trial for a preventative medicine? In order to show a disease is treated or cured, there has to be a disease to start with.”

Liebers elaborates, “Conceptually, it’s possible; but in reality, it’s very challenging. The best way is instead to treat patients in the early stages of the disease; once you have your product, you can move into preventative trials.” Liebers doesn’t see the main problem as one with profit-minded drug companies or insurers; rather, “it’s a matter of verifying treatment effects,” he says.

So what treatment effects need to demonstrated for a therapy to go forward? “It depends on the state. Brain health is a continuum,” says Liebers. “There is a point of no return, but no one knows where it is with the plaques.”

It’s already clear that patients with less advanced cases of Alzheimer’s respond best to treatment in the clinic. Plaques cause lasting damage, so it isn’t possible to rescue function entirely. Once plaques are cleared from their cells, the neurons might remain alive and recalibrate. However, in late-stage patients with lots of plaque buildup, dead neurons stay dead and cannot regenerate.

Most therapies target A-beta plaques as the characteristic pathology of Alzheimer’s Disease, but as Liebers explains, the proteins comprising them are not the cause of the disease.

“It’s not A-beta driving Alzheimer’s Disease — A-beta is an essential part of brain function,” says Liebers. “A minority of them become aberrant as enzymatic modifications make them prone to aggregation. It’s these aggregates that are toxic and drive the neuron death we see in Alzheimer’s.”

“The Phase III failure wasn’t a blowout, rather simply a missed efficacy endpoint,” he continues. “The therapy was observed to be moderately effective, but not effective enough to make a product out of it, which was actually consistent with previous results.” The terminal failure was really an extension of a middling performance.

The consequent late-stage failure was a setback for Lilly, but not for the A-beta hypothesis, says Liebers. “We now understand that if you can catch the aggregates while they are still soluble, you can treat the disease” as Probiodrug aims to do, describes Liebers.

“We’ve learned that it’s much more worthwhile to target toxic amyloids that form these aggregates instead of all amyloids. This selectivity is the hallmark of the current second generation of Alzheimer’s therapies, and now we’re starting to see success.”

Probiodrug is focused on PGlu as an amyloid with “no function: it’s essentially a side-product from an enzyme that performs cyclizations of other large molecules.” In the side reaction, the normal, soluble A-Beta is transformed into PGlu, which is hydrophobic and resistant to degradation. According to Liebers, “it has been shown that this derivative drives neuron death.”

Probiodrug is developing a small-molecule inhibitor of this enzyme as a pill to slow this process and prevent the formation of PGlu. Liebers attributes the drug’s favorable safety profile to its highly specific target such that it “doesn’t interfere with natural, normal processes that produce normal and necessary amyloid, just the unnatural process making it toxic and aberrant.” 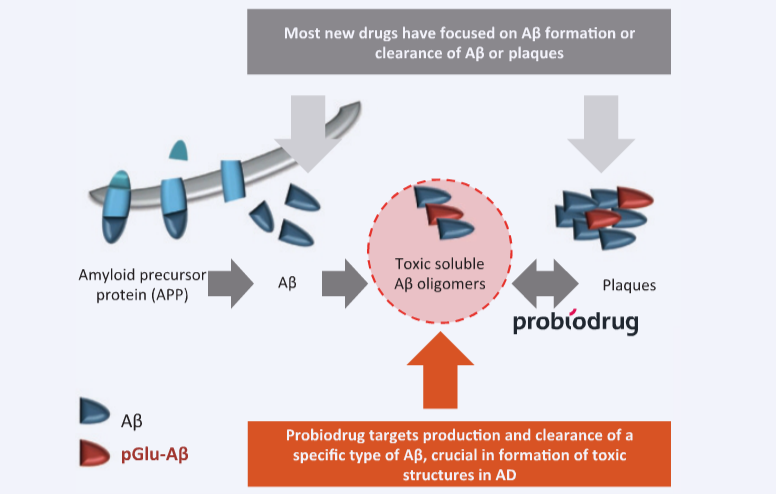 If Lilly’s luck has run dry, Biogen may pick up the baton. Its antibody candidate, aducanumab, is in Phase III trials and was just reported to have decreased A-beta plaques and slowed cognitive decline in over 100 patients in Phase Ib trials for an increased dose.

This came as good news for investors, but also those invested in the A-beta plaque hypothesis. Some saw Lilly’s failure as a reason to doubt its validity and therefore all if not most of biopharma’s work on Alzheimer’s to date, but Biogen’s success has breathed life back into the approach. Moreover, aducanumab is reportedly more potent than solanezumab, so it may succeed where Lilly’s candidate failed in efficacy.

Genentech is also developing a competitive antibody for Alzheimer’s, crenezumab, which it acquired from the Swiss biotech, AC Immune; it’s already turning out some positive results.

Despite the recent colossal failure of Eli Lilly’s Alzheimer’s treatment, hopes for a treatment remain high as pipelines in biopharma are going strong and returning encouraging results. Whether it’s Probiodrug, Biogen, Genentech, Eli Lilly or some yet unknown player that first takes an Alzheimer’s drug to market, there are many potential therapies on the horizon.

A treatment for this disease would also open the door to a new prevention-oriented paradigm. It is still an abstract concept, but it could crystallize via a cure for Alzheimer’s Disease. “As with most innovation, we have to progress in a stepwise manner,” says Liebers. “Once an Alzheimer’s treatment is in hand, it’s just a question of time for a preventative medicine to hit the market.”

Preventative medicine is the key to unlocking anti-aging treatments since the best way to fight the aging process is to slow or prevent the body’s decline. Peyer believes “Alzheimer’s Disease will be one of the first dams to break” in the effort to develop treatments to combat aging. Thus, a successful treatment for Alzheimer’s would not only improve or save lives but also herald the dawn of anti-aging treatments.