From implanting a third ear on his arm to connecting his senses to the internet, Stelarc is an artist known for extreme performances that take the human body to the limit and blur the lines between technology and ourselves.

On the inside of his left arm, Stelarc is in the process of ‘growing’ a third ear — a left one to be more precise.

The artist, born Stelios Arcadiou in the island of Cyprus, grew up in Australia. At age 26, he had his name legally changed to Stelarc.

Ear on Arm is Stelarc’s longest performance, which so far has involved two surgeries. It took him 10 years to find surgeons that agreed to his surreal proposal. The first surgery, in 2006, consisted of implanting a skin expander to create excess skin that could accommodate the ear.

“There were several serious problems that occurred: a necrosis during the skin expansion process necessitated excising it and rotating the position of the ear around the arm,” the artist states on his website. 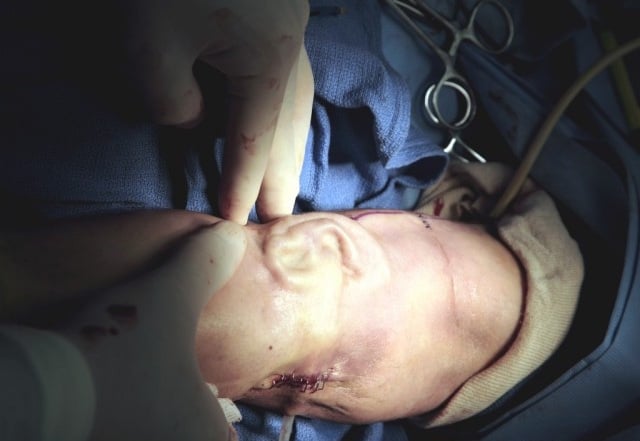 The second surgery introduced a biocompatible implant designed to induce the growth of cells, and a miniature microphone was positioned inside the ear. However, it had to be removed due to an infection.

Stelarc is planning a final surgery that will transform the ear-in-progress into a functional organ. “The earlobe will be partly grown using my own adult stem cells. Such a procedure is not legal in the USA, so it will be done in Europe.”

“It’s still somewhat experimental with no guarantee that the stem cells will grow evenly and smoothly, but it does provide the opportunity of sculpturally growing more parts of the ear — and possibly resulting in a cauliflower ear!”

The final procedure will re-implant the microphone, which will be wirelessly connected to the Internet. The goal is to use it to listen in to what’s happening in other places of the world. 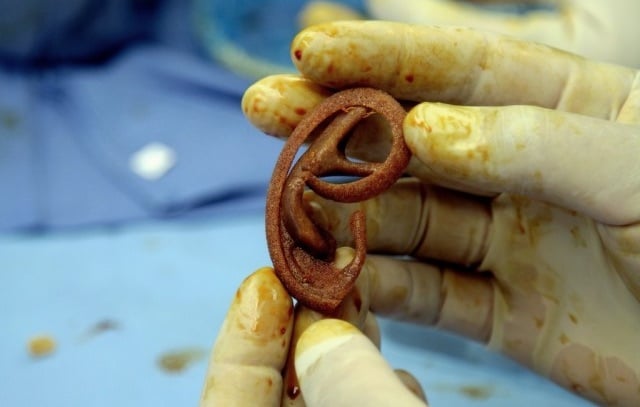 “The ear is not for me. I’ve got two good ears to hear with,” the artist says. “For example, someone in Venice could listen to what my ear is hearing in Melbourne.”

If successful, Stelarc will have his third ear directly connected to the Internet — meaning his body can technically be hacked. But he seems rather excited about the possibility than scared of it.

This concept of connecting the body to the rest of the world is present in many of Stelarc’s other artworks. “People are becoming portals of internet experience,” Stelarc told Digital Trends. “In my Re-wired/Re-mixed performance I effectively outsourced my senses to people in other places. It was a gesture towards future bodies, where you would be able to incorporate vision, hearing, and haptic experiences of people in other places. Your body is not this locally operating, locally perceiving body, but rather a body that’s distributed and can form beyond the boundaries of its skin, beyond the local space that it inhabits.”

In another project called Ping Body, he attached electrodes to his muscles, which were then activated in response to the ping response times of 40 locations in the world.

“Today I might decide to see with the eyes of someone in London, hear with the ears of someone in Montreal, whilst my left arm is remotely prompted by someone in Tokyo to perform a task here in San Francisco. So imagine a sensory experience that is not bound by one particular location, or bound by the skin or senses of this particular body.”

The artist continues to explore the limits of the human body and the separation between technology and our concept of self, which is becoming thinner with the advent of devices that are integrated in the human body — such as tattoos that monitor your health, electronic pills, or smart contact lenses connected to the internet.

Our bodies are increasingly interconnected. And although that brings forth multiple ethical concerns that will need to be addressed, Stelarc sees it as the next step in evolution to adapt to our times.

“The biological body is not well ‘organ-ized’. The body needs to be internet-enabled in more intimate ways. The Ear on Arm project suggests an alternate anatomical architecture — the engineering of a new organ for the body: an available, accessible and mobile organ for other bodies in other places, enabling people to locate and listen in to another body elsewhere.”