Targovax has recruited its first patient in a Phase Ib trial for its new cancer vaccine TG02 targeting mutations of the RAS gene.

Mutations of the RAS gene disrupt normal cell division and are a key driver of cancer progression and treatment resistance. The Norwegian biotech Targovax is developing peptide-based anti-cancer vaccines targeting these mutations found in more than 85% of pancreatic cancer, 50% of colorectal cancer and 20-30% of all cancers. Now, the company has initiated an exploratory Phase Ib trial with its second RAS-specific vaccine candidate, TG02, in patients with locally recurrent RAS-mutated rectal cancer scheduled to have surgery.

Targovax’s TG02 cancer vaccine contains a mixture of eight synthetic peptides representing fragments of the most frequent RAS mutations seen in rectal cancer. By combining the peptides with the potent adjuvant GM-CSF, the vaccine can switch on the patients’ T cells to fight off the cancer cells carrying these RAS mutations.

TG02 is Targovax’s second vaccine candidate to enter the clinic. Its lead candidate TG01 has recently completed a Phase I/II trial in resected pancreatic cancer and showed off with encouraging two-year survival data. 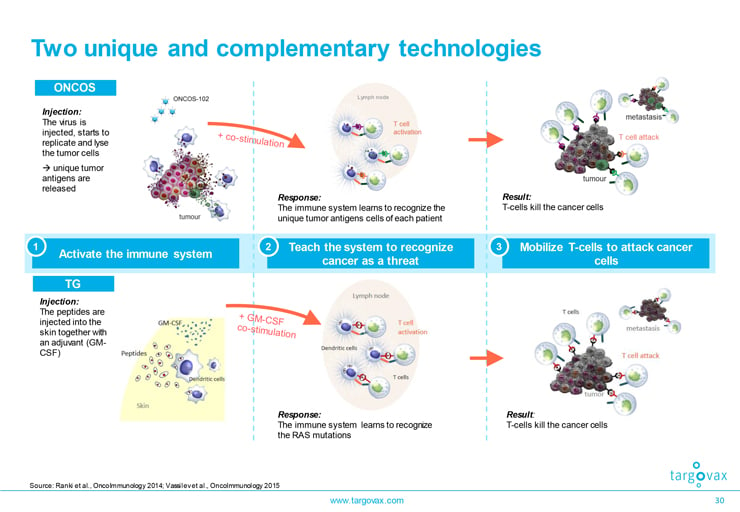 These results bring up new hopes, especially after one of the most promising pancreatic cancer vaccine candidates, GVAX, developed by US-based Aduro Biotech, flopped in Phase II last year.  Considering the lack of new treatment possibilities for pancreatic cancer and the high incidence of RAS mutations in these patients, Targovax seems to have found itself a good niche.

Targovax also has some backups in its pipeline, should its vaccine candidates fail. In 2015 the company merged with the Finish biotech Oncos, which added the oncolytic adenovirus ONCOS-102 to Targovax’s portfolio. ONCOS-102 is a virus-based immunotherapy, which specifically infects and kills tumor cells and produces the cytokine GM-CSF, thereby also stimulating the immune system to fight off the cancer. The candidate has completed Phase I studies and is currently getting ready for Phase I/II.

Since the immuno-oncology space has long been focusing on blood cancers, it is exciting to see that young and innovative biotechs, such as Targovax are now going for the more difficult to reach solid tumor entities. Others include Swedish Immunicum, which is currently testing an immunotherapy that could target virtually any solid tumor, and TILT Biotherapeutics, based in Finland, which is also using oncolytic viruses to target different solid tumors in combination with checkpoint inhibitors or T cell therapies.