Plastic is the staple material of modern life, and a sustainable future will need bioplastics. What is biotech doing to make this happen?

“What do you include in bioplastics? Because bioplastics is a very large word,” commented Emmanuel Maille, formerly Director of Strategy and Development at French chemical company Carbios, which focuses on developing biobased and biodegradable plastics. It’s a large word indeed. Bioplastics can be ‘bio’ in different ways: they can be biodegradable, they can be made of biological materials (like corn or lactic acid), or they can be produced through fermentation. We asked Maille, and other experts, to help us break it down.

Despite all the exciting research and breakthroughs in the field, the market for bioplastics remains small. The worldwide production of plastic now exceeds 300 million tons. However, this figure is rapidly increasing and estimates predict it could more than double by 2030 if nothing is done to prevent this.

Meanwhile, the production capacity for bio-based plastics was estimated to be around 2.1 million tons in 2018 — less than 1% of the total market. Just under half of this amount is plastic is also biodegradable. These figures are still low, but he production of bioplastics is going up steadily and current predictions suggest it will hit 2.6 million tons by 2023. 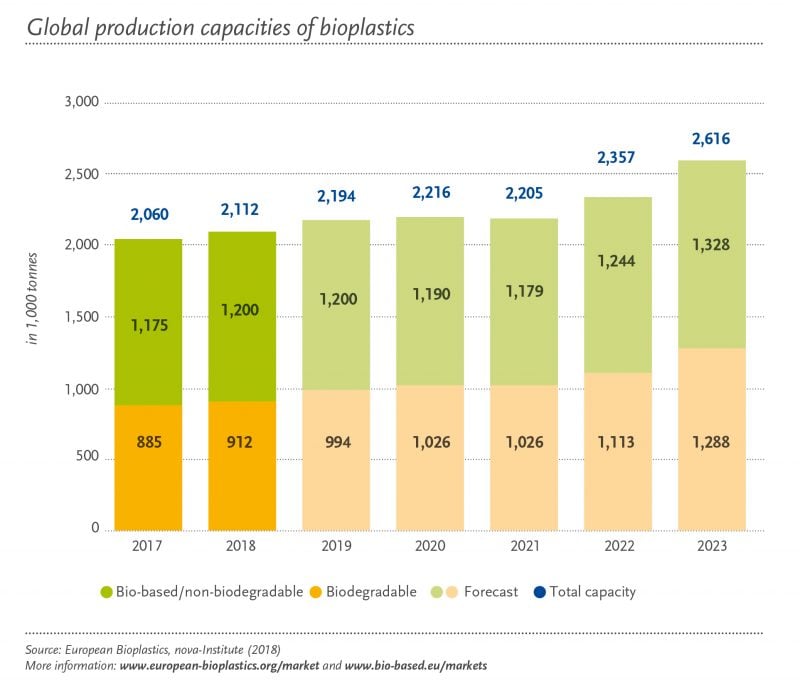 A key driver in the field is governmental policy, specifically regulations and incentives. The sticking point moving the field forward in Europe appears to be strict French regulation, including a ban on oxo-biodegradable plastics, whose ‘micro plastic’ fragments persist in nature. In 2017, over 150 organisations from around the world backed a call to ban the use of this type of packaging, due to concerns about the danger it poses to the environment.

In contrast, various governments and the European Union support research and initiatives in bioplastics. For example, the EU’s main funding scheme, Horizon 2020, supported Synpol — a project to synthesize biopolymers from fermentation of gas from complex feedstocks — which published its final papers last year. Bioplastic-focused companies have also received frequent funding from government institutions keen to promote the use of more environmentally friendly plastics.

How to tackle the biodegradability problem

Plastics are a tough waste problem, as many types can persist in the environment for centuries. Some plastics, however, can be degraded by microorganisms. One example is BASF’s biodegradable polymers, which include Ecoflex, a petrochemical-based polyester.

However, switching entirely to biodegradable plastics is a big challenge. Plastic is used in many different applications, which have different requirements regarding physical and chemical properties. A biodegradable alternative may not be easily available for all of them.

Biotech is hard at work on this degradation problem. Possible solutions range from developing plastics that can degrade in the ocean, finding microbes with exotic enzymes capable of degrading a type of plastic (through bio-mining, for example) as part of waste treatment, programming microbes to degrade plastics using synbio techniques, or developing the relevant enzymes for degradation through protein engineering.

For example, Carbios developed an ‘infinite recycling’ process where enzymes break down polymers into smaller components that can then be reused to make plastic again. Unlike the traditional method of recycling, where plastics are shredded, melted and processed again, enzymatic recycling still produces high-quality plastic. This strategy was successful with PET, a type of plastic that is everywhere (for example, in most plastic bottles) and is hard to recycle. Last spring, the company also developed a method for breaking down PET plastic fibers in textile waste using enzymes.

“In the future, we expect to have enzymes for each type of polymer. So we could have an iterative process to recycle any type of plastic, without the need for sorting, and we can recover the monomers that interest us,” said Emmanuel Maille, previously Director of Strategy and Development at Carbios.

These enzymes can also be incorporated in certain plastics, such as a biodegradable plastic bag, to allow them to break down within a specific amount of time or use. Carbios develops this technology for single-use plastics that have a defined lifetime, such as packaging or agriculture films.

Taking petroleum out of the equation

Bioplastics is also a common term for plastics that are made out of biomass — be it corn starch, vegetable oils or fats, or chemicals produced by microbes. The main goal is to be able to produce this much-needed material without relying on petroleum. To be more accurate, they should be called biobased polymers according to the IUPAC, the royalty of chemical-related terminology.

The star of biobased polymers is probably PLA, which has the potential to replace the ubiquitous PET plastics in many applications. PLA is obtained from lactic acid, a chemical that can be produced by fermentation. Netherlands-based Corbion Purac is producing PLA and other biobased alternatives; other European players include Synbra in the Netherlands and Futerro in France.

A promising company in the field is Netherlands-based Avantium, a Shell spin-off developing PEF plastic from corn-derived sugars to replace PET in bottles. Unlike PLA, PEF can be told apart from PET during the sorting process for recycling. The biomaterial was successful enough to strike a deal to make Coca-Cola bottles and Avantium also has a deal with Danone in place to make yoghurt cups. Indeed, a lot of attention has been put into developing PEF in the last few years and it is set to enter the commercial market on a larger scale in 2023. As well as being fully biobased, it has better barrier and thermal properties than PET.

Can bioplastics be sustainable?

For biobased plastics to be a realistic contender to those made using petrochemical resources, there’s the challenge of price. Of all the tons of plastic produced annually, a large part are for industrial, disposable or mass-produced applications. This means the plastics market navigates the cutthroat economics of commodities, where price is king.

One solution is to take the knowledge of bioplastics to value-added applications, such as medicine. For example, German chemicals company Evonik has developed a whole range of biodegradable polymers for use in medical devices and for sustained drug release implants. There are also other niche applications where bio-based plastics are being used, such as packaging for cosmetics. L’Oréal, for example, has 100% bio-sourced bottles.

However, some biobased plastics may not be a sustainable solution. Competition with food resources is a problem. Access to raw materials can also be tricky for the bioplastics industry. For instance, there are sugar access quotas that can change over time and make the production suddenly unfeasible. In fact, these quotas have been tightening up, even in places like China. “Access to sugars is a major challenge for the industry of bio-based plastics” noted Maille. 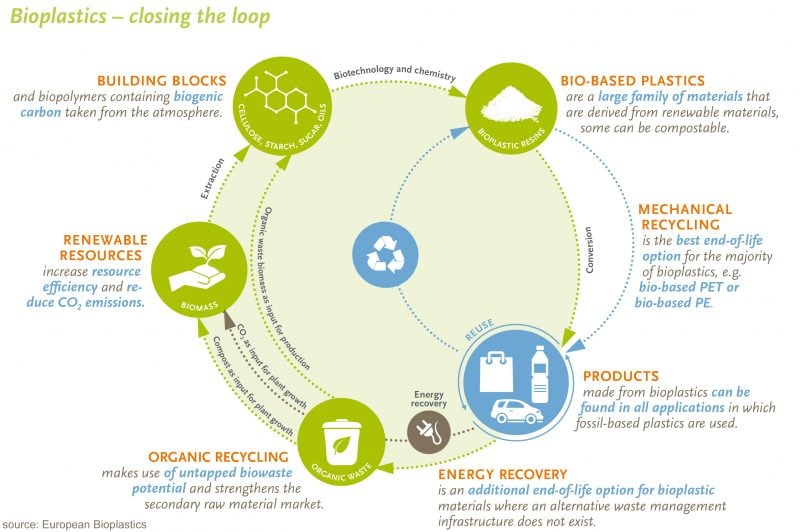 Some argue that this is not a major problem. Data from the European Bioplastics organization published last year reports that 0.8 million hectares of land were used to grow the crops needed to produce bioplastics, which is less than 0.02% of the amount of land used for growing crops worldwide.

“Land use for bioplastics continuous to be insignificant” Francois de Bie, Chairman of European Bioplastics, stated on the organizations website. “97% of all arable land is used for pasture, feed and food.”

But biotech also has solutions for excessive land use, such as the biorefinery concept. The idea is to develop microbial strains that can ‘eat’ green waste (like wood residues), which is cheap and widely available. From the waste, the biorefinery would produce key chemicals that are later used for a wide range of applications — including plastics.

Corbion and BASF formed a joint venture in 2013, Succinity, to realize this idea. The goals of the partnership are to produce high-quality succinic acid, a component of bioplastics, from renewable sources.

Another example is Italian Novamont with a project to produce chemicals used in the plastic industry, such as PVC plasticizers. Novamont has gone from strength to strength and launched a new bioplastics plant to boost its production capacity last year. Global Bioenergies is a big biofuels company based in France. In addition to developing fuels, they are also pursuing biobased isobutene to make plastics.

We have covered how cells can be used to create the building blocks of plastic and bypass the need for oil. But synthetic biology can go even further, and create a cell factory of plastic.

Some microbes naturally produce polymers that we can use as plastics. PHAs, for example, are produced by a number of microorganisms and can be used in food packaging and other disposable items like diapers.

Through strain and fermentation optimization, some companies have managed to produce PHAs from bacteria at an industrial scale. In 2015, Italian biomaterials company Bio-on and French sugar cooperative Cristal Union announced plans to build a PHA plant in France, although no recent announcements have been made about this development. In a similar partnership, Bio-on announced an agreement with Spanish firm Acor in December last year to begin producing PHA bioplastics from sugar beets.

There are other highly-versatile polymers but there are no known natural metabolic pathways. Metabolic and protein engineering can help. Carbios announced in 2016 that it had managed to create a metabolic pathway for the production of PLA in collaboration with its academic partner, INRA Toulouse. For Carbios, creating a metabolic pathway for PLA made it a more cost-effective material so the company could compete directly with petrochemical plastics.

Will the future be bioplastic?

Bioplastics still have a hard time competing head-on with petrochemical plastics. The future of bioplastics is mainly driven by regulations and the principle of environmental concern rather than a ‘real’ market need. Although it’s far from ideal to be largely dependent on political goodwill, the requirements for biodegradable and biobased plastics are getting more and more stringent, which will drive not only the growth of bioplastics but the technology behind it. 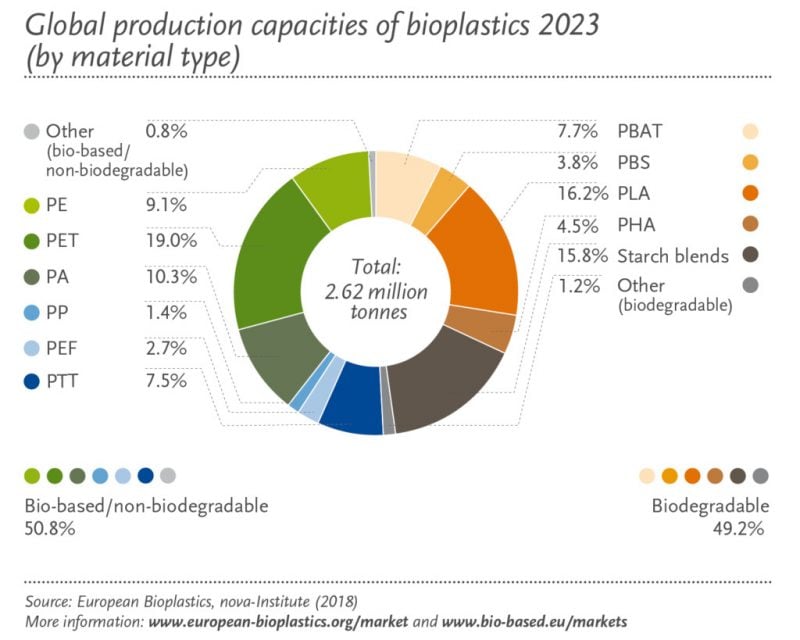 There are a lot of different ways for bioplastics to grow, and a lot of work has to be done. The announcement that the EU will aim to cut the use of single-use plastics significantly in the next few years is welcome, although a lack of recognition of the potential role of bioplastics is disappointing. The recent bad publicity around oxo-biodegradable plastics and the microplastic particles they produce has also been damaging for the field.

However, there is hope for the future. Israeli scientists recently discovered a way to make bioplastics that doesn’t require land or fresh water; and Swiss scientists showed last year that polybutylene adipate terephthalate, or PBAT, used as an alternative to PE in farming, can be eaten by soil microbes without producing plastic microparticles.

This feature was written by Denise Neves Gameiro and originally published on 6.9.16. It has since been updated by the Labiotech editorial team to reflect the latest developments in the field.