Biosensors are rapidly becoming part of our everyday life. As technology advances, we may soon be able to monitor many aspects of our health at home, in real time, and without needles.

Traditionally used in medical practice to monitor patient status, biosensors have recently started to be broadly marketed for wellness and fitness applications. These devices are able to detect a specific molecule that is linked to a health condition, offering an actionable insight into what’s happening in our bodies.

The market for biosensors is growing rapidly. It is predicted to reach a massive €27B by 2020, pushed by a wave of new technologies that are making them more accessible both for patients and consumers.

Currently, point-of-care applications constitute the main use of biosensors. In this area we see companies such as Luciole Medical in Switzerland, which is developing a minimally invasive probe to measure blood oxygen levels in the brain for intensive care.

However, the fastest-growing segment of the biosensor market is home monitoring kits, such as glucose monitors used by diabetics. Medtech companies are working to develop smaller, cheaper, and easier to use biosensor devices that anyone could use at home.

Self-monitoring with biosensors has the potential to impact the care of virtually any chronic disease, by shifting from a monthly appointment at the hospital to daily monitoring at home. This can help anticipate symptoms and prevent the progression of the disease.

Home monitoring could also make a big impact in ensuring people comply with the treatments prescribed by their doctor. Studies have consistently shown that approximately 50% of people do not take medications for chronic diseases as prescribed, which can cause severe complications and even death in the long term. 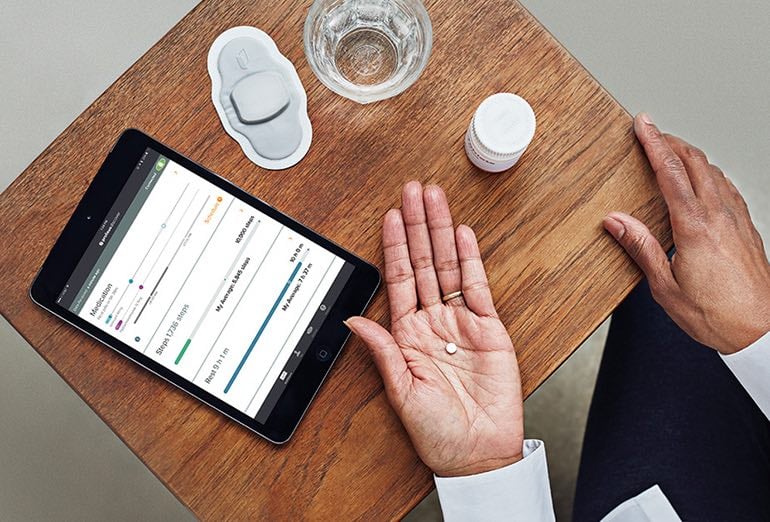 This is often the case with HIV medication, where compliance is impacted by side effects and the stigma around AIDS. Gilead is currently running a clinical trial using a digital pill that can detect whether the HIV medication it contains has been ingested, informing the patient through their smartphone. The digital pill is activated by the acid in the stomach, triggering a radiofrequency emitter that sends the information to a cloud server.

A similar concept is being used to monitor mental illness treatments. A digital pill developed by Otsuka Pharmaceutical to monitor the ingestion of aripiprazole, used in schizophrenia, bipolar disorder, and depression, was approved by the FDA in 2017.

Biosensors could also help monitor cancer treatments, which often show a narrow therapeutic range where slightly lower doses make the therapy fail and overdosage causes severe adverse effects. Lucentix, a spin-off of the École Polytechnique Fédérale de Lausanne, is developing a low-cost biosensor that could measure the concentration of a drug in a drop of blood or saliva. The technology is based on a molecule that produces fluorescence in the presence of the target drug. According to the company, it can be adapted to sense a multitude of different drugs that are commonly monitored in patients, including anti-cancer agents.

“A lot of the ways we diagnose disease are based on single-moment-in-time markers, but the promise of wearable sensors is real-time health monitoring, You can see a more complex picture of what’s going on in the body. That alone will lead to more diagnostic techniques across a spectrum of diseases,” said Andrew Jajack, researcher at Eccrine Systems, a US company that develops sweat biosensors.

The company is also developing a continuous glucose monitor. Diabetes is an area where real-time measures can significantly help patiens prevent or delay the appearance of complications such as neuropathy or diabetic ulcers. In this field, multiple companies are developing glucose biosensors that no longer rely on needles — one of the main reasons behind poor blood glucose control in diabetics.

In the future, the power of real-time monitoring will be enhanced by simultaneously measuring multiple health indicators. The French company Chronolife, in partnership with Servier, is developing a smart T-shirt with multiple sensors that can measure six physiological parameters and communicate with a phone app to monitor the status of people suffering from chronic diseases. Biofourmis, a startup based in Switzerland, is currently developing a wearable monitoring platform that can measure up to 22 health parameters at once.

As technology advances, scientists are coming up with clever yet unusual ideas to monitor our health. For example, in 2018, a team from MIT revealed an ingestible sensor containing genetically engineered bacteria that could diagnose gastrointestinal problems such as bleeding.

The scientists engineered a strain of E. coli bacteria to emit light when in contact with blood. This so-called ‘bacteria on a chip’ technology combines living cells with low-power electronics that convert the light into a wireless signal that can be read by a smartphone. 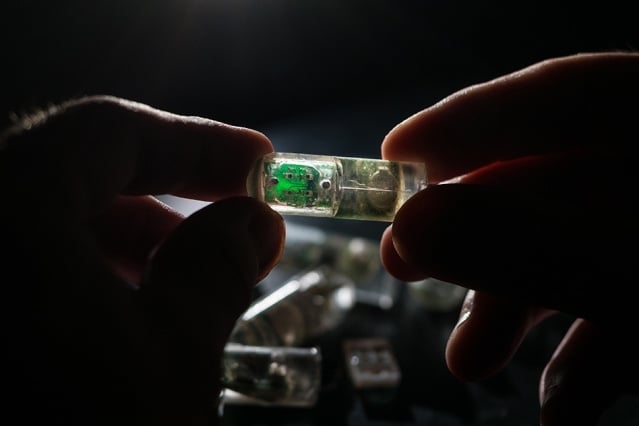 Tattoo biosensors are another promising emerging area. Researchers at Harvard and MIT have developed color-changing tattoos that respond to the concentration of glucose or sodium in the fluid found between skin cells. Thus, the color of the tattoo reveals if the wearer is suffering from high blood sugar or dehydration, respectively.

Another example is from a collaboration between US and Chinese scientists, who are developing a temporary graphene tattoo that lasts a few days and can be used to measure skin temperature and hydration, as well as performing electrocardiograms and electroencephalograms.

The future of biosensors

“Isn’t it ridiculous and terrifying at the same time that we bring our cars to the car service at the moment that it indicates a problem, however, we don’t do that with our own signals?” writes the Medical Futurist.

Nonetheless, there is still a long way to go before biosensors are routinely used to monitor every feature of our health. Furthermore, the technology comes with concerns of data privacy, as many of these biosensors are monitored remotely and connected to the internet, making them potentially hackable.

Some of these innovations have already been marketed for a few years. Although the field is advancing rapidly, so far we have only a few examples of groundbreaking devices. The technology is still in its early stages so it will be several years until it reaches its maximum potential.

Images via Shutterstock, Proteus Health, MIT, and The Medical Futurist. This article was originally published in November 2018 and has since been updated with more recent data.