The gene editing tool CRISPR-Cas9 has revolutionized research in biology. With several parties fighting for the rights to the technology’s intellectual property, how difficult is it for third parties to access this coveted technology?

The CRISPR patent dispute is quite unique. While universities usually work together to disseminate innovation and knowledge, in the CRISPR case they are fighting for a gold mine.

Usually, VCs and tech transfer offices require a clear and strong intellectual property position in a market before making any commitment to invest in a life sciences company. This has not been the case in the CRISPR field. The leading companies in the space, CRISPR Therapeutics, Editas Medicine, and Intellia Therapeutics, have a combined market capitalization of €4.4B ($5B)  and their overall funding exceeds €353M ($400M) despite the ongoing patent conflict for the rights to the gene editing tool.

The business of technology transfer is rarely highly lucrative. On average, US and European universities get, respectively, 3% and 1.1% of their research budget from licensing royalties. In the case of CRISPR, there are clearly too many gold diggers for a single gold mine and it is still not clear how the law case will impact all of them at a worldwide level.

Existing patents related to CRISPR are broad, covering a variety of different types of gene edit in all sorts of target genes, but none of them give an exclusive right to its owner to exploit and commercialize the technology.

“Gene-editing technology is like an onion: the layers can be peeled back one by one,” says Christi Guerrini, Baylor College of Medicine.

Clearing a way through the CRISPR patent jungle is a difficult task. More than 1,700 patents have been filed by hundreds of different institutions, companies, and researchers. Around 100 new patent families on CRISPR are published each month.

Most patent filers did not wait for a court ruling on the CRISPR case to move forward. They wasted no time capitalizing on the huge market for this game-changing technology by licensing it to other businesses. Geography has also played a role in making the situation more complex. For example, in the well known UC Berkeley versus the Broad Institute patent case, courts in the US favored the Broad Institute whereas European courts did not.

The right to use CRISPR has been divided into three main fields of use. The first is for noncommercial research. The second for the development of tool kits, reagents, and equipment related to CRISPR-based gene editing. The third is for the development, sale, and use of therapeutics using CRISPR.

The main CRISPR patent owners have granted exclusive rights to ‘surrogate’ companies. This gave exclusive control of the patents to private spin-offs that can seek investment to develop applications of CRISPR. In this highly competitive field, it is more efficient to grant rights in bulk to a single company and let them negotiate individual licenses with third parties.

The Broad Institute, Harvard, and MIT have called this an ‘inclusive innovation’ model. They licensed their patents to Editas Medicine, which has a right to exclusively use CRISPR technology on targets of its choosing for the development of genomic medicines. Other companies may apply to license some of its intellectual property to target genes of interest not being pursued by Editas.

For example, Editas has signed a deal with Juno Therapeutics worth up to $737M to develop three new treatments that combine Editas’ gene editing technology with Juno’s approach to fighting cancer using CAR-T cells. Editas also granted a license to Allergan for $90M limited to applications in eye disease. Editas also issued a bunch of non-exclusive licenses for R&D applications and tool development that include a flat fee and royalties on the revenue. 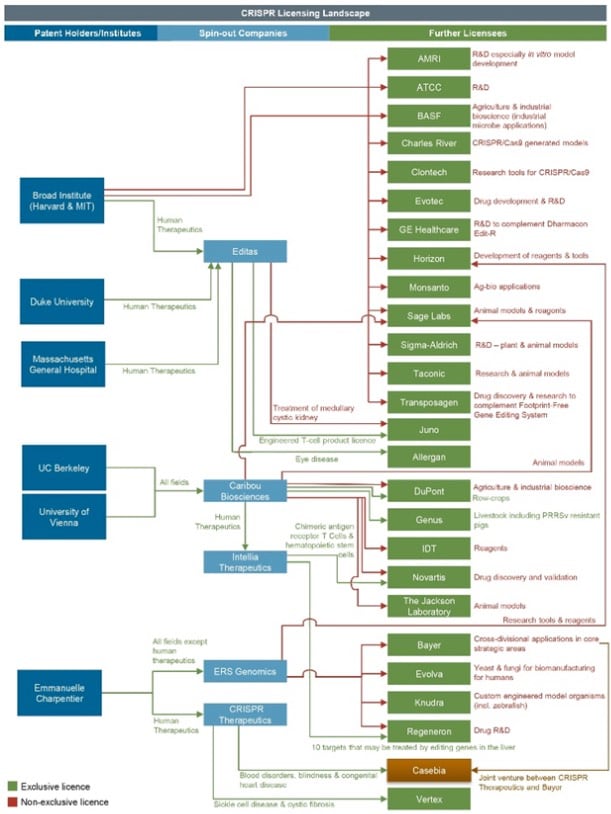 In turn, Charpentier’s patents have been licensed to CRISPR Therapeutics for medical use and to ERS Genomics for all other applications. CRISPR Therapeutics has given Vertex Pharmaceuticals exclusive rights to up to six new treatments. The company has also created a joint venture with Bayer in a €275M deal.

As more and more patents are granted, individual patent claims will become narrower and might have less value, which would make them harder to enforce. In this context, it is difficult to evaluate the weight of each patent for each technology and application. This situation may prompt some to rely on trade secrets to protect their assets rather than on patent protection.