Many people outside of biotech may wonder how the size of the biotech industry compares to the digital industry, and even biotech experts often don’t know the answer. Here we’ll take a look at how the two industries compare and how they are expected to develop in the future.

We cannot get around the fact that the digital industry has changed our lives by giving us access to more information than we ever had before. Every day, we go online with our phones, computers, and tablets to watch videos, listen to podcasts, or read up on any possible topic imaginable. Big tech companies such as Uber and SpaceX have also attracted a lot of media attention for their fundraising rounds that have reached hundreds of millions of dollars.

The biotech industry has an equally, if not more important, influence on our lives by driving innovation forward in how we treat diseases, grow food in agriculture or deal with industrial waste. But how do the two industries compare to each other in terms of the funds they are raising, which industry is getting more VC support, and how each is industry expected to grow?

Looking at the Big Picture

“What I think is the biggest difference on the digital side is that initially investments are very small and vary by spread. So you very often see drops of either €100,000, or something even less..then very often there’s a big jump to huge investment amounts that go well into the hundreds of millions,” Regina Hodits, Managing Partner at Wellington Partners Life Sciences Venture Capital firm in Munich, told us.

“That’s different to what we see in biotech…it is hard to do anything without a couple of million invested because once you actually do your initial experiments then you have to do some wet work in the lab, or testing in animals, then you will definitely be in the several million range. And if you want to develop a drug to first use in humans then you’re already up in the 10 to 20 million range. So, the early investments on the biotech side are higher on an amount invested at the company level, but then later on that actually equals out.”

A 2017 CB Insights report shows, returns on investments have been consistently higher for VC-backed healthcare in the US, compared to the tech or digital industry, from 2010 to 2016. 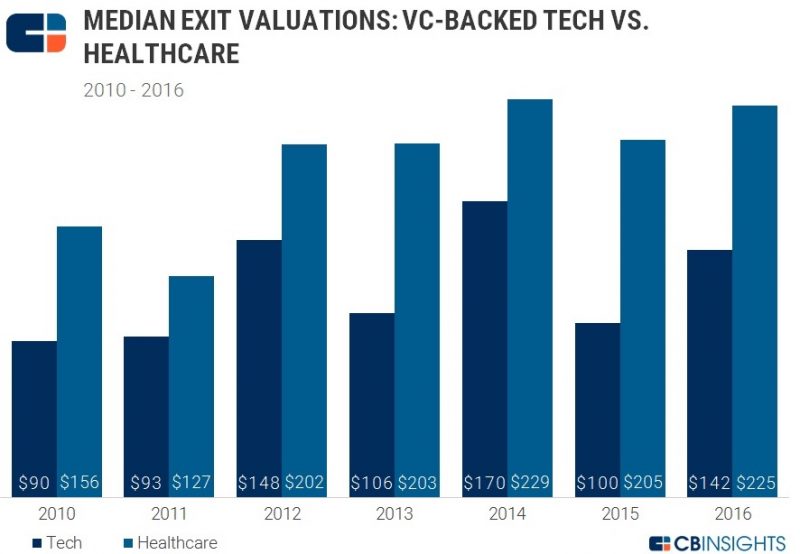 This is particularly impressive when you consider the different natures of each industry.

“Why is that? As opposed to having coders and programmers building a digital platform that costs on a per head basis or for infrastructure, biotech involves significant amounts of experimental work with wet lab facilities, leading to animal trials, and eventually human trials of medical products,” Roth elaborated.

This may be because healthcare companies are often acquired earlier on after reaching certain milestones, such as positive clinical trial results. In contrast, tech companies often become too big for an acquisition and continue to raise money from private sources before going public.

Hodits thinks things are changing for biotech companies in this regard with a number of respectably high recent IPO valuations both on the Euronext and Nasdaq. But she acknowledges that in terms of biotech, the product distribution chain is in the hands of a few big players and this can often lead to acquisitions of smaller companies.

“Big companies want to have access to new products because they need to feed their distribution machines, and companies that have done the development need to hand over the product to somebody that owns this machinery, and that’s a logical point of cost that can always lead to acquisition.”

What About VC Funding?

Looking at the total value of venture capital investment in the US for 2017, investment in digital (Software and IT Hardware) accounted for the most VC support taking up approximately 40% of total investment, with Pharma and Biotech investment accounting for about 15%.

A similar trend was seen in Europe. According to the Invest Europe statistics the total amount of VC investment in Europe in 2017 was €6.4B. Of that, biotech and healthcare VC investment was €1.5B and ICT (Communications, computer and electronics) was €2.9B.

“Now, with contributions from the IT sector and Big Data management, you start to be able to efficiently locate opportunities and de-risk biotech products by using data management optimization of variables across the biotech sector,” Roth explains. “You can start to do simulations on a larger scale that earlier would have absolutely required experimental work.”

Hodits believes getting good returns can depend more on how you manage the investment and the skills and abilities of the fund managers. “Sometimes we have professors from universities that come up with a great idea. If you throw at them $50–100M straight from the start, you have to make sure that you have a management team that can run fast enough to deliver you the return on that money in a certain time frame.” 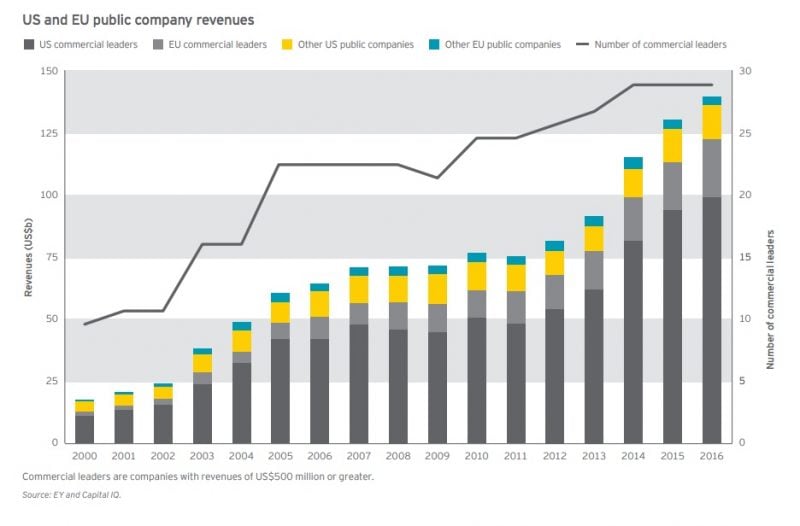 “I believe that now we are going through another revival, because there are new areas of medicine that are making enormous strides against cancer and against other intractable diseases,” said Roth.

“With the combination of new genetic information and contributions of big data management, you can now analyze genomes, biomarkers for disease, as well as genetic problems and alterations. All of this has created the possibility of analyses on a molecular level that were not possible without all the contributions from the IT sector.”

Hodits noted that while investment was slow between 2000 and 2014, since then overall investment has definitely been on the rise in both sectors. She added that Europe tends to lag about 2 years behind the US in terms of investment trends, often due to caution among investors.

“That may also be because in Europe we don’t have too many serial entrepreneurs… We’re starting to get there, but it doesn’t come naturally, and this makes investors more cautious. If you have a team that has already made money for the investors, they are more willing to provide larger sums of capital earlier, and this is, I think, the biggest difference that between the US and Europe.”

While the digital industry is still larger than the biotech industry, biotech is attracting a lot of capital both in the US and Europe. When done well, it can be a very attractive investment case, although the specifics of the industry mean that fund managers need a degree of expertise in the topic to ensure a good return on investment.