The first RNA interference therapy was approved in 2018, after 20 years in development. What can we expect to see in the RNAi field in the future?

After two decades of scientific effort, multiple devastating clinical trial setbacks, and billions of dollars spent on research and development, RNA interference therapies are finally here. For the past three years, patients in both Europe and the US have been receiving life-saving treatments based on RNAi technology.

It has been a long road to get to this point, and there were times when it seemed RNAi therapies might be consigned to the dustbin of ideas that failed.

As every biology student learns early on, DNA makes RNA and RNA makes protein. This (simplified) rule, coined by the co-discoverer of the DNA double helix, Francis Crick, is known as the ‘central dogma’ of molecular biology.

Disruptions in this process, such as a mutant gene producing a faulty protein, can cause disease. The conventional method of treatment has been to target the faulty protein, and more recently to target the gene itself via gene therapy. It seems obvious that a third approach would be to target and degrade the RNA, the middleman of the process, but this proved easier said than done.

In the late 1990s, early work by American researchers Andrew Fire and Craig Mello revealed that RNA interference molecules were able to bind to a specific RNA sequence and prevent it from being used as a template to produce a protein. Their research opened the door to the real possibility that this newly uncovered mechanism of RNA interference could form the basis of new therapies. Their work earned them the 2006 Nobel Prize in Physiology or Medicine. However, the hard work was only just beginning.

The early development of RNAi treatments was fraught with difficulties. These included problems with serious side effects and patient deaths during a number of clinical trials. Notably, Alnylam Pharmaceuticals’ phase III trial of revusiran, an early candidate to treat the rare neurological disease hereditary transthyretin-mediated amyloidosis, was one of the most problematic trials and had to be halted when 18 patients died.

These challenges resulted in several pharmaceutical giants, including Roche, Pfizer, Abbott, and Merck, backing out of RNAi research and development entirely, even after spending billions of dollars chasing the first generation of blockbuster RNAi drugs.

However, Alnylam and a few other companies persisted. In August 2018, the US FDA granted approval for the first RNAi therapy, Alnylam’s Onpattro (patisiran) for patients with hereditary transthyretin-mediated amyloidosis. The European Commission followed shortly after, granting European marketing approval for Onpattro later the same month.

People with this rare condition produce a faulty version of a protein called transthryretrin, which accumulates in and damages the nervous system. Onpattro blocks the production of transthyretin, thus potentially halting or reversing disease progression. Before the approval, the only treatment option for some patients was a liver transplant.

“While other companies started to exit the field, we continued to believe in the life-changing benefits of RNAi, and that persistence has paid off,” said Barry Greene, who was President of Alnylam until last year.

“The approval of the first RNAi therapeutic was a major scientific milestone, not only for Alnylam, but for the entire field. RNAi represents an entirely new way to treat disease. It has the potential to bring hope to tens of thousands of patients around the world living with genetic and rare diseases that were once thought to be untreatable.”

After its success with Onpattro, Alnylam received approval for a second RNAi therapy, called Givlaari (givosiran) in 2019 from the FDA and in 2020 from the EMA. 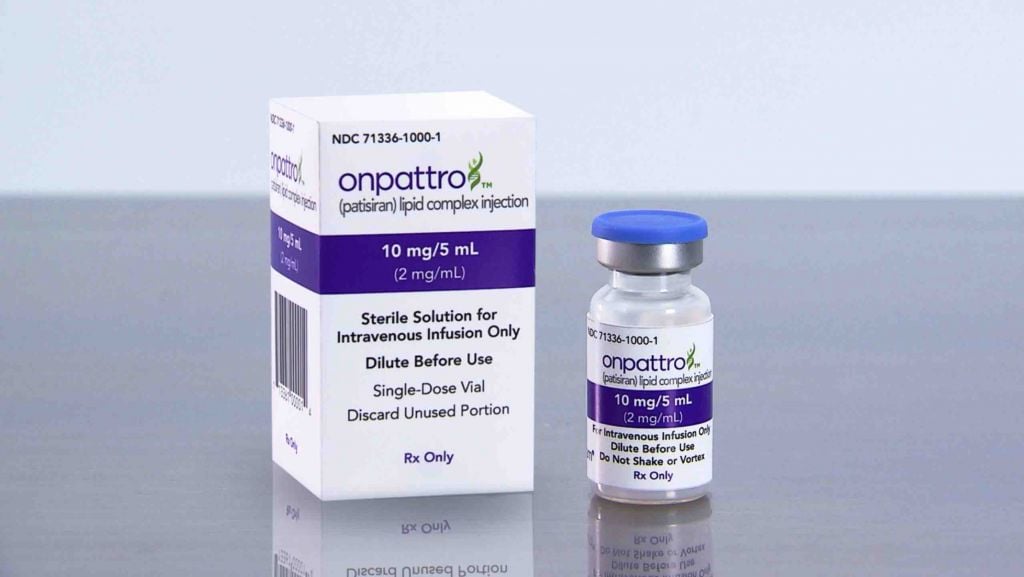 Buoyed by Onpattro’s approval, several European companies are working hard to bring their own RNAi therapies through the developmental pipeline to patients in the near future, one of them is London-based biotech Silence Therapeutics.

“Historically, RNAi medicines had a brilliant childhood in terms of exciting, well-funded companies being started, but as often happens there was a difficult adolescence. Now, with the recent approvals, and with companies like ours maturing, the future post-adolescence looks very bright indeed,” said David Solomon, previous CEO of Silence Therapeutics.

“With the recent approval of Onpattro, much like the rise of antibody medicines in the mid-90s, we’ve seen that RNAi medicines are here to stay. We’ve also experienced an enormous amount of interest since Onpattro was approved, not only from investors, but also from pharma companies wanting to do co-development and licensing deals.”

Silence Therapeutics’ lead RNAi medicine in development aims to treat and reverse iron disorders — notoriously underdiagnosed and undertreated conditions including beta-thalassemia, myelodysplastic syndrome, and hemochromatosis. The company’s technology could reduce iron levels in the blood by targeting a protein called hepcidin, which is a key regulator of iron balance in the body.

Another key player in the European RNAi landscape is Madrid-based Sylentis. The company develops RNAi therapies administered as eye drops to combat eye diseases, which cumulatively affect hundreds of millions of people across the globe. Sylentis currently has a dry eye disease treatment in phase III, and a treatment for macular degeneration in phase I trials.

“So far, the goal of dry eye disease treatments has been to relieve its symptoms. Artificial tears are used to help lubricate the eye and need to be applied several times a day,” explained Ana Isabel Jiménez, COO and R&D Director of Sylentis.

“That is why Sylentis is busy researching for ways to improve treatment and make it much more effective, using the mechanism of RNA interference which makes it possible to control and reduce the levels of abnormal proteins that would naturally improve eye hydration and thus reduce the pain and discomfort of dry eye.”

The post-Onpattro atmosphere of RNAi optimism has spurred on a new global wave of investment and licensing deals, totaling billions of dollars with Alexion, Eli Lilly, and Janssen all announcing deals with companies developing RNAi therapies.

With any luck, RNAi’s ‘difficult adolescence’ truly is over. While there are still some issues to be overcome (such as the high price of first-wave RNAi medicines hampering affordability), the technology looks to be finally living up to its potential as a truly revolutionary and disruptive new class of medicines.

Cover illustration by Elena Resko, image via Alnylam Pharmaceuticals. This article was originally published in Deceber 2018 and has since been updated with recent advances in the RNAi field.