There hasn’t been a new hair loss drug approved in twenty years. But a number of European companies are hot on the case and are getting tantalizingly close to the breakthrough that many patients hope for.

With body dysmorphia magnified by the omnipresent digital world, psychiatrists have increasingly linked the onset of male and female pattern baldness to mental health conditions ranging from anxiety to even depression.

Over the past decade, cosmetic surgery has looked to ease the burden. There is a scarcity of preventative treatments – the only drugs approved by regulators are Minoxidil and Propecia, both of which are only marginally effective at halting hair loss, and the former is the only treatment available to women. The market value of the global hair transplant industry is therefore predicted to exceed €24B ($28B) by 2027.

However, hair transplants are no panacea as they can be costly and sometimes painful. As a consequence, there is a huge market for any new product that can effectively halt pattern baldness in its tracks, and a series of European biotechs view this as an opportunity.

Buoyed by a number of research breakthroughs regarding the science behind hair growth, several biotechs have products in late-stage clinical trials, some of which may go on to become the first novel drug treatments for baldness in 20 years.

“The number of patients waiting for new treatment options is huge,” said Jan Alenfall, Chief Scientific Officer at Follicum, a Swedish biotech working on treatments for hair loss and diabetes.

“Transplantation is an invasive method and as such it is also associated with infections. In addition, many patients tend to require more than one transplant since the process of hair loss generally continues. Recently a lot of high-quality research from several academic groups has generated a lot of interest.”

It was a research breakthrough that inspired Follicum’s development of its hair loss treatment. While studying treatments for arteriosclerosis – a thickening and hardening of the walls of the arteries that often occurs in old age – scientists at Lund University, Sweden, discovered that a variant of the protein osteopontin — a naturally occurring molecule in our bodies — could increase hair growth in mice.

Subsequent studies found that this protein variant has a very specific target on hair follicle cells and can accelerate the hair cycle from resting to growth phases. This allows it to stimulate dormant hair follicles and encourage them to start producing visible hairs again.

However, Follicum’s story reflects the difficulties faced by researchers developing hair loss treatments. In June 2021, the company was forced to discontinue the development of its lead candidate for hair loss after the results of a phase IIa trial showed no significant difference to the placebo group. Follicum is now exploring other avenues for its drug candidate, but this was yet another hit to a condition that requires more attention from drug developers. 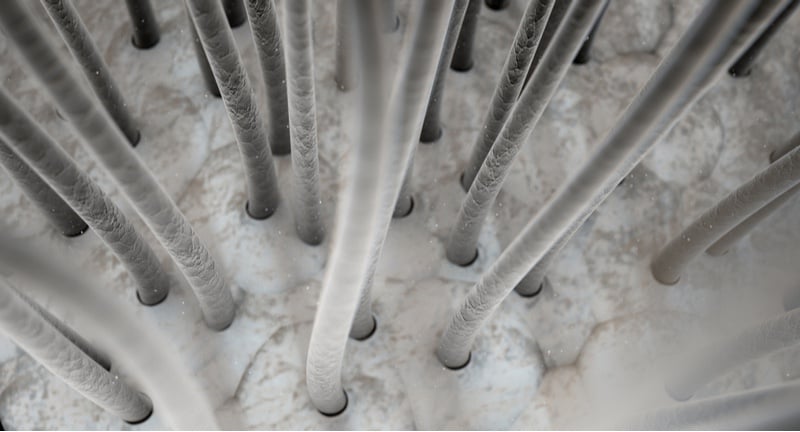 The reason why pattern baldness occurs is that hair follicles become sensitive to hormones on the scalp, most notably dihydrotestosterone (DHT), which binds to follicles and shrinks them until they no longer produce visible hair.

As a result, Italian biotech Cassiopea is developing its own topical product: Breezula. This treatment directly blocks the negative effect of DHT on the scalp based on a mechanism of action discovered through studying the hormone’s role in acne development.

“Our drug actually antagonizes the negative effect of DHT around the follicle, slowing down the hair loss or stopping it,” explained Diana Harbort, CEO of Cassiopea. “And those follicles that aren’t completely shut down due to DHT, they start producing hair again.”

Having already successfully completed phase II trials, and with a phase III trial planned for 2021, Breezula could become the first new treatment for male pattern baldness in the coming years.

A key reason why biotechs are so keen to develop topical products for hair loss is because they are associated with fewer side effects. One of the major limitations of Propecia — an oral medication — is that it is associated with erectile dysfunction due to its effects on hormone levels. In addition, because it acts systemically, it is not safe to be used in female hair loss sufferers, a patient group that has been traditionally neglected by the field. Avoiding hormonal pathways altogether is therefore seen as a promising approach.

While Cassiopea’s product does act on DHT, the topical nature of the therapy means that it does not come with the safety warnings of oral drugs, and studies so far suggest minimal side effects. As a result, the company embarked on a phase II trial of its lead product in female patients and published the first positive results in September 2021.

“There are so few treatment options that actually work for hair loss, and it’s really problematic because of the cycle of social complications that really affect a patient’s self esteem,” said Harbort. “It’s very embarrassing for them, and studies show that women are even more likely to suffer these psychological complications than men, so there’s a huge unmet need.”

In desperation, a number of companies are looking into drugs that are also in development or have been approved for other disorders to see if they work on hair loss patients. For example, the big pharma companies Eily Lilly and Pfizer are currently neck and neck in a race to gain approval for two drugs that have shown promise in phase III trials against alopecia, an autoimmune disease that triggers severe hair loss.

In August 2021, Pfizer’s ritlecitinib showed that it improved scalp hair growth in alopecia patients in a phase IIb/III clinical trial. The big pharma company is planning to file for approval soon and aims to launch the drug by 2025. Ritlecitinib is also being studied for the treatment of vitiligo, rheumatoid arthritis, Crohn’s disease, and ulcerative colitis.

Both Pfizer and Eily Lilly’s drug candidates for alopecia belong to the class of Janus kinase (JAK) inhibitors. These drugs are known to block the activity of cytokines – small inflammatory proteins –  and therefore lower immune responses. JAK inhibitors can be used for the treatment of cancer and autoimmune diseases, such as rheumatoid arthritis.

While these companies are studying different avenues for existing and novel compounds, others aim to try and understand more about the molecular mechanisms that underpin human hair growth and loss. The goal is to find an entirely new class of hair drugs and many companies are investing in early-stage research.

Italian biotech Giuliani, for example, has been exploring one particularly innovative way of reviving dormant hair follicles in hair loss patients. By studying existing drugs for other conditions that cause unwanted body hair growth as a side effect over the past four years, it has identified completely new pathways for stimulating hair follicles.

“We have already found two or three compounds that work on these pathways and are effective at promoting human hair growth in organ culture,” said Ralf Paus, a consultant scientist for Giuliani. “The next step is to see whether they’re safe enough to topically administer them to volunteers, and then a clinical trial. If they really deliver hair growth, this will be a real breakthrough.”

While the current picture for the future of hair loss treatments is perhaps brighter than ever before, Paus believes that there are still some fundamental questions about the science of hair growth that need to be understood. If addressed in the coming years, they could go a long way to solving baldness for good.

“One of the biggest mysteries about hair follicles is that these tiny mini-organs follow an autonomous inbuilt clock that drives it through this cycle of growth, regression, resting,” he said.

“This clock sits in the follicle itself but we don’t know the mechanism that regulates it. If we understood how this organ actually ticks, we could target it pharmacologically. Drugs that can interfere with this inbuilt clock mechanism in the human hair follicle would be very powerful hair drugs.”

Cover illustration by Anastasiia Slynko, picture via Shutterstock. This article was originally published on 19/02/2020 and has been updated to reflect recent advancements in hair loss research.