Here’s what we learned from a lecture by finance guru Roger Stein on a new cancer research funding model at the Charité BIH Entrepreneurship Summit in Berlin.

“I’m not a scientist. I can’t build a drug. I’m never going to have enough money to fund even one of those [clinical] trials. But…all of us together can fund hundreds of trials and get paid well for doing it and save millions of lives,” said Roger Stein, a Senior Lecturer at MIT‘s Sloan School of Management, in a TED talk. Sounds too good to be true, right? As Stein explained at the Charité Entrepreneurship Summit this week, it may not be.

Stein asserted that “charity works when there is a financial incentive,” and that this principle can be applied to cancer funding. To illustrate, he used the example of a DARPA network challenge: the research agency of the US Department of Defense hid ten large weather balloons across the country and offered $40K to the team to find all of them first using social media and digital networks.

The MIT team won, Stein proudly explained, by leveraging financial engineering. Its members calculated that $40K amounts to $4K per balloon, so they constructed a pyramidal reward system — $2K if a person localized the balloon, $1K if you tell someone where to find it, and so on, while the remaining funds would go to charity. When another team tried with only charity as the incentive, it gathered only one third of the participants the MIT team recruited.

So a system based on charity alone is not viable, but it works when it piggybacks on the lure of a reward. Stein wants to apply this principle to cancer funding, because in his view, the current models are inadequate. “There’s plenty of drugs waiting to be tested,” he said. However, “there’s a backlog of 20 years of drugs that are waiting to be tested but can’t be funded.” This early-stage bottleneck is what’s known as the Valley of Death in biotech. 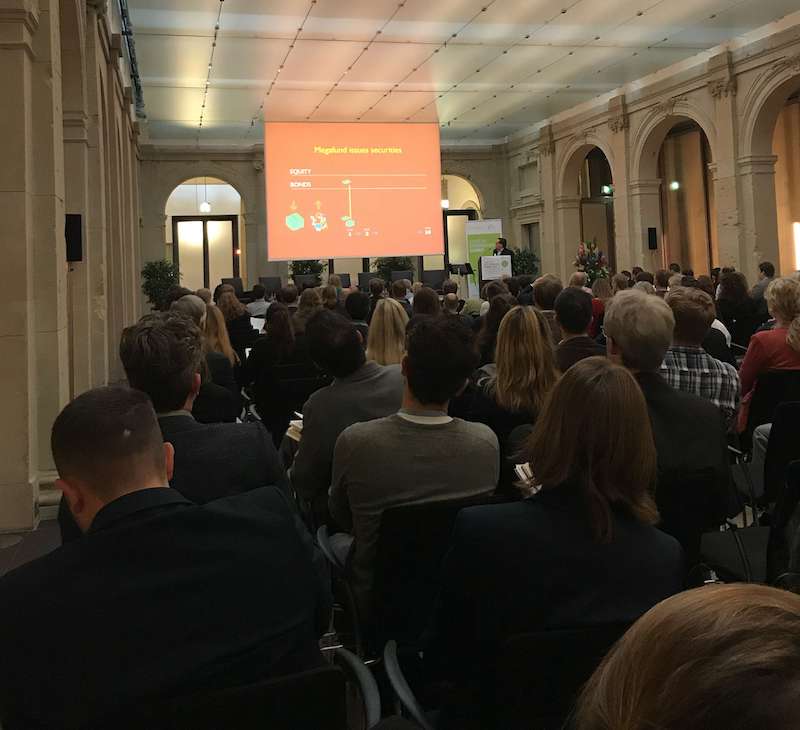 Cancer drug research and development poses an investment problem: as Stein noted, there is roughly a 5% chance that a given drug will succeed. A venture capital firm approaches this sinkhole by throwing lots and lots of money at it, amassing a large portfolio in the hope that one of the companies in it will make bank.

Another model is debt financing. According to Stein, this only works with a large number (say, 150) of drugs. So it falls to a megafund with between €3B and €15B under its management. These funds issue debt and equity to generate a cash flow; when a company reaches the next stage, the megafund can sell some shares to finance new investments. Such funds could make a 12% return, according to Stein’s calculations.

“Those returns aren’t going to be attractive to a venture capitalist,” he observed. “But it turns out, there are lots of other folks who would be interested in that. That’s right in the investment sweet spot of pension funds.” Those ‘other folks’ are average people like the participants in the DARPA contest, who were interested in joining a charitable effort for a financial gain.

Stein’s model works in theory and could be a new way to finance drug development. What he needs now is people to create the fund and see if it works in practice! If you feel like taking on the challenge, read more on his research here.

Editor’s note: After reaching out to Roger Stein following the publication of this article, he noted that more recent results suggest that for orphan diseases fewer compounds would be required in the fund’s portfolio (because trial costs are lower and POTS are higher). This means that portfolios can be funded for less (sometimes much less) than $1B.

Here is more reading on the topic.