Crescendo Biologics has positioned itself as the successor of Cambridge Antibody Technology and a new rival to Morphosys. We interviewed CEO Peter Pack.

Peter Pack started working in life science 25 years ago — “quite a long time ago,” he laughs. “I’m an old guy now.” Now the CEO of Crescendo Biologics, whose Humabody platform of simplified but multi-functional, antibody-like therapeutics may revolutionize the field, Pack started his career at the German antibody giant, MorphoSys, in its very early days around 1992.

Morphosys became the very first German biotech company to go public in 1999, and it has risen to become one of the household names in European biotech. “At the time, it was directly competing with Cambridge Antibody Technology,” or CAT, explains Pack, “but CAT no longer exists since it was successfully sold to AstraZeneca.”

A lot of CAT’s talent eventually moved to Crescendo after the buyout in 2006. “We have many ex-CAT people and ex-AstraZeneca people on the team who were my direct competitors 25 years ago,” says Pack. In particular, he mentioned Kevin Johnson, the former CAT CTO, who was “my counterpart — kind of an opponent, but also a role model.” Johnson is now the Chairman of the Board of Directors.

Since Crescendo sealed a €700M deal with Takeda last fall, the company has grown a lot in the past 6 months. “When we last talked [about the deal], we had 30 people, but now we have 60,” Pack told me. But how did it all start, and where is the company going now? 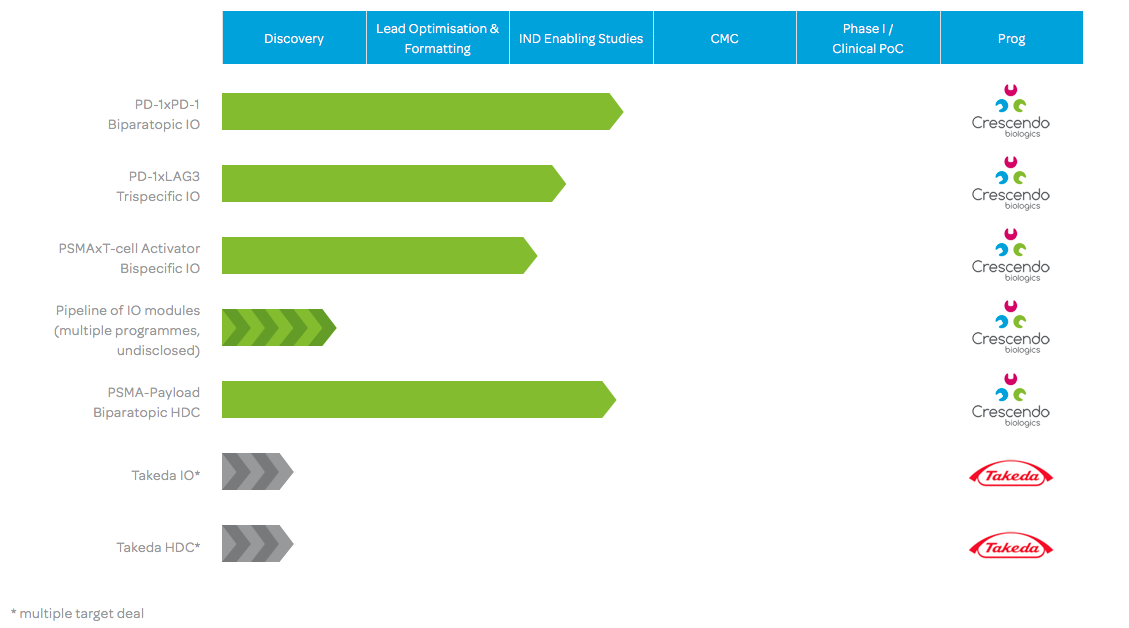 Tell me a bit about the history of Crescendo and what you guys are working on.

It’s actually a relatively mature company — we got started in 2009 as a spinout of the Babraham Institute, a little south of Cambridge, UK. We’re still located at the Institute campus, and we’re still its only spinout. In the first 5 years, Crescendo built the perfect transgenic mouse to create fully human VH domains by in vivo maturation.

A lot of the antibodies that are blockbusters now are humanized mouse antibodies for historic reasons, but humanization is really time consuming and you never get a real human sequence. The CAT founders came up with the idea of amplifying genes from human donors to create big “naïve” libraries which were screened for existing binders by a technology called phage display.

Morphosys chose a similar approach in the early 90s, but their naïve libraries of human sequences were fully gene-synthetic via a revolutionary approach at that time. Both technologies, however, rely on further in vitro optimization in the lab to improve affinity, specificity and robustness of the library members initially isolated by phage display to bind a given target. 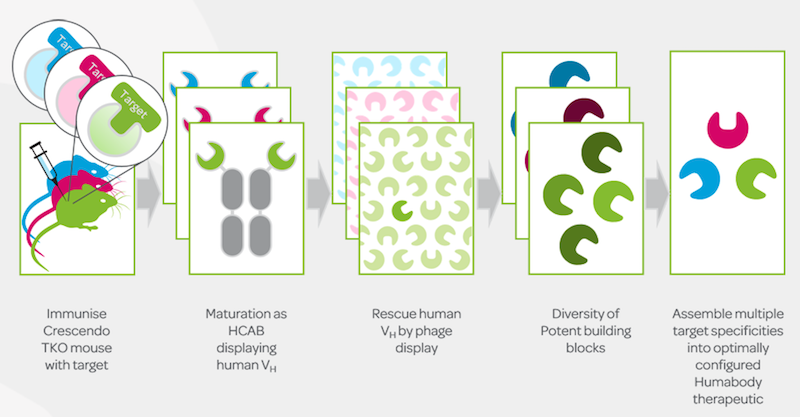 What Crescendo has done is transplant as many human antibody heavy chain gene families as possible into a transgenic mouse and to delete or knock out all of the mouse genes coding for mouse antibodies. The mouse can then assemble and optimize genetic elements to create fully human VH fragments, the crucial antibody domains for binding to targets.

Crescendo’s focus is using this process to create VH domains to target cancer-specific antigens and immune-oncology checkpoints. The in vivo maturation process results in very stable (in terms of pH and temperature) and well-expressed VH domains of high affinity and specificity for the target used for immunization.

That makes a big difference from fishing out an existing antibody fragment in a kind of random process from a huge naïve library and then optimizing it further in the lab. The Crescendo mouse, on the other hand, very rapidly creates tailor-made therapeutics that can be produced at extremely high yields in simple expression systems like E. coli.

Ok, but your technology only takes one part of the antibody, the heavy chain variable (VH) domain?

Yes, the Crescendo mouse has had all of its normal antibody genes knocked out or silenced — meaning the immunoglobulin heavy chain and each of the two types of immunoglobulin light chains — so we say it is a triple knockout mouse. What we have put back into the mouse are the genes encoding a wide structural variety of human VH domains, which are the tip of the antibody and are responsible for tight and specific binding to targets.

Usually when you have both the heavy chain or the light chain present during in vivo maturation as nearly all competitors in the transgenic field do, you need to have both the heavy and light chain present in your final therapeutic product in order to make it stable. And companies like CAT and Morphosys that use single chain Fv or Fab fragments have to engineer them back into a large conventional antibody to create an optimized product.

The Crescendo mouse deliberately has no light chains — this is what we mean when we say the VH domains from the Crescendo Mouse do not need to be ‘heterodimerized with a light chain component’  —  and as a consequence we’re able to focus on optimizing just the heavy chain VH domain.

Its robustness means that it’s simple for us to genetically fuse two or more different VHs to create more sophisticated biologics capable of binding two or more targets at the same time — actually up to six. This makes a Humabody more potent and allows us to tap the huge potential of new modes of action. Humabodies are created by the modular assembly of VH building blocks which, at 12kDa, are just one tenth the size of a full-length antibody. Due to their large size, penetration of solid tumours by full length antibodies is both slow and inefficient . Such bulky molecules require several hours to get into a tumor after injection, unlike the substantially smaller Humabodies that demonstrate superior biodistribution when applied systemically and penetrate far more deeply into solid tumours in just minutes.

Pharma companies tended to be a bit conservative 20 years ago, preferring the conventional full size antibody format for their product pipeline. However, times have changed and with our new technology, Crescendo can create the next wave of smaller, more potent biologics engaging one or more targets in ways that conventional antibodies simply cannot.

So which companies are your competitors?

Ablynx in Belgium, which is larger than Crescendo and has been established for longer, is successfully developing similar biologics by immunizing llamas to produce both conventional full length antibodies and VH-like molecules at the same time. The latter can be assembled by Ablynx to create multifunctional biologics.

But at the end of the day, the Ablynx molecules come from a llama, so they have to be humanized to make them more like a human molecule. In addition and in contrast with this approach, a transgenic mouse technology is a scalable platform, so Crescendo can easily breed dozens or hundreds of our transgenic mice as necessary for multi-target deals while Ablynx cannot. 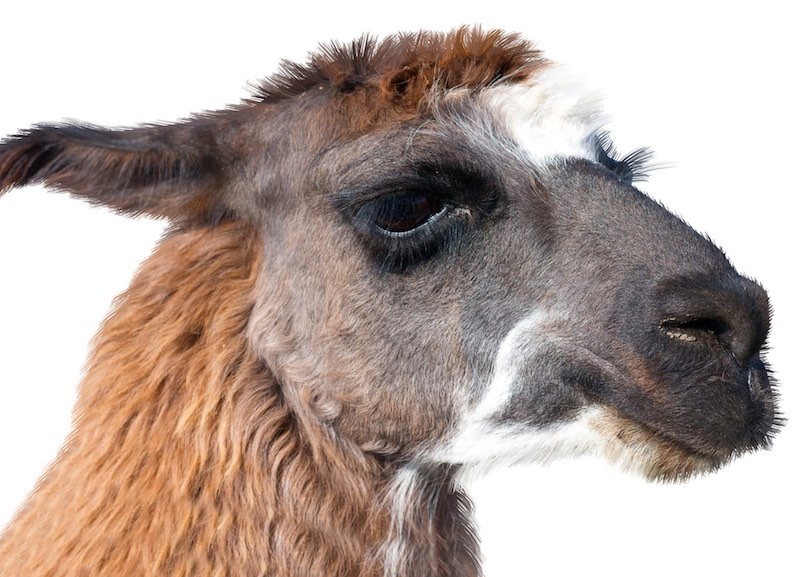 Then there are companies like Bicycle Therapeutics, which utilizes libraries of small peptides instead of protein domains; Molecular Partners or Pieris, both of which work with heavily engineered protein domains called ‘alternative scaffolds,’ always starting their selection process by screening large randomized, synthetic libraries. However, the alternative scaffolds are artificial and are not optimized by an in vivo assembly process, and as such, the optimization of initially selected binders in the lab is a lengthy process and the molecules retain a high risk of being immunogenic once they are injected.

And what are your next steps?

Since the deal with Takeda, we’ve grown our internal pipeline quite a lot — we have some really differentiated molecules in the immuno-oncology space with novel modes of action. We’ve accelerated these programs substantially over the last few months in order to achieve in vitro and in vivo proof of concept as fast as we can. We’re also hybridizing our business model. We were initially a platform company and now, instead of becoming a service company, we’re advancing our own products in oncology from this platform.

Then, we’d like to make the transgenic platform and formatting capabilities available to a few more pharma companies in a more exclusive way. This way, we can also validate our platform externally and use the proceeds to strengthen our internal pipeline.  We’re looking for partners in multitarget deals in oncology.

With our differentiated, multifunctional Humabodies built from fully human, in vivo-matured VH building blocks, we have developed differentiated biologics with new therapeutically relevant modes-of-action. That’s what we aim to harvest fruit from.