Heptares is expanding into a range of indications with its GPCR platform. I caught up with CSO & co-founder Fiona Marshall to hear more about the strategy.

Fiona Marshall has always worked on G-protein coupled receptors, or GPCRs for short. These entities are key to many eukaryotic signaling pathways, and because of their prevalence, they’re the targets of roughly 40% of modern medicines. After finishing her PhD on neuropeptide receptors, Marshall continued her work at GSK, Millennium and then as an independent consultant. When she went to analyze work to stabilize GPCRs at the MRC Laboratory of Molecular Biology, Marshall crossed paths with a former colleague, Malcolm Weir, and together with the scientists at the LMB, they founded the company that has risen to become the dominant player in the GPCR space: Heptares Therapeutics.

“We have dabbled in other membrane proteins — certainly, the technology can apply to others,” Marshall told me. “But, primarily, Heptares is still very much focused on GPCRs, because they’re such a huge target class: there’s so much opportunity there.”

The prevalence of GPCRs means that a number of companies are working on drugs that target individual receptors, but the GPCR space as a whole is relatively unpopulated by biotechs. Besides Confo Therapeutics, a startup we heard pitch at Refresh last month, Heptares has no real competitors when it comes to the structural biology of GPCRs. Although many companies have drugs that work through GPCRs in their pipelines, these are not usually discovered using structure-based design.

“There’s a lot of data showing that compounds that have come out of high-throughput screens aren’t properly optimized for the target,” Marshall said. “They often have off-target effects, which can be hitting other targets or unexpected toxicity. There are quite a few papers that show that compounds coming out of a structure-based design with optimized molecular properties have lower attrition and higher success rates.”

That’s where Heptares has found a foothold: with its focus on GPCR structure, the company has developed a platform called StaR to stabilize these tricky receptors, identify the best conformations of the receptors and design drugs to fit them. “We introduce a small number of mutations into the receptor that help to maintain the proper shape and conformation of the GPCR when it’s taken out of the cell and put it in a detergent environment for crystallization,” Marshall explained.

“We’re using a whole range of different computational approaches including molecular dynamic simulations, which model the movements of proteins,” she continued. These programs study the receptors’ behaviors in a cell’s lipid bilayer and in the presence of a drug. “We then use computational methods to design even better drugs that perfectly fit the pockets in the receptor protein,” Marshall explained. Then, the company re-inserts the receptors into the cells to ensure that the induced mutations don’t alter ligand binding. Finally, the designer compounds are then tested in normal receptors, both in cells and disease-relevant tissues.

She believes the company holds a unique position in the space because of its comprehensive approach to GPCRs. Drug design is just the first part of the package: “We’re also using innovative translational strategies as we progress through the clinic, and because of that, I don’t think we really have any direct competitors,” she said. 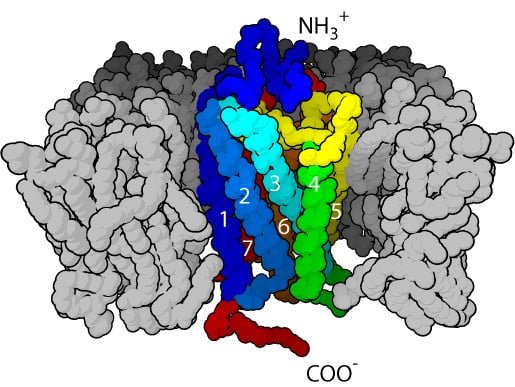 Heptares began as a platform company, but as Marshall told me, “from the very beginning, the management team and the investors wanted us to use the platform to generate our own valuable pipeline. We know that our platform keeps on producing, so we’re going to keep using it to build the pipeline — that’s really the plan to grow the company with Sosei,” the Japanese pharma that acquired Heptares in 2015.

This ambition is the key to the company’s strategy in picking target indications. “A lot of GPCRs are activated by hormones,” said Marshall, “and endocrine diseases are an example of smaller indications where we can more easily take candidates through all the way to the market.”

Speaking to the broad reach of GPCRs, Marshall told me, “We’ve also built up significant expertise in the CNS area,” making the field a prime target for Heptares’ next wave of drugs. The cohort will include candidates for narcolepsy and drug addiction, as well as some undisclosed leads in pain that became the subject of a deal with Daiichi Sankyo. Marshall described the collaboration, “they have one specific target, but they were struggling to get the right sort of chemistry…so they came to us to collaborate on exploring the structures and identifying the right novel chemistry.”

This Japanese giant is the most recent of Heptares’ pharma partners — the biotech has already collected quite a stable of them. Marshall pointed to Pfizer in particular, which chose to work with the company as its main GPCR partner in drug discovery after seeing the value of applying structure-based design to its enzyme programs. Meanwhile, Allergan, Teva and AstraZeneca have all signed on to license drug candidates discovered by the Heptares team.

The acquisition by Sosei was the key to this development: “Since the acquisition, we can take candidates deep into the clinic ourselves, potentially all the way through to market,” said Marshall, which has allowed Heptares to boast a pipeline in addition to its platform technology.

The British biotech outsources a lot of its work. “We are semi-virtual for quite a lot of the components of our process,” Marshall told me. “The core platform technology is all done within Heptares because that involves a lot of know-how, but  much of our chemistry, for example,  is done by chemists in India, China, and other CROs in the UK.”

To those who balk at becoming a virtual biotech, her advice is, “you can’t give the CRO complete freedom: They need to be managed, so you do need people in-house to oversee their work. You need to spend your time really working out who are the best people for you to work with. When we started, we ran projects in parallel with a number of different companies to figure out who was the best fit for us. And then you develop long-term relationships, and trust, with those companies.”

Marshall remarked that this style confers a huge advantage: “It’s very flexible, and you can pull in expertise.” This flexibility became critical to Heptares’ success, because, as she described, “GPCR research is applicable to many different therapeutic areas — it would be very difficult to manage if we did everything in-house because you’d need so many different disease experts and types of animal models. But by outsourcing, you can get the leading people who run the best models and bring in consultants who are experts in certain disease areas.” By going virtual, a biotech can really have it all.