As the CEO of Evotec, one of Europe’s largest biotech companies, Werner Lanthaler is in a unique position to look into the future of the biotech industry. At Labiotech Refresh in Vienna, Lanthaler shared his views on where the industry is headed — and how to stay ahead of the game.

The last decade has seen tremendous change in multiple industries, especially with the advent of digital technologies. “There is not a single industry that can afford not to think how transformation has to happen,” said Lanthaler. “There’s one thing that is also clear. Transformation is only a good thing for the companies that proactively transform. If you wait for your industry to be transformed, you will be transformed.”

The figures speak for themselves; change is needed in the biotech industry. In 2010, the average cost to bring a treatment to market was €1Bn. In 2018, that figure reached almost €2Bn. In the same period, the average peak sales went down from €720M to €360M.

“The blockbuster world is over because the development costs are going up, but sales, despite the fact that we have more approvals than ever before, are going down,” explained Lanthaler. “Why? Because we have better drugs than ever before. This is the result of precision medicine and it’s fantastic, but it needs for us to rethink our commercial models.”

Lanthaler believes one key area where the industry needs to focus on is on improving the translation of early-stage research into humans. It takes years and millions to take a drug to clinical testing, but only about 10% of those drugs end up making it to the market. We need to be able to better predict which drugs will work and be safe in humans, and find out which won’t earlier, ideally before the start of human testing.

Fortunately, many new technologies are helping the biotech industry get there. Genome sequencing is one of them. While 10 years ago it cost hundreds of thousands of dollars to read the entire sequence of a person’s genome, today it can be done for under $1,000. This has helped researchers screen the DNA of patients to find genetic biomarkers to help choose the most suitable treatment for a person based on their genetics. 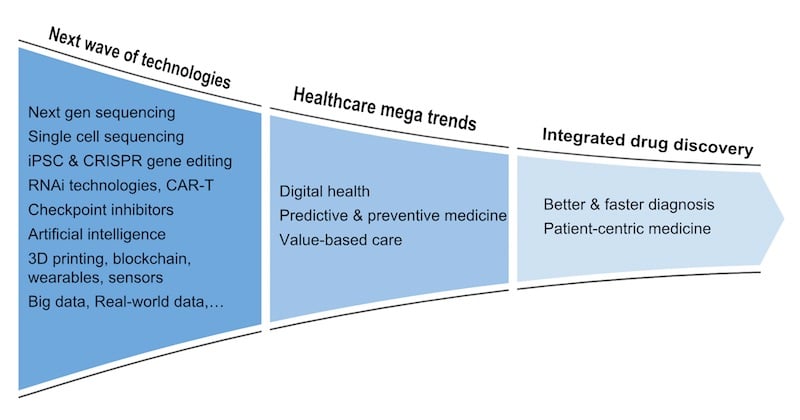 In clinical trials run between 2006 and 2015, the figures reveal that 25.9% of drugs tested in studies that used biomarkers to identify and stratify patients made it from phase I to market approval. In studies that did not include biomarker information, the probability was 8.4%.

“Just think about that! A three times higher success rate if you have a human genetic prediction,” said Lanthaler.

New technologies in preclinical testing are also making a difference. In some diseases, such as Alzheimer’s, current animal models are no good at predicting whether a drug will work in humans. But today, scientists are able to turn any human cell into a stem cell to create custom ‘disease in a dish’ models.

“Yes, it sounded like science fiction 10 years ago,” said Lanthaler, “but it is becoming a reality where, all of a sudden, we can circumvent the translational errors of early models that don’t have any predictability.”

Building on this trend, new technologies such as organoids, organs-on-chips and 3D bioprinting are helping mimic the real behavior of human tissues in the lab, improving on and eventually possibly even replacing part of the animal testing steps.

But predicting the likelihood of a drug making it to market could happen even earlier in the drug development process. This could be possible thanks to artificial intelligence, a field where Evotec is very active. The company is a shareholder of Exscientia, a company using AI to make the drug discovery process faster and more affordable, and they are working together in several projects.

“It’s not only about more data, but about knowledge. That’s why I am a firm believer in AI. It will change our industry, but only if we transform data into knowledge and with this, into better translatability for drugs,” said Lanthaler.

He doesn’t see AI as a threat to the job of chemists and biologists, which he says will still be essential to test predictions and feed data into the AI platforms so that they become ‘smarter’. Rather, he sees it as an opportunity to transform jobs, as scientists will be able to do more experiments and complete projects faster. “No one can accept the efficiency output that we have today in the industry because cost pressure will come. It’s just a given.”

As the biotech industry shifts, Lanthaler believes the translation of academic projects into the industry will be essential. However, how this is done could be crucial. “Many public institutions now think that the best thing they can do is to make mini pharma companies out of academia. I would strongly advise against this,” he warned.

Instead, he believes collaborations will be key to making the most of the money and resources available. “Why would you build a clinical operation to make one clinical trial in Alzheimer’s?”

Evotec has been actively trying to bridge the gap that exists between academia and the industry and is changing the way these kind of partnerships are established. In exchange for a stake in any spin-outs created, Evotec helps academics in its partner universities validate their results and make sure they are reproducible — which is a big issue in academia, as it is estimated that 65% of the data published in scientific journals cannot be reproduced.

Academics are not the only ones who will be essential to the transformation of the biotech industry. Lanthaler believes the spectrum of players involved is growing, helping the industry push forward. “Patient foundations have learned in the last 15 years that just donating money to academia does not help their patients. That’s why many of these foundations now are actively starting drug-discovery projects.”

With the rapid growth of digital technologies, other industries would start playing an important role in the future of biotech. “If you just look at the cash benefits of Apple, they can buy any pharma company just out of pocket money, but they are not doing it because of the complexity of our industry… I think in reality they are all looking for the entry point, they are all doing their homework,” said Lanthaler. “Like it or not, digital tech will come and will ultimately fully converge with the way we develop drugs”

Together, all these players will help the biotech industry overcome its current challenges. “The pharma industry as we know it in the last 50 years will not be the pharma industry in the next 50 years,” said Lanthaler. “Transformation, in an active way, and translation into a much more patient-centric view are two things that we have to focus on. Being holistic in the way we think about drug discovery from the very beginning is key.”