We live in a society obsessed with sex. Yet many of us forget that other living beings can have their own issues and needs in the reproductive area. A group of artists and designers from Slovenia got together to create fictional sex toys for the specific problems of plants.

The devices, on exhibition at Art Laboratory Berlin until November 18, fire the imagination of the viewer with clever and aesthetically pleasing devices that, for once, put plants — and their reproduction — at the forefront.

As the authors point out, this ‘case study in the extreme’ is inherently absurd and humorous, but it still raises a lot of questions around how we humans perceive plants. Often relegated to the category of objects, they can be very different from us — something that Petrič noted is that, unlike us, pleasure is absent from sex in the plant realm. At the same time, they are complex, living organisms that can also have quite complex ‘needs’ that we often disregard. But when we do try to understand them, are we really able to do so without projecting our own needs and values into them?

Let’s have a look at the devices so you can judge for yourself.

Better known as pitcher plant, Sarracenia purpurea is a carnivorous plant that lures insects into entering the pitcher, a sac where they are trapped and digested. Although these insects are the main source of nutrition for the plant, during the flowering all efforts are put on reproduction and the digestion process is less efficient. 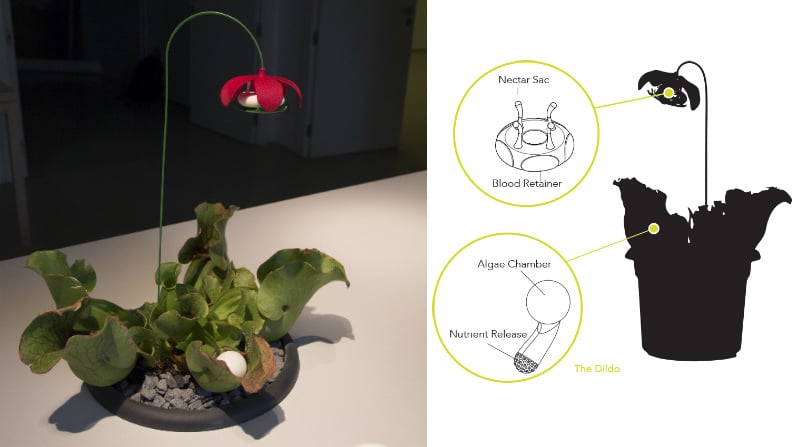 Carnations have beautiful flowers that have been artificially bred for aesthetic purposes, increasing the number of petals they have. Although this makes them popular among humans, it increases the chances of getting the plant equivalent to an STD — fungal infections that are spread by insects.

The fungus inhibits the reproductive ability of the plant, and a single infected flower can render the whole plant infertile. To solve this problem, the designers created a cap that blocks insects from selected flowers, in order to allow reproduction while reducing the chances of infection. The caps have a beautiful lace design that is intended to preserve the aesthetic properties that we seek in the carnation plant. 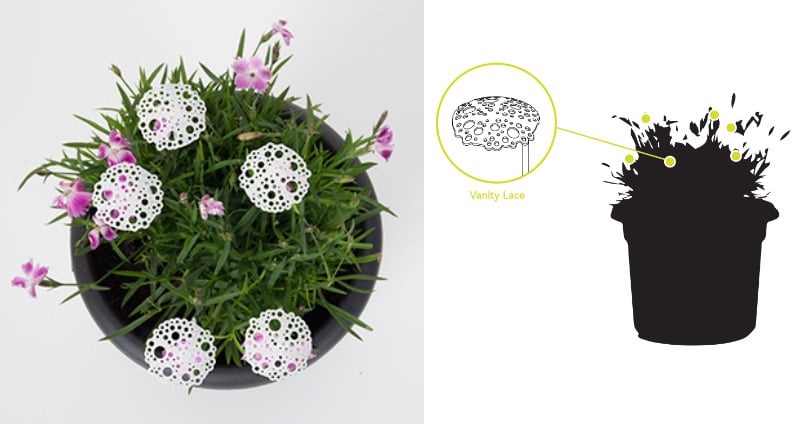 Cyclamen plants have evolved to only reproduce in the presence of a very unique pollinator. In order to release its pollen, the plant needs a specific species of bee that shakes the flower with a specific frequency. The problem is that this bee species is extinct.

Abutilon pictum are evergreen plants valued for their looks. There is a virus that infects the plant and creates yellow spots on its leaves, which makes them more coveted among gardeners. However, the virus is not transmitted to the offspring, making it necessary to inoculate the young plants with the virus to bring up the spots.

The designers made an inoculation kit where whiteflies are used to transfer the virus to the plant. In order to prevent the flies from spreading, they are placed into cups that are attached to the plant’s stem, from where the virus can spread through the plant.

Spicing up the sex life of turmeric

Turmeric is highly valued for the curcumin spice obtained from its roots. The plant’s main problem is that it does not have a sex life — it can only reproduce through asexual reproduction, meaning its offspring are clones of itself. The genes of the plant do not change from one generation to the next, limiting its diversity and it ability to evolve and adapt to the environment.

To help the turmeric plant, the designers came up with a kit with which the plant’s root is tied to a balloon filled with helium. As the balloon floats up to the upper layers of the atmosphere, the plant received high levels of radiation that mutate the DNA, increasing its genetic diversity. When the balloon explodes, it returns to the soil ready to give birth to a new generation of turmeric plants.

Canna lilies are beautiful orange flowers that have evolved to be pollinated by hummingbirds. The nectar is located at the bottom of the flower, which the birds can reach with their long beaks. In gardens far from the tropical habitat of the plant, there are no hummingbirds around and bees take up the pollination job. However, they are less efficient as they are not able to see the orange color that attracts hummingbirds and have problems accessing the nectar at the bottom of the flower.

To help bees pollinate the lily, the designers made a flower plug that takes the nectar from the bottom to the outside through capillary action. In addition, a ring placed on the exterior of the flower attracts the bees with its bright yellow color and serves as a platform for the bees to deposit pollen and access the nectar from the plug, right by where the lily’s pollen is stored.

Plant Sex Consultancy will be on exhibition at Art Laboratory Berlin until November 18 along with the documentation of two other art performances by bioartist Špela Petrič exploring the nature of the ‘vegetal others’ and our relationship with them.

All images via Art Laboratory Berlin