Time to head to Helsinki, Finland, this week! We’re visiting Solar Foods, a biotech using bacteria to produce protein-rich flour out of carbon dioxide and water. 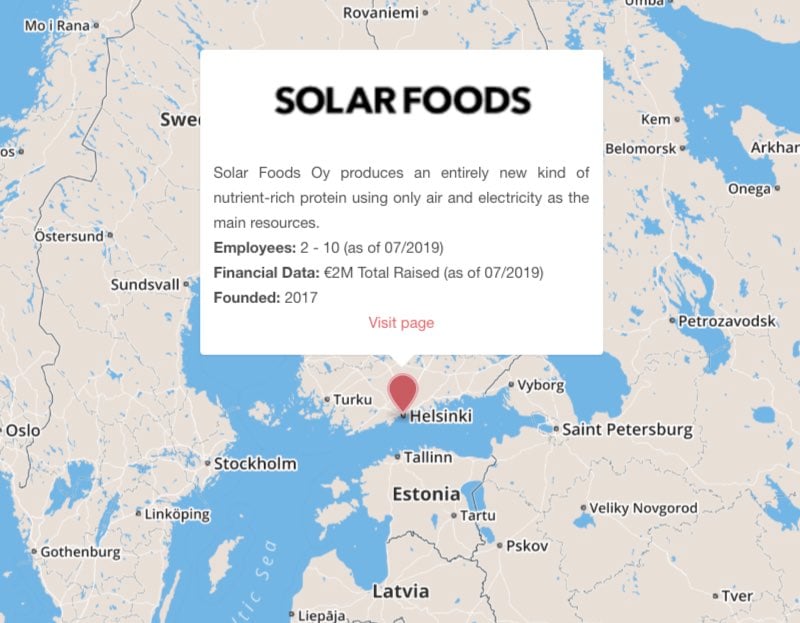 Mission: To develop a protein-rich powder that can be made with little more than bacteria, electricity and water. This production method could be more efficient and sustainable than traditional agriculture, and a practical food source for space missions.

Agriculture is a land-, energy-, and resource-intensive industry. In 2017, it was responsible for almost 10% of total carbon emissions in the US, and around 70% of global water consumption. One potential way to make food production more sustainable is growing food in the lab.

Solar Foods is developing a way to produce protein-rich food that could use 100 times less water than plants such as soy. The company first uses electricity to split water and obtain hydrogen, which is then mixed with carbon dioxide and fertilizers such as phosphorus and ammonia. These are then fed to an undisclosed type of soil-derived bacteria, and through a fermentation process, Solar Foods ends up with a powder made of 50% protein, 25% carbohydrates, 10% fat, and 15% other nutrients.

As the company’s name suggests, Solar Foods expects to use electricity produced from renewable sources, such as solar power, to produce the hydrogen. The startup is also collaborating with the European Space Agency Business Incubation Centre to develop the technology as a potential way to supply food on long space missions.

Currently producing around a kilo of the protein powder per day at a pilot scale, the company expects a commercial launch by 2021. Once commercialized, the powder could one day provide ingredients for non-meat and vegan food products.

Other companies are developing ways to grow food in the lab, such as those growing meat from cultured animal cells. However, Solar Foods’ technology doesn’t require plants or animal cells as a source. “So far, we think we are the only ones claiming to bring food grown without agriculture or aquaculture to the market,” Pasi Vainikka, CEO of the company, told me. “It is the complete disconnection from agriculture that’s different to anyone else.”

To get to the market, companies such as Solar Foods need to navigate the EU regulations on new foods. Vainikka told me that the pricing of Solar Foods’ powder will be competitive with food produced through agriculture, though didn’t specify the company’s plans for pricing.

If technology like that developed by Solar Foods is successful on a larger scale, then humanity could see traditional foods replicated via bacteria and other microbes without the same resource and land requirements of traditional agriculture. The technology could also become vital for keeping astronauts alive on space missions.

“We will see more and more of it: meat and dairy replacements produced through various kinds of fermentation,” Vainikka told me. But he cautioned that the regulatory authorities need to understand and support the technology for it to be rolled out on a larger scale and that Europe often lags behind the US in this regard.