As synthetic organic chemistry struggles to reinvent itself, the field is shifting its focus to emulating and engineering enzymes. A team of researchers in Basel has developed an artificial metalloenzyme with unique functionality that can be activated in a cell.

Since the first example was published in 2015, artificial enzymes have been a hot topic in academic research. The first attempt came from synthetic biology, generating unique enzymes from novel genetic code; and supramolecular chemists followed up shortly thereafter with a self-assembling capsule.

Now, Nature reports a team of chemists and biosystems engineers from the University of Basel, ETH Zurich in Basel, and NCCR Molecular Systems Engineering, headed by Sven Panke and Thomas Ward, has contributed the next instalment: they have created an artificial metalloenzyme with the unique capability of catalysing ring closing metathesis in cells.

Organometallic catalysts are very commonly used for industrial applications, but due to their general insolubility in water, they are usually not amenable to cell-like conditions. Additionally, glutathione is also generally present in high concentrations, and this inhibits metalloenzymes.

With these challenges in mind, the group found an ideal setting for metalloenzyme catalysis in the periplasm of E. coli. The group assembled the enzyme on site as a complex of streptavidin (SAV), biotin (biot) and Ruthenium (Ru), shown here: 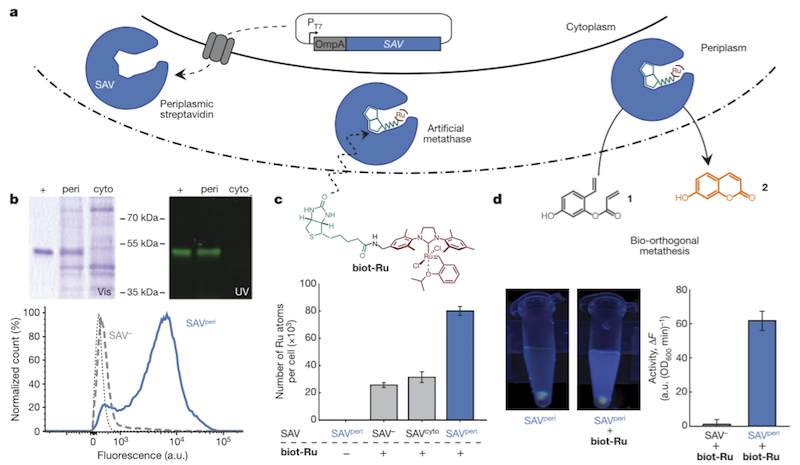 The enzyme complex, abbreviated biot-Ru-SAV, was used to catalyse ring closing metathesis to produce a fluorescent molecule as proof of concept. The model was chosen for easy detection and quantification, but the group expects to be able to apply its technology to high added-value molecules like natural products, which are very difficult to access and are potentially quite valuable as drug candidates.

This development represents an exciting advancement in biocatalysis: the field began with the simple use of enzymes to catalyse reactions in a flask, and it has expanded dramatically in recent years as enzymes are grown from DNA, mimicked with self-assembling capsules and now emulated via a Frankenstein complex of proteins and small molecules.

As Ward and Panke demonstrated, this approach can unlock highly useful synthetic functionalities that are still new to enzymes, making it not only an invaluable tool for synthetic organic chemists but also perhaps the saviour of their dying field.