Swiss biotech Chord Therapeutics launched this week with a €13.7M Series A, becoming the latest company to tackle the rare condition neuromyelitis optica, for which three therapies have been approved in less than a year.

Neuromyelitis optica spectrum disorders, previously also known as Devic disease, affect up to 2 in 100,000 people around the world. Those with the autoimmune condition endure severe nerve damage that impacts the optic nerves and spinal cord. Ninety percent of patients with this condition are women and many also have other autoimmune conditions.

Until 2019 there were no approved treatments for neuromyelitis optica. That year, Alexion Pharmaceuticals’ Soliris, a monoclonal antibody targeting the complement protein C5, was approved for the treatment of this condition by both the FDA and the EMA.

Since then, MedImmune spinout Viela Bio and Roche’s Chugai Pharmaceuticals have respectively seen their monoclonal antibodies, Uplizna and Enspryng, approved by the FDA this summer.

While the approval of these drugs is undoubtedly an enormous breakthrough for patients with this painful condition, other companies are developing alternatives to these early treatment options to broaden clinician and patient options.

“There is often no treatment or only a very limited choice of treatment options for rare diseases, and not all treatments work well for all patients, so the medical need is high,”  commented Chord Therapeutics’ CEO, Tom Plitz.

“Although rare diseases affect only a small proportion of the overall population, these patients affected by rare diseases deserve the same choice of treatment options developed with the same scientific rigor as for more common conditions.”

Chord Therapeutics is developing an oral small molecule treatment with a different approach to Alexion and the other antibody developers, whose drugs require intravenous injection. The company also targets another rare neuromuscular condition, myasthenia gravis, with the same drug candidate.

“Chord Therapeutics aims to produce the first oral disease-modifying treatment for neuromyelitis optica spectrum disorders,” commented Plitz, “so no needles involved, no injections or infusions required. The use of [our treatment] will be extremely convenient for the patient, requiring only a few dosing days per year.” 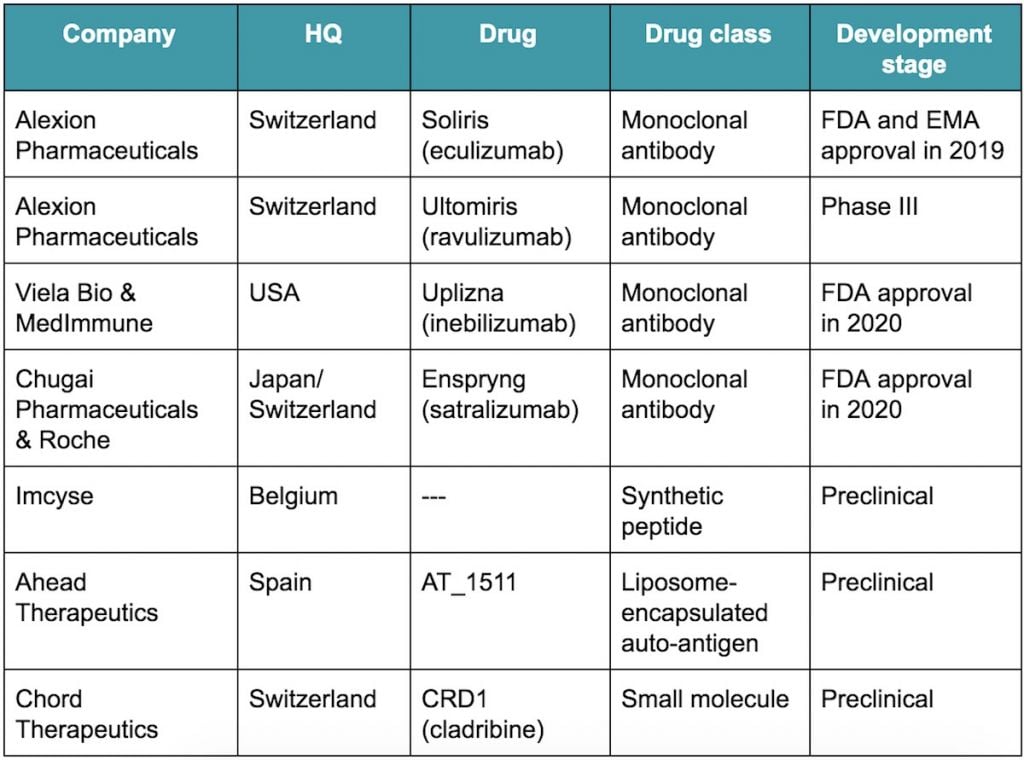 Other European biotechs such as Belgium’s Imcyse and Spain’s Ahead Therapeutics are also aiming to target this condition. The two companies are developing synthetic peptide and liposome-encapsulated candidates, both currently at the preclinical phase.

Alexion is holding onto its lead position in this field, however, and is already testing a longer-lasting antibody treatment for neuromyelitis optical in phase III trials.

“Soliris has set a very high standard for effectiveness in treating the most devastating part of the disease – the relapses, or attacks, that can result in blindness and paralysis,” said Laura Gault, Head of Neurology Clinical Development at Alexion. “In the phase III study, 98% of those receiving Soliris were relapse-free at 48 weeks.”

Soliris is approved for treating two other rare diseases affecting the blood. Alexion began selling the antibody treatment in 2007, and in 2010 it had the somewhat dubious fame of being the most expensive drug in the world. Although other drugs have now eclipsed this record, Soliris is still expensive and costs approximately €430,000 per year in the US.

With more treatment options being developed, another benefit for patients with rare conditions such as neuromyelitis optica is that an increase in competition levels should help reduce treatment prices for patients and medical treatment providers.