GenSight will start a clinical trial in the UK testing a combination of gene therapy and a wearable device to restore sight in patients with retinitis pigmentosa.

The UK Medicines and Healthcare Regulatory Agency (MHRA) has accepted GenSight’s application to run a first clinical trial in the UK testing a new type of therapy with the potential to treat all forms of retinitis pigmentosa. This genetic disease causes progressive vision loss, often leading to blindness by age 40.

The Phase I/II trial, called PIONEER, will study the safety and tolerability of GenSight’s therapy, called GS030, in patients with end-stage retinitis pigmentosa with vision not better than “counting fingers.” The company expects to treat the first patient in the first quarter of 2018 and will measure the outcome after a year.

GS030 is a combination of a gene therapy and a wearable “optronic visual stimulation device.” The gene therapy step introduces a gene that encodes for a protein sensitive to light into specific neurons. The wearable device is a pair of goggles that capture images and transform them into light patterns that stimulate the light-sensitive proteins in the neurons, which send the visual signal to the brain. 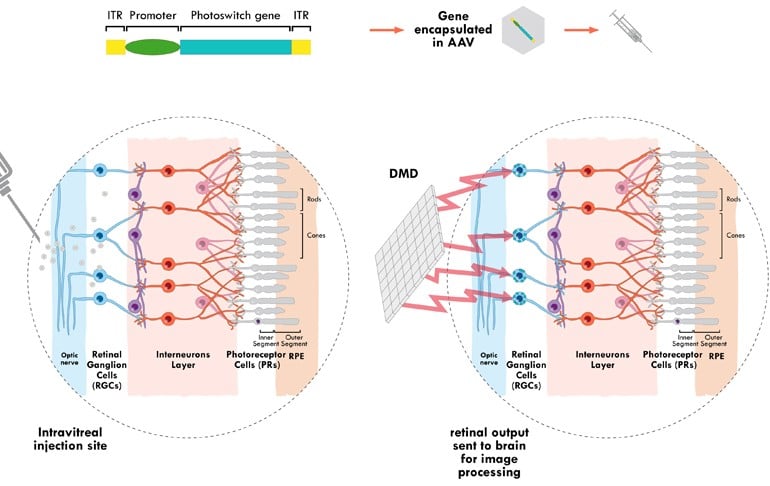 The need to transform the visual signals stems from the fact that the light-sensitive protein delivered to the neurons has less sensitivity than that of healthy human photoreceptors. This information is processed in a pocket computer the size of a mobile phone.

GenSight estimates that there are over 100 genetic defects that can cause retinitis pigmentosa, which would make it a very hard, long and expensive process to develop individual gene therapies for all of them. Its solution has the potential to address all types of the disease, for which there is no treatment available despite it being the most common genetic cause of blindness. CEO and co-founder Bernard Gilly stated that the therapy could also be extended to other retinal diseases such as dry age-related macular degeneration (dry-AMD).