A new study presents a novel synthetic biology approach for antibiotic synthesis in yeast that could tackle the huge challenge of antibiotic resistance.

Scientists at Imperial College London have hacked their way into introducing complex biosynthesis pathways in the baker’s yeast Saccharomyces cerevisiae. In particular, they focused on the production of non-ribosomal peptides (Nrp), a group of peptide molecules that do not require mRNA for their synthesis. Many front line antibiotics, such as vancomycin or daptomycin, belong to this group.

The researchers chose penicillin as the proving ground to engineer these peptides and published the results in Nature Communications. First, they introduced five genes from P. chrysogenum enzymes into S. cerevisiae to recreate the synthesis pathway. The initial yield was too low, so the next step was optimization.

By constructing and testing thousands of different arrangements of promoters with various strength and expression dynamics, the scientists were able to identify a combination that increased the yield by 50 fold. Of note, this step employed the MinION DNA sequencer from Oxford Nanopore, a company seeking to disrupt the next-generation sequencing market. 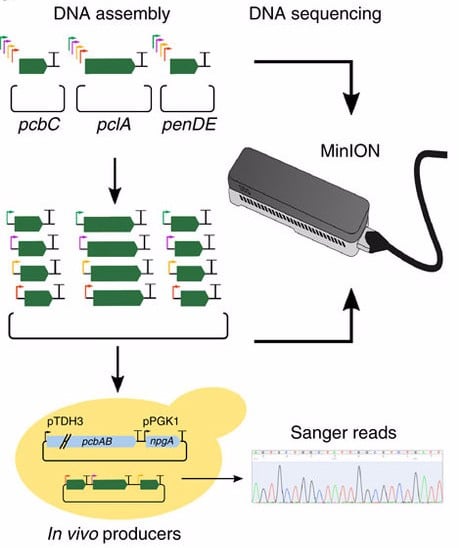 This is the first time the versatile S. cerevisiae has been used to produce bioactive Nrp antibiotics. With the wide range of engineering tools available for this organism, the authors expect this study to establish the paradigm for complex biosynthesis in fungi. Given the modular nature of non-ribosomal peptide synthases (NRPS), the researchers predict the enzymes can be easily engineered to create chimeric NRPS that can synthesize complex compounds.

In particular, the exploitation of these pathways in S. cerevisiae, which is already routinely used in industrial production, could provide an alternative to the traditional methods for antibiotic synthesis. As the authors note, the number of new antibiotics developed through these means is decreasing. New technology is definitely required given that antibiotic resistance in deadly pathogens is on the rise and there is an urgent need for new antimicrobials.