In its second year, Oxitec has reduced the mosquito population in a Brazilian neighborhood by 81%, demonstrating the long-term potential of GM insects.

Oxitec is a spin-out from the University of Oxford that fights infectious disease with genetically-engineered mosquitoes that produce inviable offspring. The company has already made field trials in the Cayman Islands, Panama, Brazil, the US and rmost recently India.

Among them, Brazil has been a huge success. There, mosquito larvae were reduced by 82% last year, which led to a massive 91% drop in dengue fever cases. Now, Oxitec has demonstrated that its approach can sustain mosquito reduction in the long term. Released in a neighborhood of Piracicaba, the company has achieved an 81% reduction in mosquito larvae in the second year. 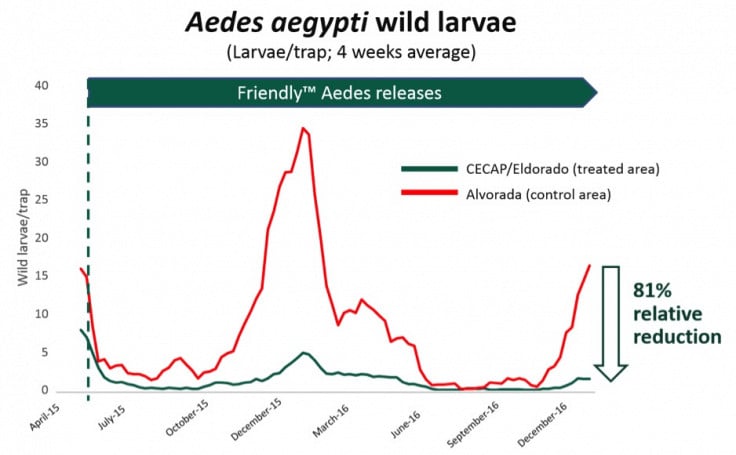 In addition, a new trial in a second, central neighborhood of Piracaciba, has shown a 78% mosquito reduction in only 6 months. Since last October, the city counts with a large-scale mosquito factory to produce Oxitec’s Friendly Aedes mosquito, a modified strain of the Aedes aegypti species that acts as the main vector for dengue, zika, yellow fever and chikungunya.

Oxitec is proud of its solution for the spread of infectious disease, which is more effective than traditional methods such as insecticides, and also more eco-friendly, given that the modified mosquitoes die with their offspring, leaving no trace in the ecosystem.

However, researchers expect that the importation of such a technology to Europe, where it could be beneficial to limit crop pests, will face regulatory challenges. In general, Europe is lagging behind countries such as America and China in terms of gene editing given its conservative, sometimes outdated regulations.