Roche’s acquisition of the Irish biotech Inflazome is a vote of confidence for emerging inflammatory disease drugs. How could other companies in the field benefit from this takeover?

The inflammation process is essential for our survival, as it helps the body to clear up damage after injury. However, uncontrolled inflammation can also harm us, causing damage in chronic conditions such as neurodegenerative disease, arthritis, and cardiovascular disease.

Current treatments for inflammatory diseases often include steroid drugs, which suppress the immune system. But these drugs can also weaken the patient against infections. For this reason, the search is on for drugs that can selectively brake inflammation without shutting down the whole immune system.

With a €380M takeover of Dublin-based Inflazome this week, Roche has acquired a pipeline of drugs that might achieve this feat. The drugs are designed to block a target called NLRP3, which is part of a group of protein complexes that trigger inflammation, known as inflammasomes.

“When activated, NLRP3 acts as a ‘danger sensor’ in the body,” said Jeremy Skillington, VP Business Development at Inflazome. “This process is an important part of a healthy inflammatory response. However, this process can also lead to chronic, uncontrolled inflammation.”

Roche’s deal continues Inflazome’s history of drawing high investor interest. The company launched in 2016 with a Novartis-backed €15M Series A round and followed up with a €40M Series B in 2018. In Roche’s takeover, only the €380M upfront payment has been disclosed; further undisclosed payments are due if the drug programs hit certain milestones.

So why has Inflazome been so popular with biotech funders? According to Skillington, one reason is that NLRP3 plays a central role in many different chronic diseases. A drug targeting NLRP3 could therefore help a huge variety of patients, making it “a very attractive proposition for pharma from a regulatory and commercial standpoint.”

In addition, Inflazome is one of the most advanced players in the NLRP3 field, with several drug programs in phase I.

“Successful completion of phase I trials earlier this year led to high levels of interest from many pharma companies in Inflazome,” said Skillington.

Other hard-hitting biotechs in the emerging NLRP3 field are Olatec Therapeutics (US) – which has drug programs at phase II – and NodThera (UK), which raised a €49M Series B round in June. The low-profile Inyel Biomedical (Spain) is an unusual case, as it’s developing the hormone melatonin as a treatment for sepsis, which could work partly by blocking NLRP3. 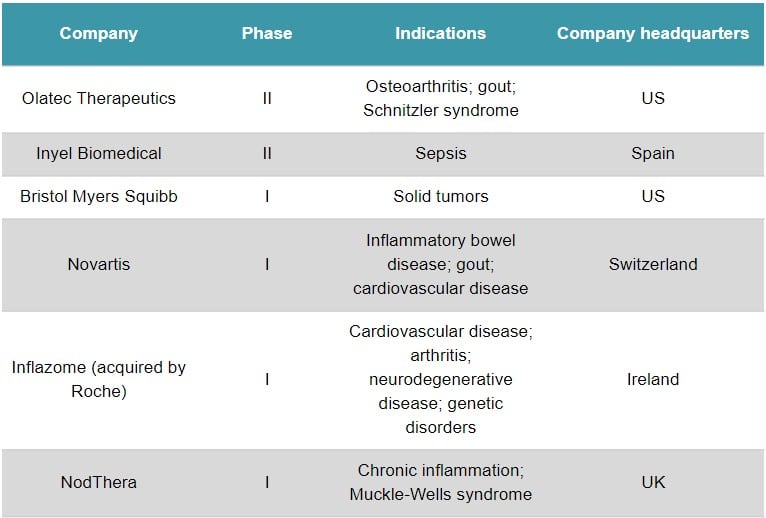 Roche’s Inflazome catch follows acquisitions of NLRP3 firm IFM Tre (US) by Novartis last year and Jecure Therapeutics (US) by Genentech in 2018. It could spell even more interest from big pharma sniffing out an opportunity to enter the race. Nanna Lüneborg, Partner at VC firm Novo Ventures – an investor in NodThera – said that Roche’s acquisition of Inflazome “confirms the huge interest of pharma in this field, and the competition for assets for building a leading position.”

Big pharma companies seem eager to jump on a relatively early-stage field, which is only beginning to test its mettle in clinical trials.

“The inflammasome has been a difficult target until recently; the key challenge was identifying selective inhibitors,” said Elizabeth Roper, Partner at the VC firm Epidarex Capital, another NodThera investor.

“We now have a better understanding of the role and importance of inflammasomes in the immune response, and with progress in selecting candidates with the right profile, and this has accelerated research in the field.”

“It may not be a direct path to clinical proof-of-concept for this mechanism, but [it may] require a longer path to explore this mechanism in the clinic,” Lüneborg said.

What’s clear is that European biotechs and investors have a lot of clout in the NLRP3 field. This isn’t always the case in biotech in general, where Europe is often seen to lag behind the US.

Furthermore, the big funding for NLRP3 research is likely to spill out into biotech companies developing treatments that tackle other parts of the inflammatory process. For example, the US startup Quench Bio – backed by UK investor Arix Bioscience – raised a €43M Series A round this year. Its mission is to treat inflammatory diseases by stopping cells from releasing inflammatory chemicals.

“The excitement around innate immune targets is still growing and the acquisitions of IFM Tre, Jecure and Inflazome show how interested pharmaceutical companies are in this nascent field,” concluded Jonathan Tobin, Managing Director at Arix Bioscience.