The MIT spin-off SQZ Biotech has an invention (Cell SQueeZe) which could make vector drug delivery in Cancer a thing of the past… Roche thinks so too, and has now acquired this small biotech for €455M upfront.

Their team’s work, supported by the US NIH and Koch Institute for Integrative Cancer Research, led to the development of the CellSqueeze platform. Thus, SQZ Biotech was founded, through which the team aims to continue to explore and develop the potential of this promising technology. 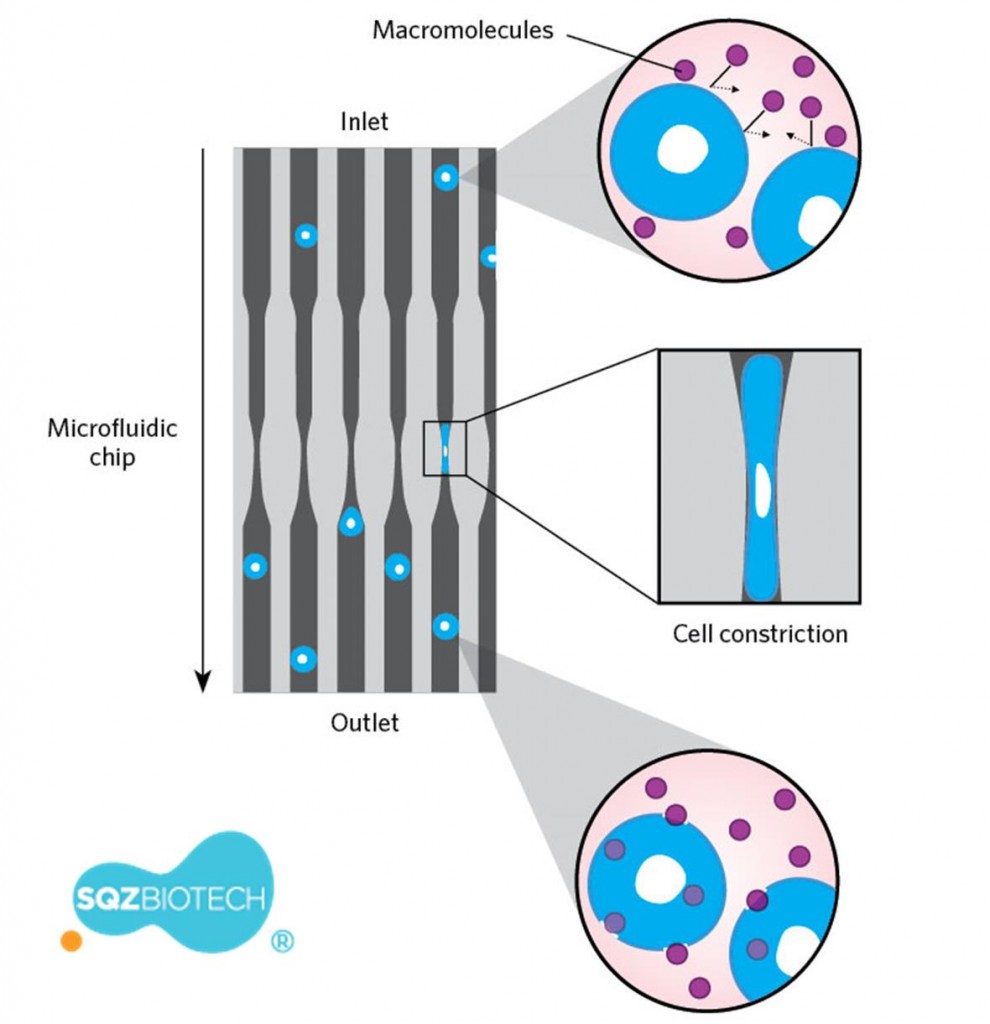 The CellSqueeze Platform is a novel method of drug delivery (as well as other small molecules) into cells which doesn’t require a vector (e.g. liposomes, viruses).

It was proven to be far superior to traditional cell penetrating technology techniques such as electroportion or transmembrane proteins (by 10-100 times) and also is significantly less toxic to non-target cells, with over 80% cell viability post CellSqueeze treatment.

Cells are suspended in the desired buffer and are flown through a CellSqueeze chip, which contains microfluidic channels that rapidly deform the target cells to induce temporary disruption of the membrane.

Image (Right): The microfluidic chip contains parallel channels, each with at least one narrow constriction designed to be smaller than diameter of a cell. As the cells squeeze through the constrictions, pores from transiently in the plasma membrane, allowing extracellular molecules to enter the cytoplasm by diffusion. The cell membrane then reseals within minutes. (Source: SQZ Biotech)

Current designs operate at throughputs of over 1,000,000 cells/s and delivery materials are selected for a variety of functions on the target cells.

Back in 2014, Armon Sharei told Nature in an interview:

…There is a lot of interest in getting peptides, proteins, antibodies, nanoparticles and other materials into cells to see what happens“

Hence, SQZ has had a lot of academic interest, with around 40 partners in total, such as Massachusetts Institute of Technology (MIT), Harvard University, the Ragon Institute, Goethe University Frankfurt (Germany) and Promega Corp.

Additionally, Boeing and the Center for the Advancement of Science in Space (CASIS) awarded the company the CASIS-Boeing Prize for Technology in Space (worth more than €182k) to support the use of CellSqueeze on the International Space Station.

Through this new €455M+ deal, Roche (the pharma Leader in cancer therapeutics) will therefore leverage SQZ’s pioneering technology to engineer B lymphocyte cells as a therapeutic platform for oncology – a novel approach with the potential to overcome many of the shortcomings of current cell-based therapies.

The key things we’re going after is oncology indications. Getting proteins in B cells has not been possible with conventional systems“

Ingenious invention…it will be interesting to see where Roche‘s expertise and resources in Cancer can take this biotech start-up.