The idea of replacing livestock with cell culture to produce meat could reduce animal cruelty, lower greenhouse gas emissions, and would require far less land to produce equivalent amounts of meat. The process starts with taking cells from a live animal and culturing them in a bioreactor. A small sample grows into trillions of cells that turn into muscle and fat.

While cultured meat promises to be a food of the future that is both ethically and ecologically more viable than farming, we are still in need of technologies that allow scaling up and reducing costs enough to compete with traditional meat production.

This approach offers some benefits for biomanufacturing. Firstly, since the media is continuously replenished, cells do not run out of resources and slow their growth as they would at the end of a batch culture. This enables the manufacture of larger amounts of product in smaller bioreactors.

Secondly, continuous cell culture connects upstream processes — including cell isolation and culture — and downstream operations — including harvesting and purifying the final product. This opens the biomanufacturing processes for automation and process control in a paradigm that some call bioprocessing 4.0. Lastly, production in continuous mode allows the product to be sampled at any time, improving quality analysis.

In recent years, there has been a renewed interest in continuous cell culture and other technologies to improve biomanufacturing. But, why now?

In the earlier years of biotech, the focus was mainly on improving upstream processes. Now that gene expression and tissue engineering have a significant level of reliability and reproducibility, the focus is increasingly on commercial-scale production with smaller bioreactors. The other driving factor is the growth of cellular agriculture for the manufacture of products like meat or leather. Since unlike pharmaceuticals these are consumer goods, they involve cost considerations and must be scalable. 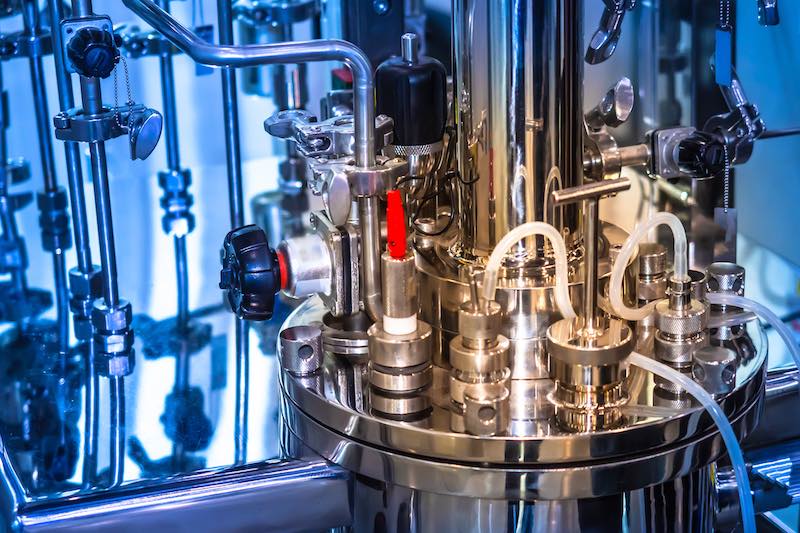 In February, British biotech CellulaREvolution raised £1M to advance the efficiency of continuous cell culture manufacturing. The company has developed a bioreactor and a peptide coating that allow growing cells without animal serum, which is typically obtained from the blood of calves. These cells need to attach to a surface in order to grow, and the technology also facilitates the detachment of cells from the bioreactor to harvest them.

“For adherent cells, the coating and bioreactor developed by CellulaREvolution provides a means for continued growth and detaching cells from the cell culturing surface,” said Leo Groenewegen, co-founder and CEO at CellulaREvolution. “This allows for a true continuous operation where the reactor system reaches a steady-state where a snapshot of the process flow and composition are the same at any given time.”

“Our technology can be used by any company aiming to culture cells at scale. These could be cultured meat companies, cell therapy companies, biologics companies, etc. We are actively engaged in collaboration with various companies where we aim to validate our technology as part of their potential production processes,” Groenewegen told me.

What does it offer for pharma?

Many different industries such as chemicals, refineries, and food have used continuous processes for decades to reduce process cycle times and waste. Continuous biomanufacturing could help the pharma industry reduce drug recalls due to contamination during manufacturing stages as well as reduce costs arising from inefficient processes. This is why the biopharma industry is starting to turn to continuous processes from cell culture to downstream operations. However, making the whole process continuous doesn’t make sense for all companies.

“It is important to understand when continuous processing has the most impact in the manufacturing steps. This is typically at the interface between upstream, midstream, and the first purification step, as this is where the highest operational volumes are being handled,” explained Tania Pereira Chilima, CTO of Univercells Technologies.

Based in Belgium, Univercells Technologies is advancing the automated and continuous manufacture of viral vaccines, oncolytic viruses, and gene therapies. The company also offers a bioreactor that promises linear scalability from the bench to the plant.

Other companies are investing in countercurrent chromatography technology, which allows continuous purification of the final product in continuous biomanufacturing processes. For example, Dutch biotech BiosanaPharma leverages its continuous cell culture platform to lower the manufacturing costs of biologics. The company’s lead drug candidate is a biosimilar version of omalizumab, a monoclonal antibody that finds application in the treatment of asthma allergies.

“Our process is tailored to CHO [Chinese hamster ovary] cells, so all products made with this cell type can be made with our continuous process,” Nettie Buitelaar, Chief Business Officer of BiosanaPharma, told me.

New technologies are driving the shift from fed-batch cultures to continuous biomanufacturing. However, further advances in process optimization and automation are critical to realizing the ambitions of the bioprocessing 4.0 paradigm. By integrating upstream and downstream processes and ensuring that all equipment is utilized at all times, continuous bioprocessing can increase productivity in the manufacture of any biological products.

Along with higher productivity, continuous biomanufacturing leads to cost reductions on multiple fronts, including the size of equipment, the amount of reagents used, and the time to process.

For biopharma companies, this would mean the startups and smaller companies could produce their own drugs without having to rely on larger partners. It would also allow pharma companies to produce locally, close to where their products are needed. And for cultivated meat, the successful adoption of continuous cell culture might be a key step for achieving cost-parity with traditional meat production.