You have roughly 50% chance of developing a cancer in your life and 25% of dying from it. How to cure it? Biotech played and will continue to play an essential role in Cancer, ranging from monoclonal antibodies, immuno-oncology, CAR-T and everything in between.

Cancer is the degeneration of one type of cell within an organism into something anarchistically powerful, and nasty… As this new cell-form uncontrollably proliferates and embeds itself in a tissue host, a tumor is born. When tumor cells later spread, the prognosis for its victim rapidly diminishes, a process known as metastasis. Detected at an early stage, cancer can be benign and solvable…but once metastases appear the challenge becomes a whole new (depressingly difficult) ball-game.

The “traditional” ways to tackle cancer are chemotherapy (‘chemo’) and radiotherapy.  One big problem with these techniques, is the lack of specificity as chemo and radiotherapies are targeting cancer cells, but also healthy cells. 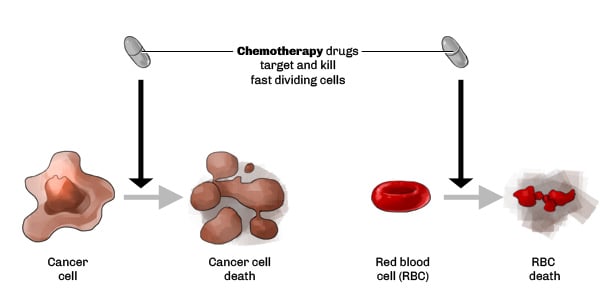 So, how do you improve drug specificity? You got it, monoclonal antibodies (aka mAbs), which were discovered in 1975 in the UK. Antibodies rapidly took off as a whole new approach for fighting cancer.

Monoclonal antibodies: How biological gets the ascendant on chemical’s accuracy

The first monoclonal antibody used for cancer purpose was invented in 1983 to treat a patient with non-Hodgkin’s lymphoma. Back then, having good results for your primary efficacy wasn’t enough to negate all the adverse effects and limits of the therapy. However, since then the field has rapidly improved.

A good example of mAb success is Herceptin. One study published in the European Journal of Cancer detailed a clinical trial at Barcelona’s Vall d’Hebron University Hospital (Spain), where 25% of patients treated with Herceptin went into complete remission as opposed to the 5% of patients in the control group. One reason behind the efficiency and stark results in the trial is the use of a biomarker to better segment the population of breast cancer patients.

The biomarker, human epidermal growth factor receptor 2 (HER2) is an oncogene, of which overexpression occurs in around 15-30% of breast cancers. Essentially, segregation of a trial group based on the presence of this particular biomarker was the beginning of ‘personalized treatments‘ in Oncology. This strategy is also referred to as being ‘theranostic’: One biomarker (HER2), one device to detect the biomarker and one tailored treatment (Herceptin).

However, monoclonal antibodies are similar to chemotherapy in the respect they only act on a single target. And because cancer cells are so versatile, as soon as one path is inhibited another one simply takes its place. To answer this problem, multi-target strategies have been developed instead. Bi-specific antibodies have one body, but can form ligands with two different target sites. First described in 1983, there are currently only two bi-specific antibody therapies that are available, yet more than a 100 exist in current pipelines (one recent example being the ‘TandAbs’ of Affimed). Another strategy is the combination of two antibodies to work together (e.g. BMS and its new combination – Nivolomab and Ipilimumab – approved by the FDA in the late September 2015 for treatment of patients with BRAF V600 wild-type or metastatic melanoma).

This is Immuno-oncology baby!

It’s the new way to treat cancer: Instead of targeting the tumor itself, immuno-therapies act on the body’s own immune system (IS), enabling it to recognize a tumor for destruction. They also provide ‘long-lasting memories’ to the IS, to repeat the appropriate immune response and reduce the risk of relapsing should the same cancer come back. There is a useful introduction to Immuno-oncology in this leaflet from the ECPC here.

Monoclonal antibodies have already significantly impacted cancer treatments, but it’s not the only method of attack…

Cell therapy can be defined as the use of a whole cell as a ‘drug’, as opposed to small-molecules or antibodies. Currently there are only few indications validated worldwide, and they vary greatly from one country to another. However, in the last decade, hematopoietic stem cells have even been used (undifferentiated blood cells from bone marrow).

A standard procedure to treat blood cancer consists in taking healthy blood stem cells from bone marrow first for modification. Chemo is then used to blast the immune system, killing off all cancerous and healthy cells. Once this is done, the stem-cells from bone marrow samples are grafted into the patient to try and replenish the system. This strategy isn’t exactly brand new; the first successful bone marrow transplant was performed in 1968 by the late Robert Good (the founder of modern Immunology)!  But this is only a solution for a specific type of cancer (blood)…and there are so many types out there. And as with every medicine, there are limits and risk of severe adverse effects.

Gene Therapy: Reprogramming a virus as an anti-cancer agent

A third strategy developed by the biotech field is Gene Therapy. It can be defined as the using of specific  nucleic acids sequences that once vectorized (inserted into a transporter) and delivered to the target cells in the patient, will be inserted into the cells genome and expressed as any other gene might. In doing so, the gene can be used to activate a certain signaling path, or be translated as a protein with many applications.

Two mains types of vectors for gene-therapies exist. One uses viruses, such as Adenovirus (chosen for their ease of manipulation), and the other a range of non-viral micro-particles such as Lipofectamine (a type of liposome which can freely pass through the cell membrane and deliver the target gene, which is inserted into a bacterial plasmid).

Several strategies have been developed with viruses to treat cancer, here are two interesting examples:

Currently, there is not the same kind of plethora of treatments available in Gene Therapy as there is with mAbs. The main reason here is the stigma associated with using gene-editing techniques in humans – particularly with viruses (which everyone is afraid will result in the ‘28 days later‘). As a result there are many regulatory issues and extremely stringent safety requirements. Nevertheless, gene therapy is very promising.

CAR-T – The Ultimate Therapy: A mix between Cell therapy, Gene therapy and Immuno-oncology

Chimeric Antigen Receptor T Cell (CAR-T) Immunotherapy: you may have already read up on it at Labiotech…in part because it’s such a major developmental area for Oncology research.

It works by triggering the immune system to recognize tumors and thus activate cancer cell lysis. In brief, you take the patient/donor T-cell, and then you modify it genetically in vitro to express a CAR (Chimeric Antigen Receptor) that recognize a specific tumor’s antigen.
Currently several trials are undergoing, one among other attempt to treat the Acute Lymphatic Leukemia by targeting CD19 antigen. One example is that by Autolus (a spin-off biotech from the University College of London):

The first proof using CAR-T however has already been achieved by Novartis and the University of Pennsylvania. Targeting the cancerous B cells in leukemia, up to 3 of the 14 patients in the trial went into complete remission, with one remaining cancer-free for over 5 years (and counting!).

So…the 4 major advantages of CAR-T are:

However, the cost of production remains really expensive because of a manufacturing process yet to be mastered and standardized.

One way to overcome this challenge, as French Billion-euro Biotech Cellectis is doing, is to use allogeneic CAR-T cells. By using nucleases (gene-cutting enzymes) the genes responsible for immunological rejection of surgeries in graft vs. host reactions (as well as host vs. graft) are therefore not possible.

This progress has allowed the industrialization of the process to an extent – i.e. compared to the expensive and time-laborious task of creating one batch per patient (autogenic graft), medics can now create one batch for several patients (allogenic) without the risk of rejection.

For the record, here are other companies that also develop CAR-T: Theravectys, Kite Pharma, Juno therapeutics.

You want some more?

CAR is not the only receptor that is expressed on therapeutic T-Cells. Indeed, Kite Pharma is re-directing T-Cell against cancerous targets through genetic engineering of designer T-cell receptors (TCR) that recognize antigens whether inside or outside of the cell. Clinical efficacy in solid tumors and some blood malignancies has been demonstrated already…
Immunocore and Adaptimmune are also doing TCR, leading to the biggest private biotech fundraising in the EU ever (€300M!).

We saw that biotech drugs fight cancer in a better way than classical chemical drugs do. As a matter of proof, biotech target cancer cells far more precisely and with less overall damage than in traditional chemotherapies. It also uses the immune system to block cancer from relapsing in the future, and so this strategy enables more of a prophylactic treatment rather than just a toxic curative.

But these new treatments remain hard to master and their extremely high prices cause reimbursement challenges for healthcare systems (particularly in the case of the UK’s NHS). The future of cancer treatments will therefore remain of utmost interest to the biotech industry as the levels of personalization, accuracy and efficiency of these treatments continues to improve.

New very promising solutions are in various well-funded pipelines and should arrive on the market soon.