Efforts to treat Alzheimer’s Disease have been hit with failure after failure in the last year or so. Andrea Pfeifer, co-founder and CEO of AC Immune, told me about how her company hopes to pull off a win.

Andrea Pfeifer started out as toxicologist in oncology before she moved into entrepreneurship. She left Germany after her PhD at the University of Würzburg for a postdoc at the NIH, but moved back for personal reasons. : “It was by pure chance that I ended up in Nestlé for two years, which turned into sixteen years,” she told me.

At Nestlé, she headed Global Research in Switzerland, managed more than 600 people and raised €100M to co-found the company’s venture capital fund for life sciences. Pfeifer described the role as “internal entrepreneurship,” such that it didn’t seem like a huge change to move into a biotech startup. Pfeifer left Nestlé because she saw the opportunity to help people even more than through Nestlé when she met the founders of AC Immune, where she found her place as a co-founding CEO.

Since the company was founded in 2003, the field of neurodegenerative disease has taken off, though Alzheimer’s Disease, on which AC Immune focuses, has taken some notable hits in the past year: Both Eli Lilly and Merck suffered late-stage efficacy failures, and Merck’s candidate presented some serious side effects, as seems to be the case for drugs inhibiting β-secretase. Most recently, Axovant’s abject efficacy failure became the latest blowout despite high hopes and confidence in its founder, the famed Vivek Ramaswamy.

Efforts to treat Alzheimer’s Disease are grounded in one of two theories, that the pathology is driven by plaques of amyloid-beta (Aβ) proteins or bundles of their tau counterparts. Until now, the majority of treatments to enter the clinic have targeted Aβ plaques, but the case for aiming for tau in addition to or instead of these is increasingly gaining traction.

AC Immune is one of the few companies with a drug targeting tau bundles, and not to mention one of the few with programs in both tau and Aβ. Its lead candidate is crenezumab, which has made it as far as Phase III for Alzheimer’s treatment and Phase II for prevention in partnership with Genentech/Roche. The company has other antibodies and vaccines for Alzheimer’s, in addition to various other diseases.

I sat down with co-founder and CEO Andrea Pfeifer to talk about drug development for Alzheimer’s Disease and what has made it a graveyard for biotechs. 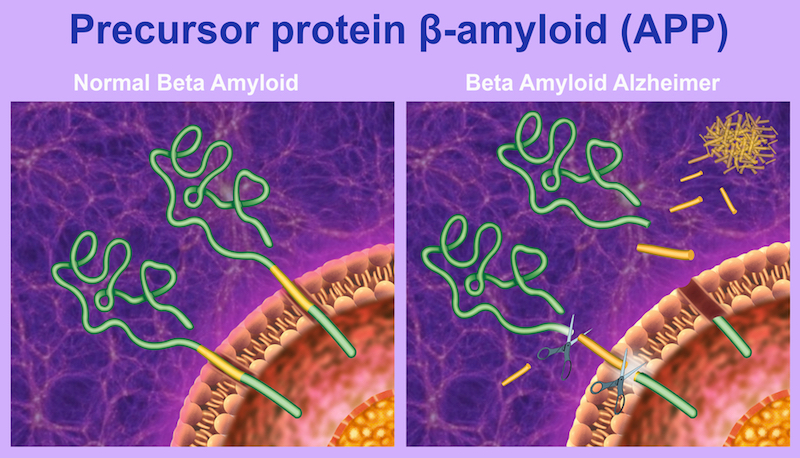 You really dove into the deep end by taking on Alzheimer’s Disease right away. Why did you go for it?

When I met the scientific founders, they were interested in working on prions — at that time it was a very big topic — and they were looking for people with my experience. My contribution was to focus the company towards Alzheimer’s.

I was under the impression — wrongly so, in retrospect — that there had been so much progress in cancer that I wasn’t needed. I was always thinking, “they don’t need me.” Because of that, I thought that I would dedicate my scientific and entrepreneurial knowledge to help in Alzheimer’s. This is still my motivation.

What excited you about joining the company? What was it about the technology that drew you in?

The SupraAntigen and Morphomer platforms produce highly specific antibodies, vaccines and small molecules that bind to misfolded proteins. These proteins are difficult to target because they are still recognized as the body’s own proteins, even though they are harmful. The line between harmful and benign comes down to a conformational change in protein structure that adds another level of complexity to the challenge of hitting a target.

Also, our scientific founders were very established, and they were all very successful in initiating products — they were scientists, but they also had a lot of entrepreneurial spirit. 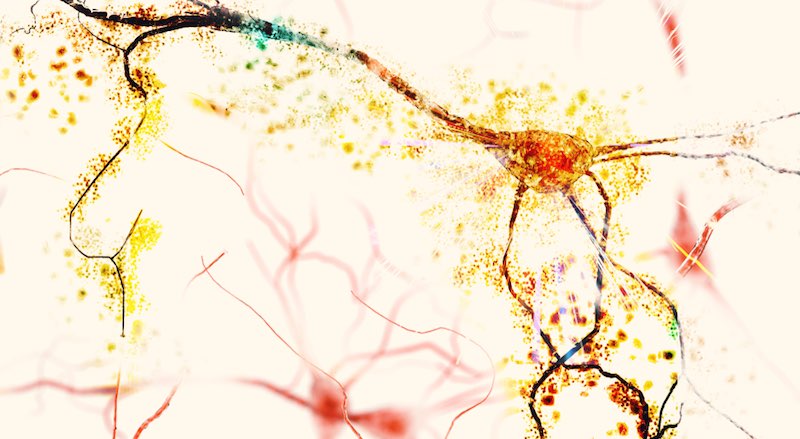 What do you think makes Alzheimer’s so challenging?

One of the three pillars of our R&D strategy is biomarker development, because this allows you to select patients and follow their treatments. I think that in areas where we don’t yet have a treatment, it’s exactly because of a lack of diagnostic.

When we entered the field, it was clear to us that we needed a safe and pathological protein-specific antibody for efficacious treatment. Aβ plaques and tau bundles occur normally in the body, and it’s by a still unknown mechanism that these proteins change their structure and conformation to become pathological.

At this point, they can aggregate to form the fibers that are hallmarks of Alzheimer’s. We were extremely lucky that crenezumab is particularly sensitive to structures called oligomers, the most toxic subunits of the pathological proteins. These are what really kill neurons when you put them together, and crenezumab has a really high affinity for them.

At the time we started developing crenezumab, oligomers hadn’t reproducibly been isolated, but with a little bit of luck, we got things right. For tau, it’s much more complicated because there are many subtypes, and we have to make sure that we’re binding them all. We did a long selection process for this. 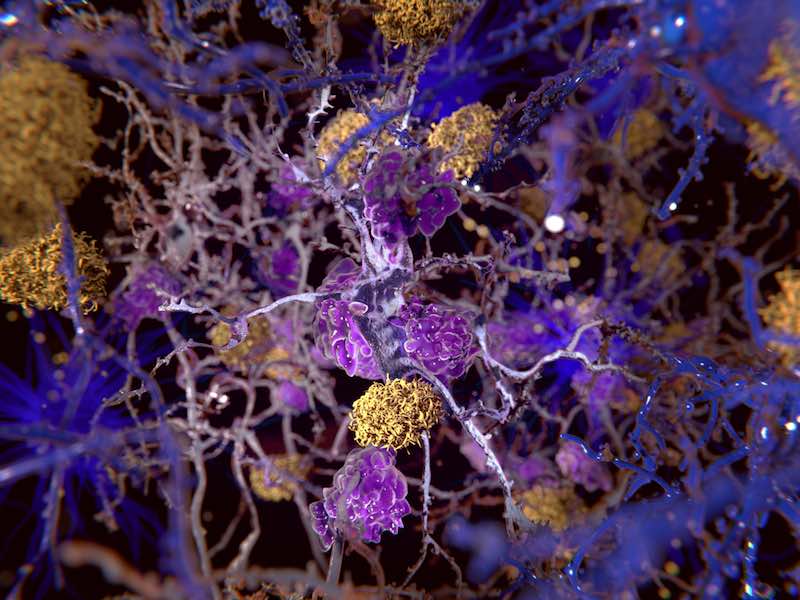 When we started the company in 2003, there were about 23 antibodies against Aβ in development, so we were definitely late; but now there are only two left in late stage Phase III clinical development, aducanumab from Biogen and crenezumab from us. The really challenging thing is that we don’t know how much we actually need in the brain in order to really have an effect.

Today, between 1 and 5% of what you find in the plasma goes into the brain. It’s a low concentration, but people showed that this concentration is actually enough to actually have the antibody act. You need to have this concentration to be effective, and it’s probably related to equilibrium so that the microglia absorb it and activate the complex.

The reason why crenezumab is given in such a high amount – 60 milligrams per kilogram – is of course linked to this. The studies showed that even 15 mg has an effect, but the higher the better the percentage that goes into the brain. In a way, we’ve solved the problem, but the biggest challenge in developing an Alzheimer’s drug is perhaps delivering drugs in a high enough quantity to the brain.

How do you select patients and design a clinical trial for such a long-term disease?

We pre-select the patients for Aβ positivity using Aβ imaging; more and more we use tau imaging as well, using a PET imaging agent we developed. Studies are increasingly done in patients who have Aβ plaques and cognitive impairment, but not yet any clinical symptoms. We want to go as early as possible, and it’s very important. It’s even more essential to find the right population with biomarkers before you start. 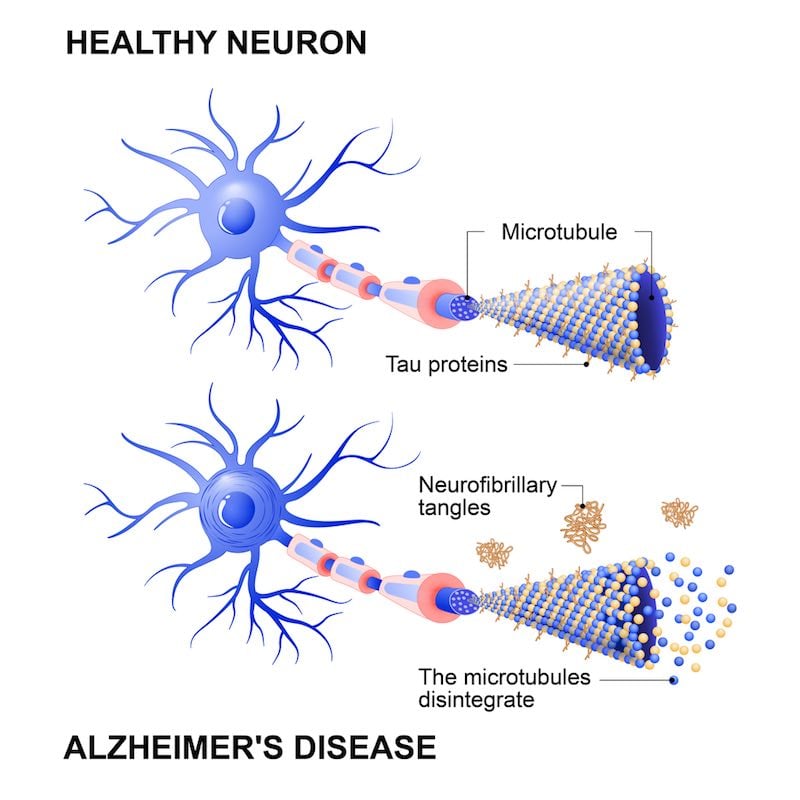 How would you characterize the roles of A-beta and tau proteins?

Tau in Alzheimer’s is often described as an Aβ-mediated tauopathy, meaning it works well as a predictor. AC Immune started its first program in 2007, and in 2012 we made the first deal. It wasn’t really known how an antibody could treat tau until a year or so before that, and now it’s known with certainty that tau can infect cells in a prion-like way. Companies now choose their assets based on whether or not they can inhibit that spreading.

Aβ came first because genetically it’s very strongly linked to Alzheimer’s, so it’s probably the starter while tau is the spreader.

Last question, have you been frustrated with respect to gender diversity in biotech?

In my generation it was difficult. I think I was the first female head of research at Nestle; I was effectively the exception, and it is still is that way. Even today, when I go to award events I’m sometimes really shocked when no women are even nominated. On the other hand, I’m very proud that at AC Immune over 60% of our staff are women.

I think there are two important factors to increase their presence. First, when you’re looking for the right profile and looking for the absolute best fit, you have to look very carefully at female applications. The second is natural: Women look up to me and see that they can do what I’ve done, and it really motivates them to have the same goals. I’m now coaching some of them a little bit to make it a bit easier than it was for me.

The women at our company have big careers ahead of them, and we support them with for example sometimes working at home to make childcare easier. Gender diversity is definitely an issue in Switzerland, a bit more than in America, but when I go to CEO workshops I can assure you that I’m very often not the only woman.

So can we change it? Yes, I think we can and by giving a good example, which is what I’m trying to do. This issue is very close to my heart.