A group of researchers in Spain has developed a silk biomaterial that can increase the survival of transplanted stem cells into the brain, improving recovery after a stroke or brain injury.

The nervous system has limited capacity to recover after an injury, such as those produced by a stroke or brain trauma. Stem cell transplants are a promising therapy to promote regeneration of the brain by reducing the extent of the damage and promoting the remodeling of the brain. However, most of the cells don’t survive the procedure due to the inflammatory environment created in the brain after an injury.

A study has shown that encapsulating stem cells into a biomaterial containing silk proteins could protect the cells and make them last significantly longer when treating stroke in mice.

“In many cell therapy studies, most of the mesenchymal stem cells implanted don’t survive beyond 1-2 weeks after the implantation,” Daniel Gonzalez-Nieto, researcher at the Polytechnic University of Madrid (UPM), told me. “In this study we found that our biomaterial increases the survival of these cells in the brain to over 4 weeks.”

With more cells surviving the procedure, the mice recovered better. “The changes were extraordinary, the treatment improved the sensory and movement ability of the animals that had suffered a stroke,” said Gonzalez-Nieto.

The encapsulated stem cells were able to reduce the size of the lesion and promote the remodeling of the brain areas adjacent to the injury, making the neurons take over control of the functions that were lost after the stroke.

“This remodeling around the lesion has been observed in patients that improve after a stroke or some type of brain trauma,” explained Gonzalez-Nieto. “These patients are a minority and they get better because the damaged area is smaller and respond relatively better to physical rehabilitation.” 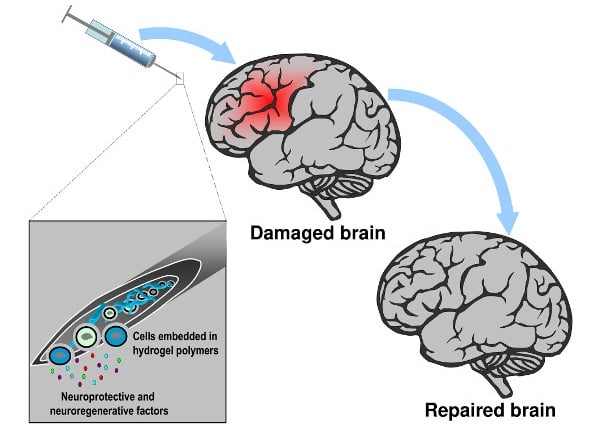 The biomaterial consists of a hydrogel containing silk fibroin, a protein that the researchers extracted from the silk of the cocoons of the silkworm. According to Gonzalez-Nieto, the material has been used for decades in medical practice for applications such as wound stitching.

Compared to other biomaterials, silk fibroin does not generate any immune response against it. In addition, silk fibroin doesn’t produce any toxic by-products when it degrades, as is the case with hyaluronic acid, a biomaterial commonly used in research to encapsulate cells and drugs.

The goal now is to get the biomaterial ready to start clinical trials in humans in collaboration with Silk Biomed. A spin-off of the UPM, the company was founded in 2016 with a €1M grant with the goal of developing clinical applications for this biomaterials.

“Before starting clinical trials we need to determine the optimal time point to administer the therapy and the number of cells needed to maximize the beneficial effects of the therapy. We’re running different tests in vitro and in vivo and we expect that in 2019 we’ll be able to obtain a pharmaceutical product that is safe and suitable to treat brain injury,” Fivos Panetsos, co-founder and CEO of Silk Biomed, told me.

The applications of this silk biomaterial go beyond stroke and brain injury. Panetsos explained that the company is also looking into developing and testing biomaterials for neurodegenerative diseases such as Parkinson’s and Alzheimer’s, eye diseases like glaucoma and age-related macular degeneration, the repair of skin and tendons, and the treatment of incontinence and impotence caused by prostate surgery.