Are fully human antibodies the new gold standard in therapeutic innovation? If you want to upgrade, here’s where to find them.

If you’re curious about the future of antibody development, look no further than Humira. This monoclonal antibody (mAb) for various inflammatory diseases soared to become the best-selling biological in 2016. Humira is a fully human mAb that was discovered with phage display technology and became the first of its kind on the therapeutic market.

It is undeniable that fully human antibodies are the future of innovation in antibody-based therapies. A full 75% of the new generation of mAb drugs is human, and the remainder are humanized – no chimeric or rodent antibodies are currently in the pipeline.

Humanized mAbs are antibodies isolated from non-human species that have been modified to be more similar to those produced naturally in humans. They have been popular for their accessibility from animal immunizations, but they can’t top the quality of their fully human counterparts.

Perhaps as a reflection of their inferiority, two of the 26 approved humanized antibodies have been withdrawn. As it stands, 50% of the available antibodies are humanized while 30% are “fully human”; by the end of 2017, human antibodies are expected to catch up, with in total reaching up to 40% of the market.

Yumab was founded with the purpose to help clients achieving the gold-standard fully human antibodies for top-quality therapeutics. Founded in 2012 as a spin-off from University of Braunschweig, the company provides antibody discovery using the well established phage display technology.

This targeted in vitro selection via phage display allows for significant candidate identification; indeed, at least two thirds of all commercialized antibodies are based on this technology.

Phage display is a method of studying molecular interactions between proteins, as well as peptides, using bacteriophage. The gene for the protein of interest is fused to a phage coat protein gene, which results in the ‘display’ of this protein on the phage’s surface. This enables the protein of interest, e.g. an antibody, to interact with another binding partner, e.g. a certain target antigen. Subsequently, its binding activity can be analyzed or more importantly, its “blueprint” in form of its genetic code (DNA) can be isolated from a vast mixture of other antibodies in the library.

With this highly efficient means of screening proteins for various properties, Yumab can sort through its expansive libraries of fully human antibodies to identify the best candidates for drug development. The company counts with billions of naturally human antibodies within its universal antibody libraries. 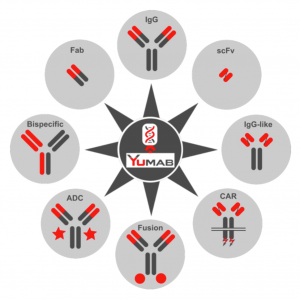 Within six weeks, Yumab can sort through billions of candidates to obtain between 10 and 1000 hits with close-to-germline sequences. The antibody selection can cover a huge range of epitopes including “difficult” targets like GPCRs and ion channels.

Over the course of four to six months, these hits can be further refined to one to three lead candidates after extensive analysis and validation. Antibodies with special capabilities can be selected for further development.

For example, Yumab can identify interspecies cross-reactive antibodies that are effective for the same target in mice, monkeys and humans. In this way the same antibody can be studied in preclinical mouse and/or macaque models, an absolute requirement for some indications like those in immuno-oncology. Antibodies can also be engineered for a variety of different applications, whether it’s antibody drug conjugates (ADCs), chimeric antigen receptor T cells (CAR-T) or even bispecific antibodies.

The development of Yumab antibodies to clinical drug candidates is much easier than existing methods, because they are closer to human germline and are therefore less immunogenic. That means these antibodies need little to no changes; but if they are necessary, they can be done efficiently by rational design in combination with in vitro evolution. The avoidance of synthetic or semi-synthetic sequences in human mAb drugs reduces the risk caused by immunogenic adverse effects.

If you’re looking for a top-notch antibody for therapeutic development or just want to find out more, head over to Yumab’s website for more information!