Jonathan Frampton, Corporate Development Partner at Horizon Discovery, a Perkin Elmer company, shares his insights into the promises of base editing technology.

In less than a decade, the advent of CRISPR-Cas9 has made gene editing easier and faster than ever. But CRISPR, as well as earlier genome editing tools, have a series of technical limitations, especially when it comes to making very small modifications in the genome — of as little as one nucleotide base within a DNA chain.

Base editors have emerged as a technology that enables precise single base pair changes, and therefore has a host of potential clinical utilities. We asked Jonathan Frampton, Corporate Development Partner at the cell-engineering company Horizon Discovery, how base editing compares to traditional genome editing, its limitations, and why it is such an exciting approach for cell-based therapies.

How does base editing compare to other genome editing tools?

Base editing is a novel technology that has the potential to generate gene knockouts or to correct certain errors or mutations in the DNA of intact cells.

Most pathogenic mutations that cause human disease are single nucleotide polymorphisms that only require a single nucleotide change to correct the mutation. Before base editors, correction of these types of mutations required replacement of the mutated DNA using a template of exogenous DNA along with the introduction of DNA double-strand breaks using nuclease-based technologies, such as CRISPR, ZFNs, or TALENs.

Although these approaches can be precise, their success is low to non-existent in cells isolated from patients. Building cell-based therapeutics that can aid the treatment of patients with solid tumors, for example, is anticipated to require five to ten gene-editing events to generate a persistent primary cell capable of surviving in an immunosuppressive tumor microenvironment. Although CRISPR, ZFNs, or TALENs can achieve this number of gene knockouts, they do this through the introduction of double-strand breaks, which is less than ideal.

The introduction of multiple double-strand breaks simultaneously within the genome via CRISPR or other tools carries the risk that the edited cells’ intrinsic DNA repair systems will make mistakes, introducing changes into the genome that could lead to cellular transformation and cancer.

Base editing does not need to introduce double strand breaks to modify a base pair, so the chance of large alterations in the genome, such as chromosomal translocations, is substantially reduced. This offers a very attractive safety profile as the gene editor of choice for cell therapy.

What are the main limitations of base editing?

Base editing is a new technology, so we are still learning about its capabilities and challenges.

Another hurdle is the capacity for off-target base pair changes elsewhere in the DNA or RNA, as some base editors can also target RNA. Some of these less desirable effects seem to be initial teething troubles as a result of prolonged or overexpression of the base editor, a situation that should be avoidable with transient expression systems that will be needed for the clinical application of base editors.

Who is developing base editing technologies?

The principle of base editing has been described by several academic groups, including that of David Liu at Harvard University. This system, where the base editor is fused to a nickase version of Cas9 is being widely used in academia and also forms the basis of cell-based therapeutics being developed by Beam Therapeutics in Boston, US.

The system that Horizon Discovery is developing is licensed from Rutgers University, US, and was developed in the laboratory of Shengkan Jin. This system differs from the David Liu base editing system in the way the deaminase is recruited to enact base-pair deamination.

The practical differences and similarities between the systems are yet to be fully understood. However, both systems can accurately knockout gene expression and there will likely be an overlap in applications.

In the future, we anticipate significant use of base editors in the evolution of the next generation of cell-based therapies. The reality is that significant engineering is required for cell therapy to reach its full potential, and we believe base editing will be a core component in realizing this. 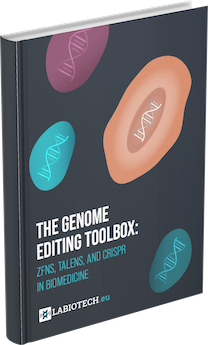 This interview is part of Labiotech’s report “The Genome Editing Toolbox: ZFNs, TALENs, and CRISPR in Biomedicine.”

Become a member to get full access to this and many other reports offering a deep insight into the hottest areas of the biotech industry.

Get the report
ADVERTISEMENT