CAR-T cells are all the rage as the latest treatment for cancer. But what if we could apply this same technology to treat autoimmune disease? Curious to learn whether this new technology could revolutionize yet another field of medicine, I talked to Stephane Boissel, CEO of TxCell, to discuss the future of the field and his company’s new take on CAR-T cell therapy.

CAR-T cells are changing the way cancer is treated, achieving huge remission rates in patients with severe forms of cancer. The gene editing technology saw its two first approvals last year, and more are definitely yet to come. Big pharma is already head over heels enthusiastic about CAR-T cells, especially with Gilead and Celgene recently spending over $20Bn combined to acquire two of the most advanced CAR-T companies.

But a company in France is starting to think ahead of all these big players. TxCell aims to be the first to expand the applications of CAR-T beyond cancer by using a special type of T cells known as regulatory T cells, or Treg cells for short. Unlike killer T cells used in CAR-T cell therapy, whose main function is attacking their target, regulatory T cells protect their target from being attacked by the immune system.

The engineered CAR-Treg cells that TxCell is developing could fight autoimmune disease, caused by excessive immune responses against the patient’s own body. The potential applications would range from transplant rejection to multiple sclerosis and lupus, for which effective treatment options are scarce. The CAR-T revolution might change yet another big field of medicine where new treatments are desperately needed.

But CAR-T cell therapy for cancer is not free of controversy. Concerns about severe side effects and pricing are spurring debate, so it might be early to say whether the technology is a complete success. And even earlier concerning any applications beyond cancer, which still haven’t been tested in humans. So I asked Stephane Boissel, CEO of TxCell, to give me his honest opinion about CAR-T from his vantage point of view, and to tell me more about the real potential of the new form of the technology his company is developing.

Let’s start talking about CAR-T cells for cancer; Would you say the field is hyped?

Well, we can no longer say it’s hyped. Two products are already available in the US and two acquisitions worth more than $20Bn were closed recently in the space. So, the question should be: are those valuations justified? Isn’t it too early? And, what is the real market potential?

Kite and Juno are very young companies, but the buyers are far from stupid: they bought something concrete. I don’t believe that Gilead and Celgene, which are among the best-managed companies in the biotech and pharma world, have paid these prices to only use a technology in the two or three hematological disorders that they are targeting currently. At the end of the day, it is a relatively small patient population. But if this technology can be applied beyond that, the market potential is huge, and then the valuations are fair. 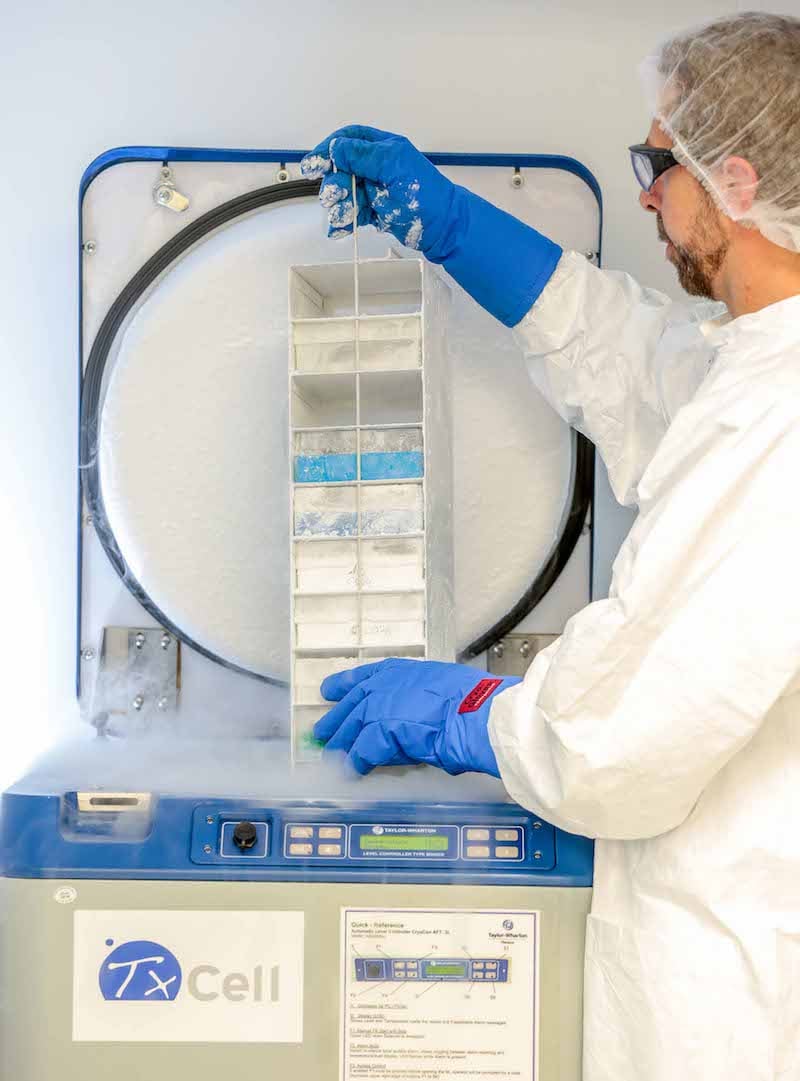 And how does your CAR-Treg technology compare to CAR-T cells for cancer?

The manufacturing process is very similar. We start from a leukapheresis, we isolate the right cells, we insert the CAR into selected cells, we amplify the CAR-Treg cells, then we cryopreserve and ship them to the hospital. From a regulatory viewpoint, although it’s very early to say, we expect that our product will be treated the same as CAR-T. It’s a gene therapy in the end.

The main difference with other CAR-T cells is that we are not starting from the same T cell variant. And, of course, we are not inserting the same CAR as other CAR-T players.

In our case, the antigens that we target are not necessarily associated with the disease. What is important is that they are located, as specifically as possible, in the tissue whose inflammation you want to fight. For example, if you have multiple sclerosis, that the antigen is specifically present in the brain. If you have Crohn’s disease, the antigen has to be in the guts. In fact, given the large number of relevant antigens, we believe our technology has possibly a larger potential than CAR-T cell therapy in oncology.

One of the main features of regulatory T cells is the fact that they are naturally attracted by inflammation. So if you have rheumatoid arthritis and we inject Treg cells, they will migrate through the blood to the site of inflammation, to the joints. Once there, the CAR will recognize the antigen, bind to it and activate the Treg cells.

On paper, that’s a very powerful, very directed, very targeted kind of therapy. Again, we have to be cautious, but if it works, there is a very large panel of diseases we can potentially target. We are sitting on a very large business opportunity.

How big is this potential?

If you combine all autoimmune disorders – multiple sclerosis, Crohn’s, rheumatoid arthritis, type 1 diabetes, lupus and a hundred more – the field of autoimmune disease is probably the largest pharmaceutical market in the world. The best-selling drug in the world today is Humira, approved in half a dozen different autoimmune diseases and generating more than $15Bn annually.

But a major part, if not all of the therapies in this field only control inflammatory symptoms. There is not yet, on this very large market, a single therapeutic option to cure the patient through. In principle, with a technology that can induce tolerance, these diseases will no longer require chronic treatments. We could see the end of lifelong therapies for autoimmune diseases.

CAR-Treg cells are not the only option, but it is a possible one. It’s way too early for me to say whether that’s what we will achieve, but that is what we want. 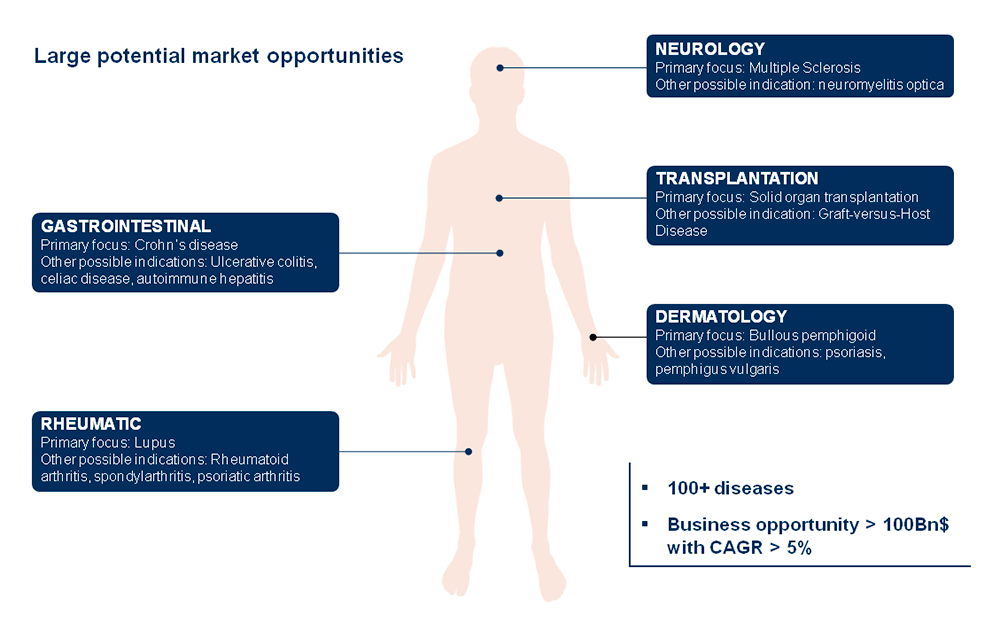 And how did TxCell come up with this CAR-Treg technology?

Well, for the first 15 years the company focused on the development of what we call “naturally antigen-specific regulatory T cells.” Although this technology seemed to work in the clinic, we realized that it was going to be difficult to make it a viable business. Those cells were difficult to manufacture in large quantities with the process we had.

Hence, in 2016 we decided to no longer only rely on Mother Nature, but to use modern tools, namely CARs – chimeric antigen receptors – to make those cells antigen-specific. Basically, we moved from the first generation of technology, in which the cells were antigen-specific but not genetically modified, to a new generation, in which the antigen specificity is introduced via the construction of the CAR in those Treg cells. 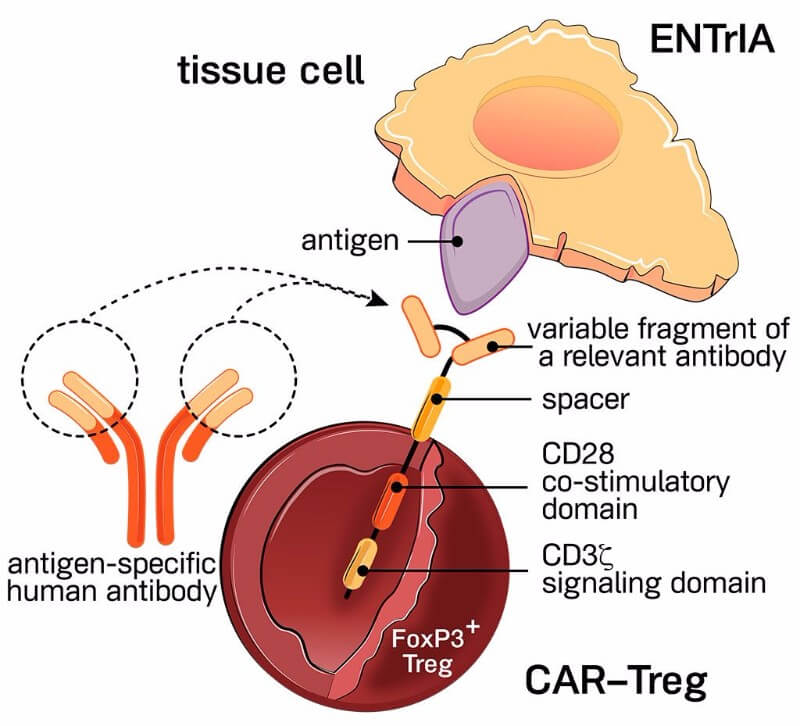 This has never been done in the past. We started two years ago, and if you looked at the literature then, there probably were two or three academic papers with somewhat of a proof of concept. So we took a huge bet – as always in biotech.

Since we took that decision, we have proved the concept in animals, and we’ve managed to develop a robust, scalable, cost-effective manufacturing process. The next step for us is to start clinical development, which we expect to start before the end of the year.

So, will this be the first time CAR-Treg cells are tested in humans?

First time ever! You can look anywhere in the world, even in China, where a lot of innovation is taking place now. No one has ever done it.

Well, that’s the key question. Regulatory T cells were discovered quite recently, in the mid-90s. Something like 30 or 40 years after killer T cells were characterized. 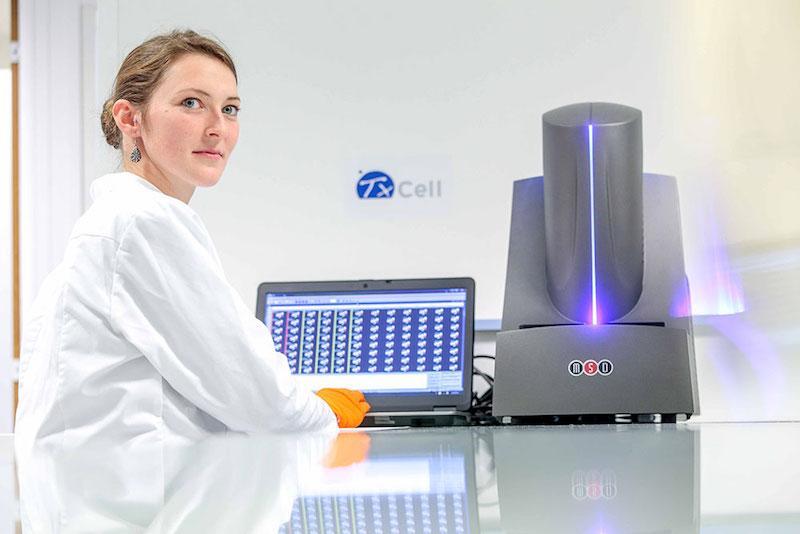 Because of the absence of clinical efficacy demonstrations, the industry has not considered using regulatory T cells a credible therapeutic option until really recently. The situation is changing now, as preclinical data is accumulating. Over the last 12 months, there have been 5 or 6 deals involving industry players on Treg technology.

Importantly, not a single one of those deals was on technology similar to what TxCell is doing. We believe we are the only company in the world to be focusing exclusively on inserting CARs into Treg cells.

How are you planning to fight the competition?

What I tell the shareholders is: “look, if we don’t have the appropriate level of resources to develop this technology rapidly, I’m not sure it’s worth the fight.” Because sooner or later, all these big names will come after us, as regulatory T cells would be a very logical next step to the CAR-T technology.

Today, we believe to have a 2- to 3-year first mover advantage. And the good thing is CAR-T players are all focused right now on trying to capture a share of the oncology market. So we have a perfect momentum.

But if we don’t go fast enough, we might lose this advantage to a deeper-pocketed player. That’s the way things go in our industry, which is paved with examples of a first mover finishing second or never even finishing the race. I don’t want TxCell to end up in such situation.

So we are pragmatic. If we cannot find rapidly – and when I say “rapid,” it’s 2018 – enough money to make sure we keep our first mover advantage by investing in clinical validation and in new technologies – CRISPR for instance – in the next 2 to 3 years, and someone knocks at the door to buy TxCell out in order to give justice to our project by investing significantly in it, then why not?