The Danish artist Jacob Remin explores how biotech might be essential if we want to keep building smartphones and laptops.

Computers, tablets, phones, television screens… we take our electronic devices for granted. However, the rapidly increasing demand might not be possible to meet because of rare earth elements, a series of rare metals that are essential to building key parts for electronics.

In a recent exhibition at Overgarden in Copenhagen, Jacob Remin presented a fictional biotech company, Hybrid Ventures, that just 10 years from now could be using biomining in order to recycle these precious materials. “Harvesting the Rare Earth” is introduced with an imaginary investment pitch for the company outlining the company’s business plan.

The exhibition then continues with a series of prototypes of the company’s technology. In fact, Remin and his colleague Martin Malthe Borch, a Danish bioengineer, have worked out all the details of the science behind the fictional company. They have even published a report outlining the process, based on the current advances in biomining research.

The biomining process would start with a chemical to dissolve rare earths from e-waste, which would allow genetically-engineered fungi to feed on them. Then, modified butterfly larvae would eat the fungi and accumulate high amounts of these elements in their bodies. Once morphed, the insects would be collected by attracting them with ultraviolet light, and the precious metals harvested using an enzymatic solution to dissolve all organic matter. 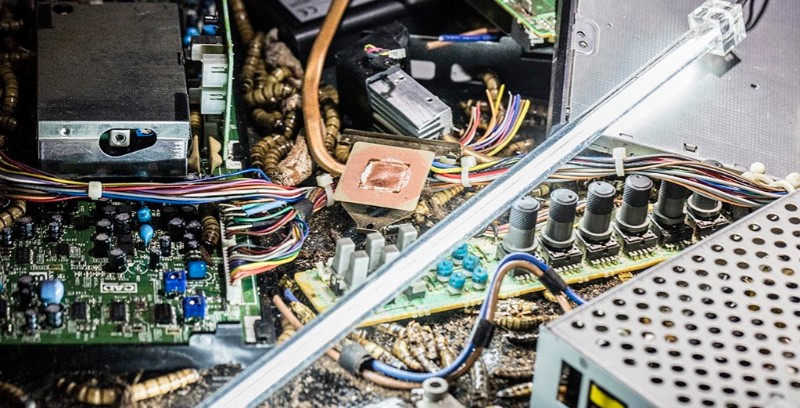 This futuristic scenario could not be so far from our future. Currently, recycling e-waste is expensive and dangerous, given the presence of toxic chemicals. Rare earth elements are obtained from open-put mining and generate massive environmental effects. Their scarcity is already driving political conflicts; since China dominates 97% of the production, the country has gained a huge influence over Western countries, which consume and throw away vast amounts of electronics every year.

Besides imagining a future where biomining makes the production of technology more sustainable, the artist also intends to question the addiction that these technologies have generated. To expose the visitors to the direct consequences of current practices of technology consumption, the exhibition features drone footage from Agbogbloshie in Ghana, the largest e-waste dumping site in the world.

Jacob Remin has traveled to Agbogbloshie himself to film the images shown in his exhibition. There, he discovered that not even locals knew of the existence of this huge dumpster, where children and young workers get cancer when trying to extract these valuable materials from the trash. As well as Remin’s fellow Danes, the locals are completely disconnected from the huge amounts of trash we generate and the consequences it has on the planet.

The future will surely bring new technologies to make the world better, but should we also review and update our own behavior as well, instead of relying on science to solve all of our problems?