The exhibition Nonhuman Networks at Art Laboratory Berlin invites us to connect with other organisms and rethink our relationship with the environment.

For those of us living in the Western world, our whole culture seems to revolve almost exclusively around ourselves. Despite having evolved within an ecosystem with a huge and fascinating diversity, we tend to relegate it to the background of our daily lives. But a group of artists and researchers have gathered at Art Laboratory Berlin to challenge this view and invite us to meet some of the fascinating creatures that share our planet.

When you enter the exhibition, called Nonhuman Networks, the first thing that attracts your attention is a white, egg-shaped pod sitting in the room. An opening in its side invites you to get inside and lay down. Once there, you plug a series of motor devices to your ankles, knees and elbows, attach a heartbeat sensor to your finger and wear a pair of headphones.

Looking up, you see a series of petri dishes where the mycelia, or roots, of an oyster mushroom are growing. As you look at them, your heartbeat is sent to the fungi in the form of electrical signals. The mycelium responds by changing the signal, which is translated into light, sound and vibrations into your body.

In turn, the response of your body, reflected in your heartbeat, changes the signal sent to the fungi, forming a sort of symbiosis between you and the mushroom. For a few minutes, you can feel it in your own skin, being alive and interacting with you.

The pod is called Myconnect, and its makers are Saša Spačal, Mirjan Švagelj and Anil Podgornik, a group of curious artists and scientists from Slovenia working at the intersection of both fields. “I invite people to connect with an organism that, though it’s fluffy and does not have pretty, big eyes, is alive,” says Saša Spačal. “To show the influence of the environment in the body.”

As Spačal explained to me, we are in fact not so different from the fungi in the petri dish. In the forest, fungi use mycelia to connect with the whole ecosystem, a process that’s required for its survival. The structure of its mycelia is actually very similar to that of our nervous system, which also relies on connections to keep us alive.

Stepping out of the pod, you meet another living being. Physarum polycephalum, also known as slime mold, is a bright yellow, single-cell microorganism with which artist Heather Barnett has been collaborating for the past 10 years. A series of audiovisual material explores the artist’s journey to understand a fascinating creature that can remember where it has been and find the shortest path to its destination without a nervous system.

“This very simple organism can demonstrate very complex collective behavior,” says Heather Barnett. “It can coordinate and distribute information across its entire structure and make quite complex decisions with no brain or internal hierarchy.”

By exposing visitors to time-lapse videos of how the slime mold grows and moves, whether in the search of food or trying to get away from another species of mold, Barnett introduces us to an organism that is completely different to us in many ways, but that, as a living being, also shares similarities. Her work, which also includes choreographies and workshops where people attempt to enact slime mold behaviours , invites us to reconsider our relationship with other organisms that, though many might initially dismiss as inferior to us, actually present complex and fascinating behaviors.

By introducing us to how these microorganisms perceive and interact with the world, Nonhuman Networks takes us out of our anthropocentric view of the world. “I want to encourage people to think differently about their environment, to, rather than think we are at the center and everything performs for us, recognize that we are also biological,” says Barnett. “Our intentions and motivations might not be that different from something that seems so alien to us.”

As both artists point out, we humans are the only species that is massively destroying its own habitat, and could actually take a lesson from fungi and mold. “We should look at them to learn how they live in their environment if we want to survive in this planet,” says Spačal. “It’s going too fast. We won’t survive if we don’t connect.”

Although, as Barnett says, art won’t save the planet, maybe next time you’re in the forest and encounter fungi or slime mold – they’re more common than you think – you might actually stop for a second to think about the world we share. 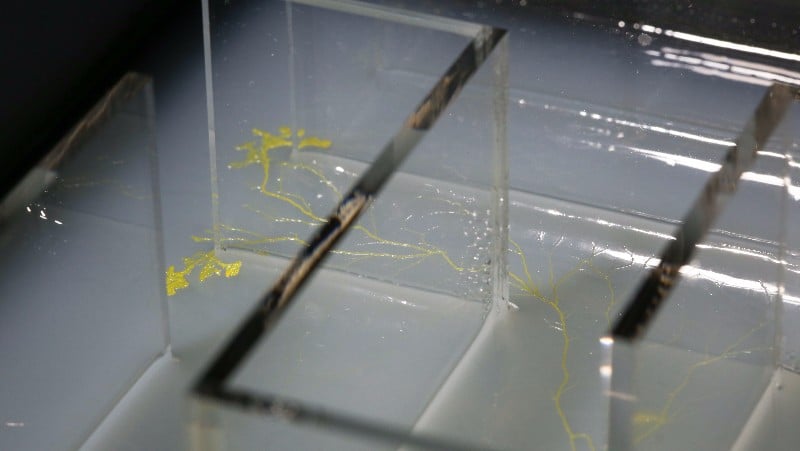 Nonhuman Networks is part of the series Nonhuman Agents by Art Laboratory Berlin. The exhibition will be on show until the 26th of November, and will conclude with an interdisciplinary conference gathering over 20 artists, researchers and philosophers, including Spačal and Barnett, that will discuss anthropocentrism through non-human points of view.