In the city of Jerusalem, eggXYt is developing gene edited chickens whose male chicks fluoresce inside the egg. This could prevent the suffering of billions of male chicks in the egg-production industry, which are currently culled after hatching. 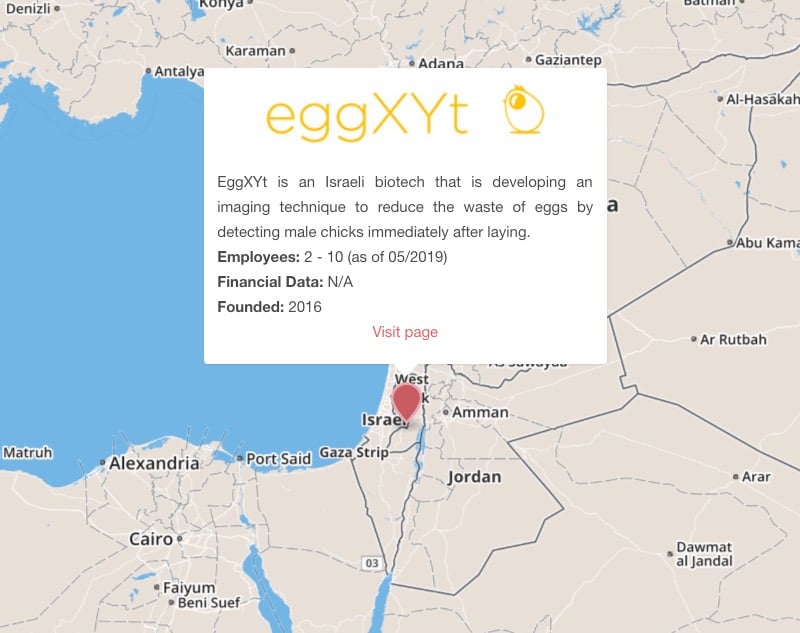 Mission: To develop a gene edited breed of chickens whose sex can be determined before hatching using fluorescence imaging.

Being born male in an egg farm is a bad start to life for a chicken. Naturally unable to lay eggs, the males are also unsuitable for rearing for meat, leading to the culling of seven billion chicks per year. “Fifty percent of the eggs, the male chicks, are immediately disposed of, wasting billions of dollars,” a representative from eggXYt told me. “This is a massive financial and ethical challenge.”

eggXYt’s solution for this challenge is to develop a new breed of egg-laying chickens. Genetically edited using the tool CRISPR-Cas9, these birds express a fluorescent marker on the sex chromosomes. When illuminated with a fluorescent light, the male embryos fluoresce, letting companies then dispose of the eggs immediately after laying. This step prevents animal suffering, and saves the costs and manual labor of sorting hatched chicks.

Founded in 2016, the company expects to have a commercialized product by 2022.

There is a big need for technology to screen the sex of unborn chicks. Eggs are not just important for food, but also for other industries such as additives in cosmetics and vaccine production in pharmaceuticals. Solutions such as eggXYt’s technology could therefore have a wide-ranging benefit for multiple industries.

There are other ways to screen unborn chicks in development. For example, the Dutch biotech In Ovo is developing a method to make a small hole in the egg and extract fluid for chemical analysis. However, this would take longer than eggXYt’s visual screening technology.

A research group at the University of Leipzig, Germany is developing a less invasive solution than In Ovo. The group scans blood vessels within the egg with infrared light spectrometry to measure the relative sizes of the chick’s sex chromosomes. The advantage of this technique is that it doesn’t require genetic engineering, which is tightly regulated in the EU.

The use of transgenic animals in the food industry is a controversial topic, particularly in the EU. According to eggXYt, this controversy could be solved as long as companies maintain trust with the consumer and regulators.

“The acceptance of promising innovations like gene editing is hinged on the responsible and accountable use of such new technologies,” the representative said. “eggXYt joins other scientists, regulators and food system stakeholders who are committed to engaging consumers and earning their trust.”