The biotech Atelerix, based in Newcastle, UK, can transport cell therapies between different locations with less cost and risk than current methods by encapsulating the cells in a specialized gel. 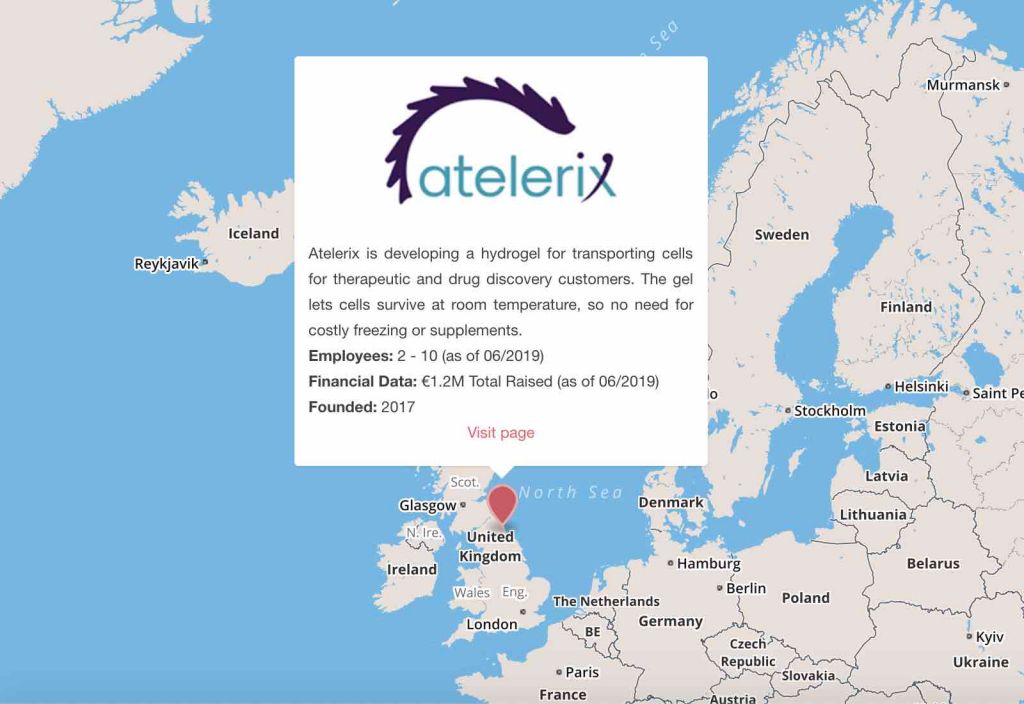 Mission: To eliminate the need for costly cold storage in the cell transport process by preserving cells in a gel. This could save further costs by reducing the amount of cells that die in transit.

Cell and gene therapies have big potential for treating diseases such as cancer and diabetes. Before they can meet this potential, however, the industry needs to overcome challenges with the production process, including transporting cells between research centers without the majority of the cells dying en route.

“The usual way to ship cells is frozen — either at liquid nitrogen temperatures or on dry ice — and this can be very harmful to cells,”  Mick McLean, CEO of Atelerix, told me. “As a general point, freezing and thawing cells isn’t good for them — some die, some change and you often don’t realize this has happened until it’s too late.”

Atelerix is developing a hydrogel made from alginate, a molecule derived from seaweed. The gel stabilizes the cell membrane, allowing the cells to hibernate at room temperature until they are ready for use. This eliminates the need for expensive cold storage in the transport process. According to McLean, the company’s name is derived from a genus of hedgehogs able to hibernate at a similar temperature to the cells, because “we thought it was a cool name for the company!”

Spun out from Newcastle University in 2017, Atelerix has raised €1.2M capital to fund the development of the gel technology.

Reducing the risks and costs of cell transport overcomes one of the key challenges of the cell and gene therapy industries, helping the treatments to reach the mainstream. This would then improve access for patients that need them the most.

The shipping costs of cell and gene therapies are critical for making the treatment profitable. “For those cell therapies that can’t be frozen, but have short shelf lives, it will be necessary to build multiple … manufacturing and processing facilities to reach customers spread over different territories,” McLean commented. “This will involve high capital and infrastructure costs which will need to be recouped from the sale price of the therapy.”

A key example of this challenge is Strimvelis, an ex-vivo stem cell gene therapy developed by GSK for the treatment of the rare disease ADA-SCID. Although the treatment was approved in 2016, the high price and difficult logistics of getting the cells to patients hurt the profitability of the treatment, leading GSK to sell Strimvelis to UK Orchard Therapeutics last year.

Encapsulating cells in protective gels could be key to overcoming more than just transport challenges. One of Atelerix’s competitors, the French biotech TreeFrog Therapeutics, for example, encapsulates cells in alginate to increase the yield from automated manufacturing processes, as well as improve the transport of the cells. Unlike Atelerix’s technology, however, the cells still require cold storage in transit.