While we mostly think of disease as being caused by bacteria or viruses, an illness can often occur when the body’s own defenses turn against itself. Here we’ll take a look at seven rare autoimmune diseases you may not have heard of and what biotechs are doing to treat them.

The body’s immune system can be equally as toxic to foreign organisms as it can to its own tissues. A hyperactive immune system can wreak havoc on the body, with patients often afflicted by more than one autoimmune disease at once.

We discuss many well-known rare autoimmune diseases on a regular basis, such as multiple sclerosis, which results from an immune attack on the myelin sheath of nerve cells; type 1 diabetes, where the immune system destroys insulin-producing pancreatic cells; rheumatoid arthritis, in which the joints suffer from inflammation; and lupus, when the whole body is under attack from the immune system. 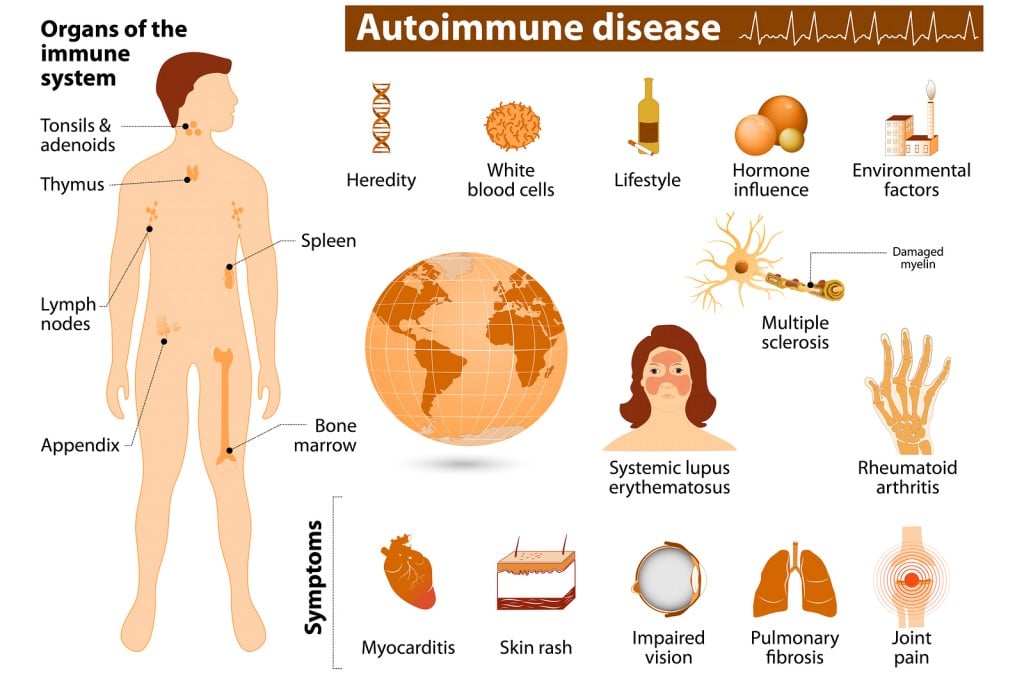 There are many other rare autoimmune diseases that also take a great toll on patients. We’ve reviewed seven of these conditions that biotech is also fighting to treat.

To this end, British-Belgian biotech Apitope obtained positive Phase I results earlier this year for a first-in-class treatment for Grave’s disease. Apitope’s treatment uses a protein to inactivate white blood cells that attack the thyroid gland.

One common misconception of dermatological conditions like psoriasis is that they cause mostly just cosmetic damage and discomfort. However, similar to burn victims, the skin damage can be very serious during flare-ups of the disease. This leaves patients unable to regulate their body temperature normally and makes them vulnerable to life-threatening infections. Today, palliative care and biologics, which block cells or proteins involved in the disease, are available to treat psoriasis. However, antibody treatment may prove to be a more effective approach, and biotechs are racing to bring their treatments to the market.

The Danish LEO Pharma is in the lead with a European approval for its antibody Kyntheum (brodalumab). Following closely behind, German biotech MorphoSys also received an approval from the EMA for its antibody guselkumab, which could outperform the best-selling drug, AbbVie’s Humira, in many rare autoimmune diseases. Novartis is currently comparing its antibody secukinumab to Humira in two Phase III clinical trials. Another contender in the antibody treatments race, Belgian biopharma UCB has positive Phase IIb results for its drug bimekizumab.

Earlier this year, Dutch biotech Escalier Biosciences raised €15M to develop needle-free treatments for psoriasis that target a specific hormone receptor to reduce inflammation. Meanwhile, Samsung Bioepis is driving down the high price tag of psoriasis treatments with its launch of a biosimilar of Janssen’s Remicade (infliximab). Other companies working in this field include Delenex Therapeutics, Sweden-based Affibody, and Switch Biotech in Germany.

Uveitis is a general term for the inflammation of the pigmented layer of the eye, called the uvea, the optic nerve and the gel that gives the eye its shape, known as the vitreous. Uveitis is commonly treated with anti-inflammatory corticosteroid eye drops, which can lead to eye infection and pain.

Like with psoriasis, many biotechs are hedging their bets on new antibody treatments for uveitis, and some have already been successful. For example, AbbVie received EMA approval last year to use Humira (adalimumab) to treat uveitis in children. In the US, the drug has been approved for uveitis since 2016. Novartis has shown, in addition to treating psoriasis, secukinumab can be effective in treating uveitis as well.

Moreover, as cell therapies are gaining more and more traction, biotechs are using the technology to treat uveitis. TxCell, from Nice, France, has been granted EU and US Orphan Drug Designation for its T-cell based therapy for autoimmune uveitis. However, the technology has yet to enter clinical trials. Then there is Apitope, which is also testing its T-cell immunotherapy for Grave’s disease in uveitis and psoriasis patients.

Even more uveitis treatments are on the horizon. Last year, Galapagos and Gilead launched a Phase II trial testing their small molecule filgotinib in non-infectious uveitis.

Sarcoidosis is a poorly understood autoimmune disease in which inflammatory cells build up in certain tissues, particularly the lungs, to form granulomas. These most commonly cause respiratory problems and chest pain, although they can also occur in any other tissues, including the brain.

Janssen’s antibody Remicade (infliximab) has been shown to be effective in treating pulmonary sarcoidosis in an observational study of 46 patients. On the other hand, Centocor, a company owned by Janssen, was not able to demonstrate the efficacy of its antibodies, ustekinumab and golimumab, in a Phase II trial for sarcoidosis.

AbbVie’s Humira (adalimumab) can also be effective in treating sarcoidosis, with Phase II results showing the drug decreased the size of lesions in patients with the disease.

Addison’s disease is another example of a disease that occurs when the endocrine system, which controls the release of hormones, becomes deregulated. Addison’s is caused by an enzyme called 21-hydroxylase, which attacks the adrenal glands and impairs its ability to produce the hormones cortisol and adrenaline. This can cause a range of symptoms including weakness, pain, low blood pressure (due to salt loss) and hyperpigmentation of areas of the skin. Acute attacks can also occur when the hormone levels drop too low.

Addison’s disease is treatable with regular hormone replacement therapy to replace cortisol. However, this can be cumbersome since, like diabetics, patients have to carry around syringes of cortisol for emergency use.

Earlier this year, researchers at Queen Mary University of London used cells in urine to begin generating an artificial adrenal gland, which could help treat Addison’s disease by replenishing the body’s cortisol levels.

Vitiligo is often mistaken for hyperpigmentation of the skin, but is in fact the opposite — the loss of skin pigment. Fashion model Chantelle Brown is known for speaking up about her vitiligo and how the disease affects the health of sufferers, as well as the social problems people with vitiligo have to face.

Vitiligo is commonly treated with corticosteroids and light therapy, which can lead to premature skin aging and increase the risk of skin cancer. Long-term corticosteroid use has a range of side effects, from osteoporosis to increased risk of infection and diabetes. Therefore, finding alternative treatment options can only benefit patients, and European biotechs have some promising candidates.

In Denmark, Vilacta Bio is developing skin lotions that could treat vitiligo by enhancing the immune system using nanoparticle drug-delivery technology. The University of Navarra has results from a Phase I/II trial suggesting that grafting patient-derived melanocytes into afflicted areas of skin could be used to treat vitiligo. Outside of Europe, the Australian biopharma Clinuvel Pharmaceuticals has a candidate in Phase II testing called SCENESSE.

Granulomatosis is a type of vasculitis, or inflammation of blood vessels, which encompasses many syndromes and rare autoimmune diseases, some of which are poorly understood. Granulomatosis can lead to weight loss, fatigue and shortness of breath. It is commonly treated with corticosteroids and immunosuppresant drugs, which can increase the risk of infection.

The University of Groningen in the Netherlands and the US biotech Kineta are researching a drug derived from sea anemones that was found to have a positive effect on the complications derived from granulomatosis. Eventually, this may offer an alternative to corticosteroid treatment.

Increasing numbers of people are being diagnosed with rare autoimmune diseases worldwide. Developing new treatments could help reduce the toll these conditions take on patients’ quality of life and reduce side effects from other therapies. While many biotechs are focusing their efforts on antibody treatments, other technologies like cell therapy are also paving the way forward in fighting rare autoimmune diseases.

This article was originally published in May 2016 authored by Dani Bancroft. It has since been updated to reflect the latest developments in the autoimmune disease field.