Mark Post is a researcher at the University of Maastricht and co-founder and CSO of Mosa Meat, the Dutch company that will bring the first lab-grown beef burger to the market. I asked him about his motivations and plans to make cultured meat a reality in the coming decade.

Cultured meat is an animal-free, lab-grown product identical to the burgers you can find at any supermarket, but which has the potential to address huge global problems such as world hunger and global warming in the coming years. Plus, it would eliminate the need to harm animals in the process.

After producing the first cow-less burger, which was tasted live in London back in 2013, Mark Post has become the public face of cultured meat. That first burger cost a massive €250,000 to grow, which was financed by Sergey Brin, co-founder of Google. The price has since dropped to around €10 per burger, and Mark Post is now working to bring in vitro meat to the market through his company Mosa Meat.

Many are following his steps: pork, chicken, duck and turkey are being grown around the world, and two other new companies, Memphis Meats in the US and SuperMeat in Israel, recently started working on their own cultured meat products. The field is now transitioning to the business stage and investors worldwide are keen on taking part in this revolution. I talked with Mark Post about how and why cultured meat is taking over.

Using tissue engineering for meat production may arguably be even better than for medical applications, which are definitely exciting and could be extremely helpful in the future to extend our lives. Which is nice, there is no question, but if you look at the benefits for the planet and for the environment, food production and security for 9 billion people is going to be a more important issue. We might live with artificial organs for a much longer period and without disease, but if our planet is going to be barren, then what’s the point?

Animal welfare is an added benefit, there’s no doubt. Most of the companies are run by vegetarians and vegans. And it’s going to be important for consumers, eventually, and for acceptance. However, if I have to prioritize, I think the environmental impact of protein production alternatives for beef and pork is even more important. Animal welfare issues won’t matter if we don’t preserve this planet.

When will we be able to buy it in the supermarket?

For small-scale, somewhat expensive products, most companies will have cultured meat products on the market in 3-4 years. For it to become a commodity, such that the price is equal to regular meat or even lower, scale-up is required so it will take longer. You don’t need a tremendous scale to get to that lower scale level. Price-wise, it will probably take another 3-4 years for the price to come down to the level where it’s acceptable for larger public.

But most of the companies have, in addition to a commercial goal, an idealistic goal that is either to reduce animal suffering or to improve the environmental footprint of meat. For that, a huge scale operation to transition an entire industry is needed, and that takes decades.

How is Mosa Meat planning to get there?

Mosa Meat is a startup spin-off from the University of Maastricht. We are currently in the financing stage, which will probably end before the summer. We’re focusing on beef, because that’s the biggest threat to food security and the environment. And we are going to target the European market first.

Cultured meat has to go through novel food regulation in Europe, meaning that you have to show and convince the authority that the product and the production system are safe. Recently, the system has been streamlined into an 18-month procedure and cultured meat is already mentioned: regulators are ahead in the game.

A sizable minority of people is willing to try this and seize the benefit, which is more than enough for us. Some studies say “well, the majority of the people don’t want this,” but it’s a completely new technology and a new product. The question is, is there a volume of early adopters that is willing to start with this? And that volume is large enough.

Where is the funding coming from?

It’s pretty difficult to get public funding for cultured meat, which is kind of annoying, but it is how it is. But private funding is relatively easy. It seems unusual that investors are actually lining up spontaneously so that we don’t have to go out and ask for funding — people are actually offering it. Obviously, it’s going to be a huge market if it succeeds and the benefits are clear for most people. 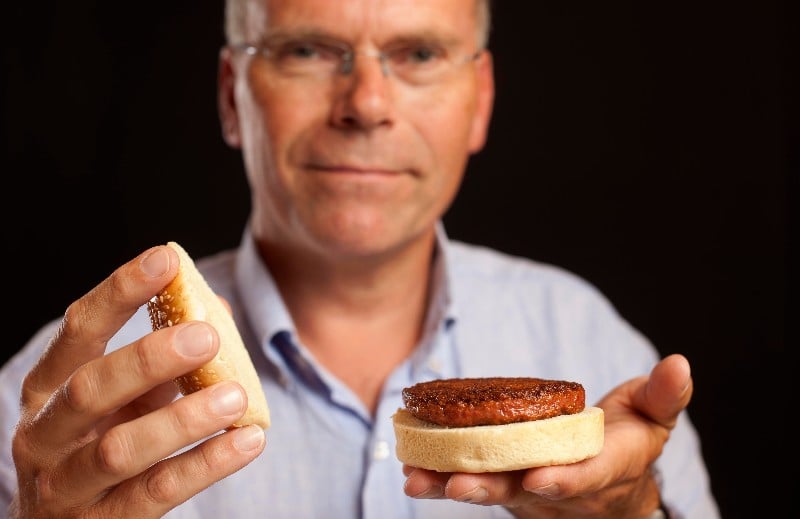 Are you concerned about competition?

At the moment, there’s no competition because no one has a product yet on the market. But there are secrecies. And that will probably increase because of external funding. Having said that, there are some initiatives now in the funding community to align those interests, and then we are very willing to engage in those discussions. A lot of the funders that are funding Memphis Meats and SuperMeat are also funding us. From their perspective, it may at some point no longer make sense to just let these three companies compete with each other but let them share information. Then, development as a whole will go faster.

What are the next steps for commercialization?

One of the ways of doing this that has been pioneered in the biomedical field for stem cell therapy is to grow cells on microcarriers. Any of the cells, for any of the species, require being attached to a surface, so you cannot grow them in suspension. Microcarriers are little spheres a tenth of a millimeter in diameter suspended in the medium, and the cells grow on the surface of these spheres. The second big thing is that we need to be able to culture the cells without using serum. We will manage that, but it still needs optimization.

Note: Serum, a component of the medium used to feed the cells, is commonly obtained from bovine fetuses as a product of the meat and dairy industry.

We are working on fat tissue to add to the muscle tissue, because we think that’s important for taste and for mouthfeel. If you want to produce a steak, a filet mignon, you will have to co-culture these cells. That’s a scientific challenge, but it has been done for many other cells, and I don’t really see a good reason why it could not be done for fat cells and muscle cells.

That’s part of the plans for the near future, but we haven’t ventured into that yet. Because it not only requires co-culture. It also requires a bigger 3D structure with materials that can be done with 3D printing or any other form of 3D fabrication. And you also need a channel and perfusion system, so that you can get the medium, the food, into every little corner of the tissue. All are doable, but together it’s rather complex and requires quite a bit of development.

It was great to have an insight into in vitro meat from a pioneer and entrepreneur like Mark Post, who is translating the science into a reality. Cultured meat will be here sooner than many would have thought when the field started around a decade ago, and it will address the problems of our growing population. Investors and customers are already lining up, will you jump in as well?