NightstaRx has raised €39.5M that will go towards three clinical programs testing gene therapies for rare diseases that cause blindness.

NightstaRx is developing gene therapies for genetic retinal diseases that cause blindness, with technology from the University of Oxford. Now getting closer to the market, the company has closed a Series C round with $45M (€39.5M) that will go towards progressing its pipeline. The fundraising was backed by existing investors Syncona, the VC arm of the UK’s Wellcome Trust, and New Enterprise Associates (NEA), which were joined by two new names: Wellington Management and Redmile.

NightstaRx has announced the money will fund an upcoming Phase III trial with its lead candidate NSR-REP1 in choroideremia, an ongoing Phase I/II study in X-linked retinitis pigmentosa and a planned Phase I/II program for inherited macular dystrophy. All indications pursued by the company have no effective treatment approved.

The biotech’s technology is based adeno-associated virus (AAV) vectors that deliver functional genes to patients with mutations that affect their sight. The DNA is delivered via an injection under the retina as a one-time treatment. 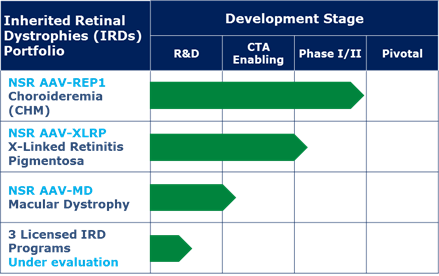 NightstaRx’ lead candidate, NSR-REP1, delivers a copy of the REP-1 gene, which encodes a protein involved in absorbing nutrients. Mutations in this gene, located in the X chromosome, cause choroideremia, a rare disease in which the retina degenerates slowly over the years, eventually leaving patients blind. A previous Phase I/II trial with NSR-REP1 in six patients with choroideremia where only one eye was treated showed significant improvement in their vision three and a half years after receiving the therapy.

Gene therapy is particularly suited to treat the eye, where it can sustain long-lasting gene expression without inducing an immune response, which has led many companies to develop their own approaches for multiple diseases affecting this organ. One of the most advanced is Spark Therapeutics, in the US, which expects FDA approval for its lead candidate in retinal disease this year. A second candidate, SPK-7001, is in Phase I/II for choroidemia, where it might have to compete with NightstaRx.

In Europe, most efforts are found in France. From there, GenSight is running two Phase III trials in the rare genetic disease LHON; Horama is in Phase I/II in another rare condition, LCA; and Eyevensys will soon start a first trial in uveitis with the first gene therapy that does not use viral vectors.