ProQR is the result of a personal quest against cystic fibrosis started by its CEO, Daniel de Boer. Interested in his story and the company’s unique approach to treating the disease using RNA technology, I  decided to speak with him.

Daniel de Boer founded ProQR in 2012 following a strong determination to improve the lives of people with cystic fibrosis. “We started ProQR Therapeutics for a very personal reason,” he told me. “Eight years ago, my son was born, and diagnosed with cystic fibrosis. At that time, I was a serial entrepreneur in IT. I decided to make a career switch and start a company to develop drugs for cystic fibrosis, but then also for other genetic diseases.”

One would think that a person without a background in biotech might have it difficult to succeed, but de Boer is not the only to have so far successfully undertaken this endeavor. Over in France Karen Aiach built Lysogene to treat her daughter’s rare genetic disorder, while in the US the story of John Crawley and his company Amicus Therapeutics, founded to help his two children’s diagnosis, went so far as to inspire a movie. The determination and motivation of these parents seem to overdrive any challenges they might have faced because of their limited experience.

De Boer set out to create a business plan for his new company and found out that there was already quite a lot of activity, especially in approaches using small molecules or gene therapy. “We decided that we really wanted to add something new to the space, and take a completely novel approach.”

So he started looking for a new technology, and he found it. “Around that time, I met for the first time with some people in biotech, including the CEO at Alnylam, John Maraganore, and we talked about how they used RNA approaches for genetic diseases,” says de Boer. 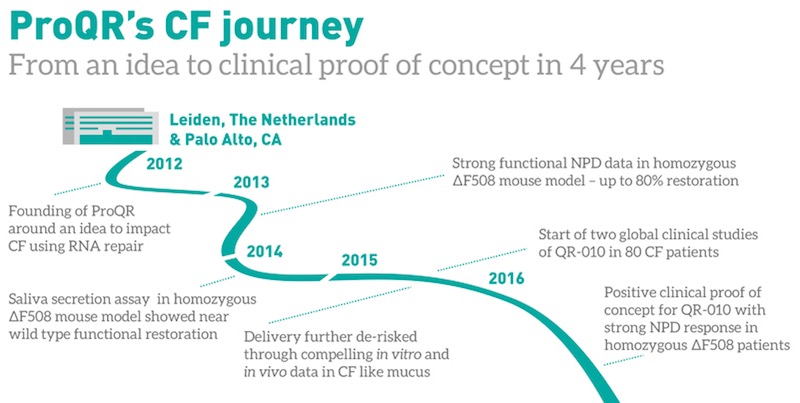 Technologies targeting RNA are quite new compared to those that target DNA such as gene therapy. But RNA-based treatments have started to gain traction in the last few years. There are multiple ways that RNA can be used as a therapeutic, but its distinctive advantage over gene therapies and the likes is that it does not permanently change our genetic makeup, making it possible to reverse its effects.

Today, RNA technology is being tested in multiple rare diseases caused by genetic mutations, such as hemophilia, porphyria, or iron overload disorders. “I thought, ‘if you can do that for all these other genetic diseases, why not for cystic fibrosis?’” says the Boer. “With that in mind, we started ProQR.”

Today, ProQR has two programs already being tested in the clinic, and a third that is about to. “We’ve really built it out from that original plan to target genetic diseases at the RNA level.”

ProQR’s first program, now the most advanced in its pipeline, is an RNA oligonucleotide that targets the cystic fibrosis gene CFTR. The molecule, known as QR-010, or eluforsen, specifically targets a mutation of the gene called F508del, which is responsible for over 85% of all cases of cystic fibrosis. ProQR’s RNA drug binds to the mutated RNA to restore the production of a healthy CFTR protein.

“To date, we’ve dosed about 85 patients, and found that QR-010 improved their respiratory symptoms,” says de Boer. After these first studies in humans, ProQR is now preparing for larger trials that confirm these results.

The technology of ProQR has caught the eye of Galapagos, one of the largest biotechs in Europe. Together, they are working with a new RNA editing technology called Axiomer. “The Axiomer technology allows us to basically do what CRISPR does to the DNA, but to the RNA. We can micro-surgically substitute individual nucleotides in the RNA to correct mutated RNA to the wild-type sequence.”

According to de Boer, this technology could be potentially used in over 20,000 different disease-causing mutations and have certain advantages over the popular CRISPR-Cas9 gene editing. “I think CRISPR is a very promising technology that’s still very early. There are still some concerns about safety, and about the ethical aspects of changing genes in people. With the RNA Axiomer approach, we don’t have those concerns.”

Although the company was initially created to treat cystic fibrosis, ProQR is now seeking to help patients with other rare diseases. The company is conducting a clinical trial in blind patients with Leber’s congenital amaurosis, and is about to start another in dystrophic epidermolysis bullosa, also known as “butterfly disease” because it turns the skin of children as fragile as a butterfly’s wing.

ProQR has also spun out a company, called Amylon Therapeutics, which will work independently to use RNA in diseases affecting the central nervous system (CNS), starting with Katwijk’s disease, a rare disorder that causes strokes in middle-aged people.

“What we did, early on, was to determine where oligonucleotides can have the most impact,” de Boer told me. “Oligonucleotides have historically had delivery challenges, so we chose to target, initially, diseases where the target organ is relatively easily accessible.”

Indeed, the history of RNA drugs has been somewhat turbulent. Back in 2006, a Nobel Prize awarded to the discovery of RNA interference (RNAi) led to massive investments to use it as a therapy. The most notable was Merck’s acquisition of Sirna Therapeutics for $1.1Bn (€940M). But soon after, side effects started to appear in clinical trials and most big pharma shied away — including Merck, which sold Sirna for almost a tenth of the acquisition.

These side effects were attributed to the systemic delivery of the RNA medicine, interfering with healthy organs when it spread beyond its target. RNAi delivery has improved since then, but there is still not a drug approved — though that situation might soon change.

Alnylam Therapeutics, in the US, is currently the center of attention in the RNA field. After a successful clinical trial in patients with a rare disease called ATTR amyloidosis, the company is expecting to become the first to launch a therapy based on a form of RNA technology known as RNA interference, which could happen as soon as this year.

If Alnylam’s drug is approved, which so far seems likely, it will be a big win for everyone in the RNA field as it will prove the technology has real potential to become a therapy. And it will definitely help ProQR win the trust of investors, which seem a bit skeptical of the technology for now.

De Boer seems confident that it will all work out according to plan. “We’re well-equipped to drive these programs through the patients,” he told me. And he is certainly not lacking in motivation to get it done.