How has CRISPR changed drug development? How do you negotiate a good partnership? What are some of the hard decisions to make in founding a biotech? These are some of the questions that industry experts answered at Labiotech’s first Insider Day.

Held exclusively for members, Labiotech’s first Insider Day aimed to explore the different aspects of growing a biotech company. Experts from a wide variety of backgrounds including biotech companies and VC firms discussed key questions on the minds of everyone in the biotech industry such as building the best partnership and how to navigate the founding process.

CRISPR’s impact on the biotech industry 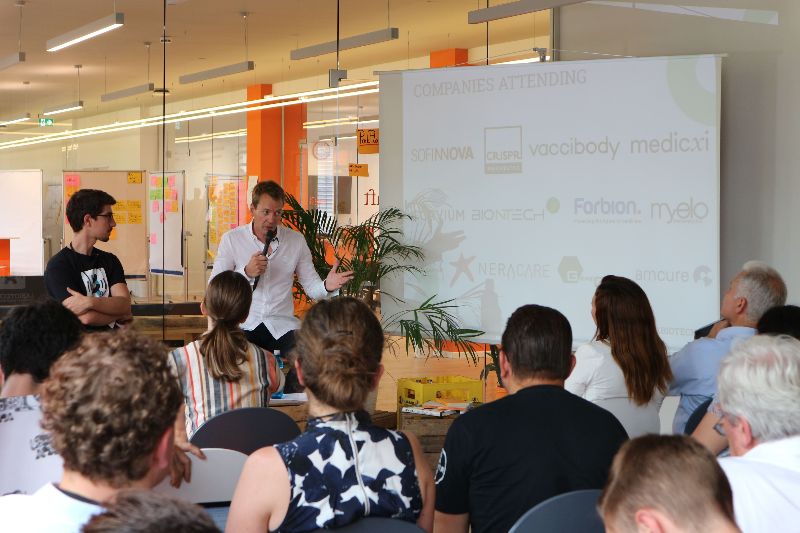 The gene editing tool CRISPR/Cas9 is making it easier than ever to precisely tweak DNA code and correct mutations, showing enormous potential in therapeutics. While many labs today could not work without CRISPR, it was a challenge to build a company around it back when the technology was still new.

The day’s first speaker, Rodger Novak is the President and co-founder of CRISPR Therapeutics, a Swiss biotech that licenses CRISPR technology to commercial partners for use in human therapeutics. According to Novak, it was difficult in the beginning to find investors that understood the best business plan for the technology. The company’s first investor wanted a model where the company could offer pharmaceutical companies the chance to buy into the idea early on.

“We talked to pretty much every pharma company on the planet and everyone was super excited, but they didn’t get it,” he remarked.

Instead, the company focused on identifying good targets for CRISPR treatments, forming business plans for preclinical development, and looking for extra investors. By this point, CRISPR was well known, and it was easier to find investors.

“We were really in a position to say ‘yes’ or ‘no’ to investors,” Novak said. “This was nice because normally you have to knock on a lot of doors.”

With a CRISPR therapy in a phase I/II trial for treating beta thalassemia, Novak is confident that CRISPR Therapeutics is now up to two years ahead of other companies working with CRISPR, including US-based Editas and Intellia.

Novak also stressed that other technologies have enabled CRISPR to be the revolutionary tool that it is today. “CRISPR is not a poster child — it is one of many new technologies,” he added. Examples of these supporting advances include cheaper DNA sequencing, and genome-wide association studies.

In less than a decade, CRISPR/Cas9 has massively impacted the biotech industry. At the research and development level, it is now easier for companies to build animal disease models and validate targets for candidate drugs. The new technology is also making clinical trials more focused, implementing a more personalized approach that is uncommon for the industry.

“The way we look at clinical trials today is almost like research,” Novak said. “This is new to regulators and the pharma industry.”

Novak also cautioned about the use of CRISPR in making germline mutations, like the controversial gene-edited babies announced last year. Right now, we don’t understand enough about the process to make it safe, he said. However, this could change one day, helping people suffering from heritable conditions such as Huntington’s disease.

“We should stay away from this for quite some time while we talk about ethics, but it will come,” he concluded.

Drug development partnerships can be essential for a biotech company to grow and take its pipeline forward. But finding the right partner and negotiating the terms of a deal can be a daunting process, especially for small companies that are just starting out.

Europe’s largest private biotech, the German immunotherapy company BioNTech, has a history of lucrative partnership deals with big companies including Pfizer, Sanofi, Genentech, and Genmab. However, according to Holger Kissel, BioNTech’s VP Business Alliances, these deals are difficult to finalize. “For every deal we did, there were two other deals that we didn’t do,” he said. “There are around three different negotiations for every deal we did.”

BioNTech had problems at the beginning finding pharma partners to fund its relatively unknown technology based on mRNA drugs. “There’s a herd mentality of the pharma industry,” Kissel said. “There is a headline that everyone’s going for. It doesn’t matter if you have good data — it’s difficult to get attention.”

BioNTech was able to get many partnerships by making a connection between the scientists in each organization, rather than just the business people. Furthermore, Kissel believes it’s essential to formulate and defend your upfront price. He advised the use of benchmarks from the industry as a starting point, and to always be able to justify why your offer is worth it.

“You need to build your upfront in a rational way that you can justify,” Kissel said. “Without just giving numbers, you need to believe in it and they need to be able to understand it.” He added that being transparent with the upfront calculations helps the prospective partner’s representatives to defend the deal in front of their own executives.

As a company grows, it can become more selective with the deals it signs. For BioNTech, which has over 1,000 employees, deals with just a €30M upfront are no longer worth it. “We can’t do small deals anymore,” explained Kissel. “The stress and the work of getting the deal together isn’t worth our time.”

Michael Koeris, co-founder and Chairman Of The Board Of Directors at Corvium

Founders of startups often have hard choices to make along the road to success. Originally from Berlin, the founder of the US-based food safety biotech Corvium, Michael Koeris, said that failures are part of the learning process. “All the lessons that I learned are based on failures. I failed a lot,” he explained.

Coming from an engineering background, Koeris always found it hard to decide when to continue and when to abandon an idea. For example, his diagnostics technology platform had many potential applications when starting out, which turned out to be a curse as much as a blessing. “You have to pick one thing usually and you’d better be right. I wasn’t the first time around,” Koeris said.

Koeris emphasized the importance of raising enough funds to support the growth of your company. It isn’t always easy, as investors don’t share the founder’s dedication because they have multiple projects, rather than just the one company.

“Chickens lay eggs and stay alive and pigs get made into ham, and they’re dead,” he explained. “You as the founder are the pig and the investors are the chickens. Therefore, you and they have a different vested interest in the company.”

Koeris worked for a year at the VC firm Flagship Engineering, which helped him to gain an in-depth look at what investors are looking for. To him, it’s important to be aware of the limitations that a VC can impose on a company when you are choosing funding options. “VC is Faustian marketing … When you take VC money, a lot of options are gone,” he explained. “You can’t go slower or get other sources like crowdfunding, because the VC are financing you. You have to make the money into something more for the VCs to take.”

Migrating from academia to industry 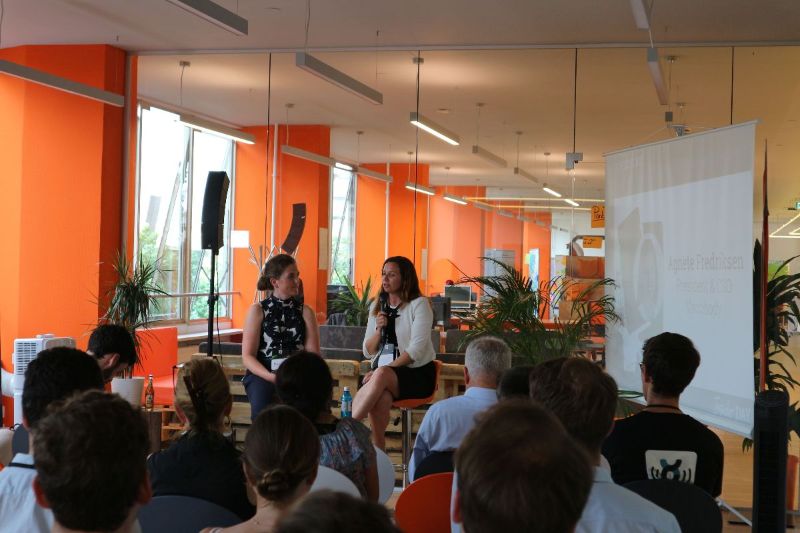 Biotech founders come from a wide range of backgrounds. Some are savvy entrepreneurs, while others are fresh academics with a desire to change careers. All have to face the uncertain beginnings of a startup.

Agnete Fredriksen co-founded the Norwegian cancer vaccine biotech Vaccibody in 2006 after her PhD. At the beginning, she worked part time as CSO alongside a full time post-doc position. “I don’t want to claim that I had a clear idea of how to fund a company and start it,” she related.

Finding support from academia was a hard task for Frederiksen when trying to build a biotech company in Norway. “Europe is behind the US, and Norway is behind Europe. I felt that it was tough, there was only variable support,” she said.

Despite this challenge, Fredriksen’s determination has allowed the company to reach the clinic. Vaccibody’s lead candidate treatment recently completed a phase I/IIa trial for the treatment of head and neck cancer. According to Fredriksen, one of the reasons for this progress was that she never took any advice at face value, even from experts.

“I was bugging people saying ‘why are we doing this?’ If the answer was ‘this is how we’ve always done it,’ and they couldn’t explain the rationale, we never ended up doing it,” she said.

Watch Fredriksen’s full talk: How to Manage the Science of a Biotech Company

The inner workings of VC firms

To gain funding, biotechs often turn to specialized VC firms. Far from being passive pots of money, one may forget that VCs have their own goals, competitors, and stakeholders.

According to Holger Reithinger, Managing Partner at Forbion, VCs have to compete and adapt themselves to marketplace conditions, such as geographical locations. “What we are doing is being entrepreneurial,” he said. “We have to anticipate the future.”

One entrepreneurial activity that the VCs must do is coexist and compete with each other. “We are ‘frenemies’ with a big ‘fre-’ at the front,” said Giovanni Mariggi, Partner at London-based VC firm Medicxi. “We’re all part of the ecosystem and must find ways of working together. When you are differentiating yourself as a VC firm, you need to find your own angle.”

VCs also need to raise funds just as biotechs do. However, this process is different from biotech fundraising due to a lower tolerance for failure from the investors. “For a biotech, if something fails, you pivot,” said Mariggi. “We take longer to deliver but we need to make sure we stay on strategy because our limited partners are committed and don’t like change too much.”

Due to this difference in mindset, investors have to be careful about which biotechs get the investments. According to Cedric Moreau, Partner at Sofinnova, the executive team of a company is the first thing that the investor looks for when deciding where to allocate the money.

“We sometimes say ‘This is a really interesting approach, but these are not the right people,’” he said. This isn’t a firm ‘no’, but in some of these cases the VC will only fund the company as long as the staff are changed. Therefore, choosing the executives in a biotech company may win or lose you the battle for funding early on.

Watch the full talk: The Best VCs in Europe: An Insider Discussion

Join us next time

On a sweltering hot day in Berlin, we all learned a great deal from the gathered experts, and enjoyed bagels afterwards. Immediate feedback from attendees was very positive, especially regarding the in-depth talks and specific advice. In the coming weeks, we will be sharing with you the videos of all the talks, so stay tuned! If you attended, let us know what you thought! 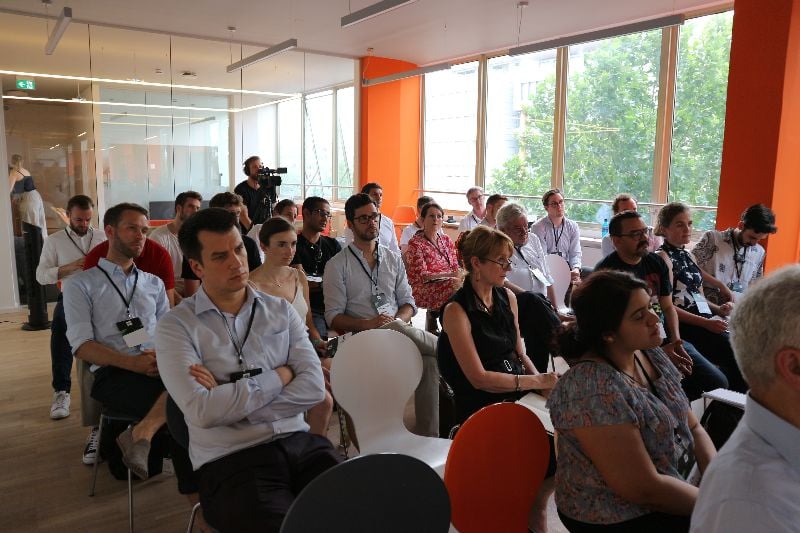