Big pharma CSL Behring will pay the Dutch gene therapy developer uniQure an upfront of €400M for the global rights to a phase III-stage gene therapy for the blood disorder hemophilia B.

Under the terms of the agreement, uniQure will complete an ongoing phase III trial of the gene therapy, with topline results expected by the end of this year, as well as validating the manufacturing and supply process of the therapy. CSL Behring will then reimburse these costs and take over the commercialization of the candidate worldwide.

In addition to the €400M upfront, uniQure can expect up to €1.4B as the gene therapy reaches undisclosed regulatory and commercial milestones. The company will also be entitled to royalties of up to around 20% on net sales.

Hemophilia B is an incurable genetic disorder where the patient lacks a protein called factor IX that is required for blood clotting, resulting in uncontrolled bleeding. The main treatment option is to receive factor IX obtained either from donor blood or made through industrial fermentation. However, patients need regular infusions and the treatments can become less effective over time.

UniQure’s gene therapy consists of delivering the genetic instructions to make factor IX into patients. This therapy is designed to work with one dose, and could theoretically last for many years, providing a functional cure for the condition. In a phase IIb study last year, the therapy was able to restore the levels of factor IX to over 40% of normal levels, which is considered sufficient to stop bleeds.

“We are exceedingly encouraged by the data we’ve seen,” stated CSL Behring’s CMO, Bill Mezzanotte. “Not only has the treatment option demonstrated robust clinically meaningful responses in factor IX activity, but it has also exhibited excellent safety over multiple years of observation.”

CSL Behring is already a vendor of factor IX for infusion treatments of hemophilia B, so the gene therapy acquisition expands its assets in this indication.

The proceeds of the deal will finance the development of uniQure’s gene therapy candidates for liver conditions such as Fabry disease, as well as undisclosed cardiovascular diseases and indications related to the central nervous system. The most advanced of uniQure’s pipeline is aimed to treat the neurodegenerative condition Huntington’s disease, with efficacy results of a phase I/II trial expected next year.

There is a scramble around the world to develop the first-ever gene therapy for hemophilia B and hemophilia A, which is caused by a different mutation to hemophilia B. The frontrunners in the hemophilia B race are uniQure and Spark Therapeutics, which has a development agreement with Pfizer. Pfizer and Spark’s gene therapy is in a phase III trial that is expected to finish late next year.

Clinical-stage contenders for hemophilia B gene therapies. Data from GlobalData. 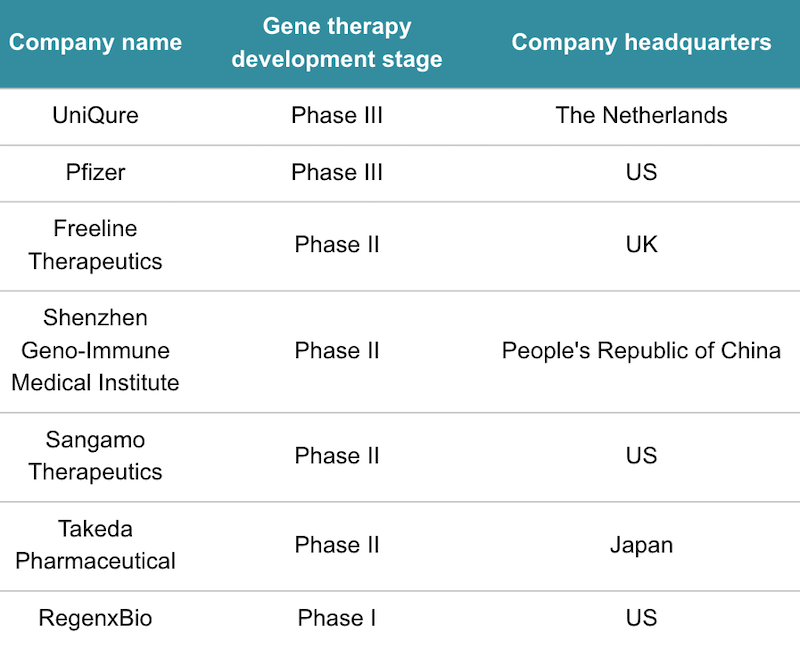