Paris is well-known for being the most beautiful city in the world. But did you also know that it concentrates most of the French Biotech industry and is Europe’s biggest biocluster? If not, why didn’t you know?

The Eiffel Tower, the Louvre, Notre Dame and so many other monuments makes Paris outstanding and unique. But Paris is also Europe’s second biggest metropole with over 13M people, following the 18M of London. It’s the center of the French economy, politic, education and research, the country being very concentrated. Paris has excellent research (50% of the French research), is the biggest European city for Pharma (Sanofi, Servier, Ipsen etc.) and counts very strong political support (some people even describe France as a fiscal paradise for tech/biotech companies because you get high-amount of state money to fund your company and pay nearly no taxes).

I looked up at the stats about Biotech companies in different regions but I rapidly gave up after seeing the mess. Nobody has the same definition of biotech or the same criteria, which makes it really hard to compare. Medicen, the cluster organization of Paris-region, says there are 150 Biotech companies in Paris while Berlin says 220, and London/MedCity brings out an extravagant number with 900 companies… Each cluster seems to pumps up its number to flatter the politics who fund it and to shine on international conventions.

Let’s try to take another data, our own database of Biotech companies, Labiotechmap.com. We established selection criteria (€1M raised/revenues and proprietary technology) to pick up the companies and give to our 3000+ users the best map possible.

And here are the results (I selected only the main European cities to increase the clarity): 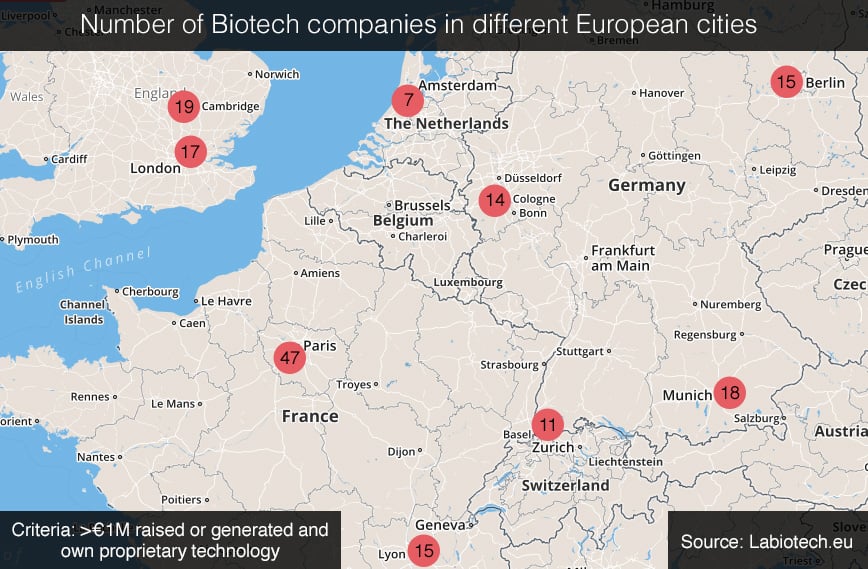 As you can clearly see on the picture above, Paris is leading the way in Europe. It counts 47 Biotech companies matching our criteria, followed by Cambridge-UK, London, Munich, Berlin, Lyon, Cologne, Basel and finally Amsterdam. Sorry to Belgium, I also wanted to add you, but your biotech industry is not concentrated in one city but in Ghent, Leuven and Louvain-la-neuve.

Here is a list of 5 Parisian Biotech companies which have been extremely successful in the last years:

Of course, the number of companies doesn’t say everything about a cluster. The money it was able to attract or the number of employees is very important as well. On this side, Paris has been doing very well lately. In 2014, almost as much money has been raised in Paris than in London and the stock market now counts 38 Biotech companies, the European record!

Until the end of the 20th century, Paris/France was clearly lagging behind compared to the UK, which started focusing on Biotechnology earlier and had big successes like Cambridge Antibody Technology. Paris not only caught up but outpaced the UK in many aspects.

Now the question you may ask yourself is why nobody knows Paris as the biggest biocluster of Europe?

I think there are 3 main reasons: dilution, internationalisation and politics.

The first reason is that Biotech in Paris gets diluted in the other leading industries (tourism, finance, culture). The Biotech industry is not big enough to stand out compared to other industries.

Next, French companies are still reluctant to go international and tend to stay on their own market. People there prefer to do small business in French instead of big deals in English (I’m exaggerating a bit but not so much). That’s less true for Biotech, which is by nature global, but it’s still noticeable in some companies.

The last reason is the performance of the politics/cluster management. Medicen, the cluster of the region, has been recognized as one of the worst in France (public ranking of the 70 French clusters). The director is changing nearly every year, the dynamicism in Paris is not what it should be in terms of Events/Initiatives, and many Biotech companies are still wondering what the 12 employees of the cluster are really doing for them…

This article has not been sponsored by Paris or by anyone. It shows a different view than the cluster’s marketing/biased stats and is also based on the feelings I had by visiting the majority of the cities listed in the picture above.

And you what’s your opinion about it? I would be curious to know what you’re thinking.

Ps: Note to the European clusters, please do not be angry at me.